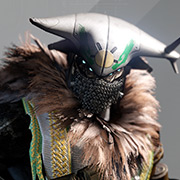 The ammo system should be reworked for Destiny 2.

I agree and like one or more of these ideas.

I personally think the current ammo system (in PvE, particularly) is too inconsistent, especially for raids where you might need a particular ammo source at a particular time. I've noticed far too many times that when throwing a grenade into a group of cursed thrall, the ammo outcome is rather unpredictable. Sometimes I'll get a decent mix of primary and special ammo, and other times I'll get an abundance of heavy ammo. While this might seem a blessing to others, I think the inconsistency is a nuisance and a bother. Sometimes I'll experience sudden droughts of a particular ammo stock. It's especially bad when I run low on primary because then I'm forced to waste precious special or heavy ammo on minor enemies like dregs or acolytes. I'm suggesting ideas that will give you sure fire ways to get any ammo you might need at any time. 1. This would be the most elementary way to fix the unpredictability of the ammo system. Rather than random chance, give each ammo type a set number of kills needed to drop a brick of the ammo. Something like two or three kills for primary, ten for special, etc. 2. This would give you the option to get any ammo type whenever you needed, but would only provide bursts of ammo rather than a constant stream. Essentially, special and heavy ammo would be tied to your abilities. Primary ammo would drop from weapon kills, special ammo would drop from grenades and melee ability kills, and heavy ammo would drop from super kills (or kills while affected by supers). 3. This would be the best way, in my opinion, to fix the ammo situation. Ammo would drop based on which enemies you killed. Killing enemies with red bars (minors) would drop primary ammo only. Killing shielded enemies like Captains or Wizards would drop special ammo. Finally, enemies with yellow health bars (majors and ultras) would drop heavy ammo. So, what do you think, and which is your favorite? Feel free to comment any of your ideas.
English
#feedback #Weapons #ammo #Abilities #majors #minors
Comentar Respuesta Abrir tema
Denunciar