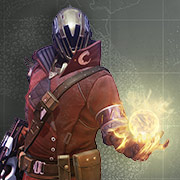 For one, you are not a Veteran. This game hasn't been out long enough for anyone to be a veteran, even if they didn't sleep and played through every second the servers are up. People with the title veteran actually fought for something, were either drafted or volunteered for service. All you did was buy a damn game. Thank you for your "sacrifice" I'm sure you lost a lot of Doritos to the cause. Tell your mom not to forget the meatloaf. What? You played the super-alpha-beta of Destiny?!? Congrats! Put that on your next job application and resume. I don't think you will get a "veterans" preference, unless it's for the next flavor of Doritos taste tester. Go spend some time at your local VA hospital, and meet some real veterans. Seriously though, this hashtag is stupid and you all need a new mantra. Try the words Elder Guardian or be creative ffs. If you have any decency of knowing what comes with that title, you won't compare it to the privilege it is to even play video games. Now I'm going to go get some damn do-rites. Edit1: Thanks for the convo BS, has been fun. Gotta go to the real world now, have fun trolling, you're pretty good at it.
English
#feedback #VeteransUnite
Comentar Respuesta Abrir tema
Denunciar