May 21, 2015 - DeeJ
This week at Bungie we opened The Reef.
A lot had been said about House of Wolves. The ramp to launch was long and steep this time. Old pre-launch narratives of “You’ll figure it out when you play” had become obsolete. Millions of eager Guardians were ravenous for tactical intel about their next fight – and we were all too excited to talk about it. After all was said and done, we hope there was still a secret or two left in the vault.

“Offer the riches of our realm as Bounty…” – The Awoken Queen
Do you think Her Royal Highness anticipated having to pay out 11 Billion Glimmer on day one? Let’s hope those treasure rooms are piled high. By the time the Cryptarchs finished reading their Wolf Hunt Decryption Manual (Abridged Edition), there were over 105 Million Engrams to decrypt.
We hope they didn’t disappoint you too much.
The stampede on May 19th was… impressive. Not even the arrival of the KinderGuardians of Christmas could match the numbers we saw for the opening of Wolf Hunting season. As of 11AM on the third day of fighting, Skolas has been captured almost 900,000 times, and evicted from the Prison of Elders with extreme prejudice over 9,000 times.
Your enthusiasm has been humbling. Thank you so much for playing. It’s been an honor to share this new adventure with you, and a pleasure to see you devour it with a royal appetite for carnage and mayhem.
House of Wolves has a few more secrets tucked up its sleeves. There are battles that have yet to even begin.
Face the Trials
Variks has been getting all the love in the Reef. Over in his dark corner, smoldering in the flickering candlelight, Brother Vance waits his turn to test your mettle.

On Friday, May 22, at exactly 10AM Bungie Time (we’re on the West Coast), the very first Trials of Osiris will begin. If you crave more details, we have an event site set up for you right here on Bungie.net. Read up on the rules, regulations, milestones, and other details that might help you emerge triumphant.
If you’re ready to fight, or if you think you are, we have some combatants for you to keep an eye on. Twitch will be hosting a Trials of Osiris Challenge. The winner will earn a cash bounty redeemable for the charity of their choosing. The Bungie Foundation will be matching the purse.

Who do you think will have the best scorecard?

The games begin as soon as Trials goes live. You have a chance to be a part of this event. They’ll need opponents. Don’t make this easy for them. You could end up being the terror of their stream, in front of a captive Internet audience!
If you’re sidelined for the opening, you can always watch. A battle this royal deserves an audience.
Call to Action
The Queen is not the only beneficiary who is grateful for your aid.
The Nepalese who have recently befallen great tragedy are also receiving unprecedented love from this community. We’re not ready to share the final number yet (there’s still more time to escalate it), but you should all be proud of your collective sense of charity. Guardians to the Aid of Nepal is easily the biggest fundraising drive the Bungie Foundation has ever conducted with the players of our games. 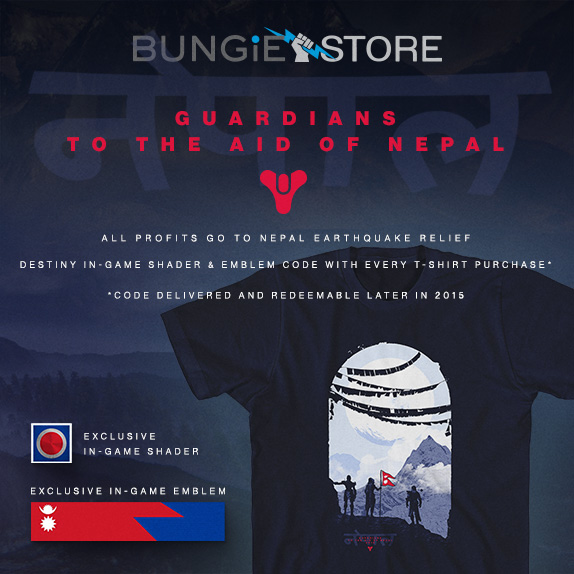 You have a few days left to make your mark, buy a t-shirt, and score a sweet in-game shader with an awesome story behind it. The campaign ends this Sunday. Next week, Bungie Foundation Manager Christine Edwards will be back with the final stats.
Thank you for being awesome.
Treasure Room
If you still have room in your closet next to that Nepal t-shirt, there’s also new stuff in the Bungie Store! 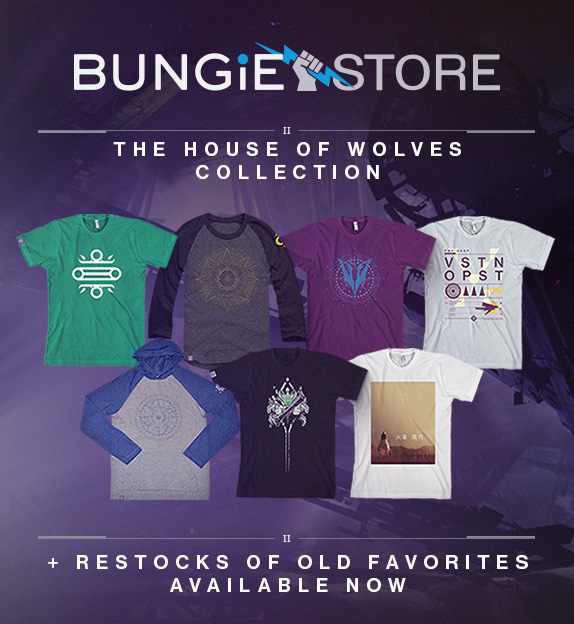 To whom are you loyal? The House of Judgement? The Awoken? Osiris? The House of Wolves? Fashion?
Tell the world with the threads on your back.
Ground Control

Launching millions of Guardians into orbit is dicey business. Fortunately, the Destiny Player Support team is on the scene, looking out for you and keeping you informed.

DPS: Today, Bungie Help launched a new Guided Support feature. This will help players walk through and troubleshoot issues on a step-by-step basis. We are still building our Guided Support base, and currently have pages for Networking and Prison of Elders. Like the new look? Let us know by posting in our #BungieNet Feedback forums.
Some players are reporting that the Speaker does not have the option to exchange materials. In order to see the Speaker’s exchange materials list, you must have your materials in your character’s Inventory. The options will appear according to what materials you have on hand.
Lastly, we have created new Help articles for House of Wolves content. You can now learn more about the much-sought-after Treasure Keys, and how to obtain the Vestian Dynasty Sidearm.
As always, if you encounter any issues in game please make a post in the #Help forums.

The more you talk to them, the more they’ll talk to you.
Rereleased for a Limited Time

Man, I hate getting scooped!
As soon as I saw this video, I tucked it away in safe keeping for this moment. Then it appeared on Reddit and quickly radiated outward across the Internet, like things on Reddit do. No less than twenty Bungie people sent me a link. I almost sent an email to every single person in the building to say: “Yes, I have seen the hilarious video of the people dancing when they should be on a Raid! Please stop bothering me!”
Of course it’s never a bother to see the community doing stuff like this. You might have seen this already, but you’re gonna watch it again so I can give them some emblems to reward their creativity.
[Pro-Tip: Skip to the second minute to get straight to the fireworks.]
WINNER: “For best use of Dragon’s Breath” – Jason Jones

It’s been a great week. We can’t say enough to express our thanks. We’ll keep seeing you in the Reef, and in all the places where Fallen Ultras hold the key to your fortunes.
DeeJ, out.