Jan 22, 2015 - DeeJ
This week at Bungie, we broke a lot of ice. So did you. It’s been a busy cycle.
We began with a visit to the Tower by the Agent of the Nine. You know him as Xûr. He brought with him a prize that many Guardians had coveted. You know it as Ice Breaker. Our mysterious merchant left with a strange haul of 19,436,440 coins - all earned in battle. That’s the gameplay equivalent of 2,159,604 Weekly Heroic Strikes on the highest level of difficulty. Not bad for two days’ work.
Keep your head down out there. With 1,143,320 brand new sharpshooters in circulation, we launched some new activities. Let’s take a look at all the ways you’ve been able to dispense your replenishing ammunition.
Crota’s Rematch
Good games on the Hard Raid. Thanks for playing.
It’s always a little tense at Bungie when a Raid goes live. This was our fourth starting pistol for a herd of would-be Firsters. If we get that right, you get a race. Screw it up, and it’s a riot waiting to happen.
Launching the Raid...

At first, a few hundred replies rolled in from players that needed to turn it off (and turn it back on again). What followed was a land rush armed with superior firepower. The numbers sampled by Bungie User Research are staggering.
Twenty four hours later, 557,354 Raids had been launched. Properly staffed, that’s 3,344,124 Guardians descending into the Hellmouth over the course of a full day. Those stats made this the largest stampede yet – more than double the population of the very first run on Atheon. Community fervor intensifies!
Wanna know who pulled ahead of the crowd?
WORLD’S FIRST
You’re looking at the post-game carnage report for One and Done. 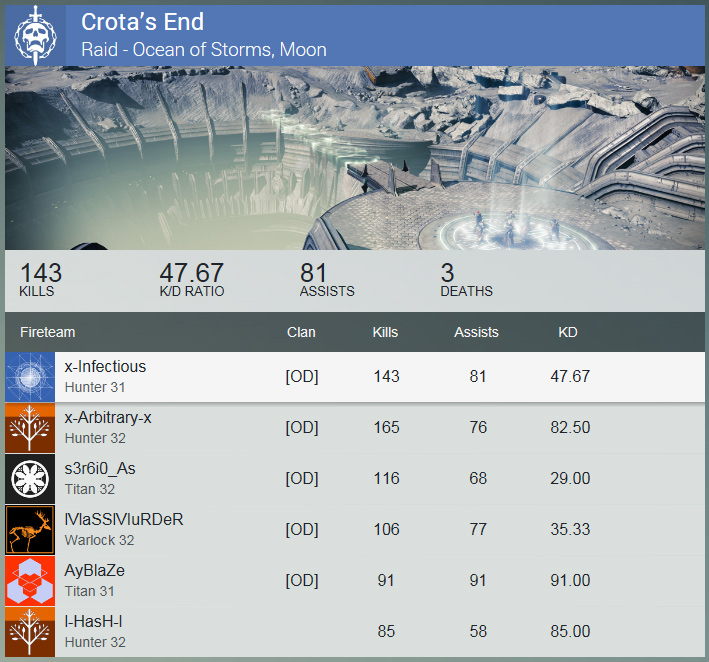 They’re a Bungie.net Clan without a shred of social media to their profiles. In this vocal, media-driven, streaming, raging rapids of a community, it’s nice to see that some silent operators can take us all by surprise. Their origin story should be relatable to many.

“One and Done is a newly formed clan of friends who have been playing competitive games together for a few years now. Some of us actually only met within the first couple weeks of Destiny. Our objectives have primarily been to have fun, and of course win as much as possible.”

This stealth mission was kept under wraps, lest you try and steal their strategies! Don’t worry. I asked the same question you’ve all been asking. You want to know if they took shortcuts.

“To tell the truth, our group has always been lactose intolerant with regards to cheese. We had done several tests within the Raid to develop our strategy and once we realized Crota’s vision was a little impaired toward Hunters, we knew then that this dark horse might win this race.”

Don’t believe ‘em? They sent proof. You be the judge as they hold court in the Hellmouth.
Congratulations, OD. See you around in the Tower, lit by the green glow of legend.
RUNNER UP
If Twitch is your world, tripleWRECK was your First. We placed a bet on these guys by rostering them on our go-live article. The nice thing about Twitchers is that they play the game in full sight, right in front of the Internet and everybody. Easy to track. Nerves of steel.
We talked to Fireteam leader Ari about his party and his audience.

“The WRECKnation ᕦ(ò_ó*)ᕤ is just a small, albeit expanding, community of gamers on all platforms that has grown from my modest live-streaming efforts over the last year. Some of us are competitive, some aren't, but they're all good people and like a second family (though that might sound terribly corny).”

If you find it hard to believe that such a fun-loving group passed you on the road to glory, they were equally surprised.

“I've always been a very driven, competitive person, I went into Destiny solely for the PvP, but tackling a cooperative activity in the game's Raids has been a brand new, though thoroughly exhilarating experience. As a long time gamer, getting to discover something totally uncharted and this addictive is terrific.”

“Our group wholly decided that we wanted to compete for the world's first Hard Mode completion straight up and honest. It was wholly satisfying and we couldn't be happier even though we didn't get the technical #1 finish. The support from everyone was truly astounding.”

Check out the replay of their Twitch-First mission.

Congratulations to every single Fireteam who made the effort to level up and give it a go. We hope you had a good run of it. Hope you scored something nice for yourself, too.
TOP FIVE

If you think these guys make it look easy, prove yourself right. You just might have some fun along the way.
Dual Duel
If you don’t Raid, we still have you covered with fresh challenges. The Crucible is always there if you don’t have an appetite for a prolonged mission against seemingly impossible beasts. This week, you don’t even need six friends. All you need is one.
Have you ever wanted to dial down the Space Magic and see who would win a good, old-fashioned gunfight? 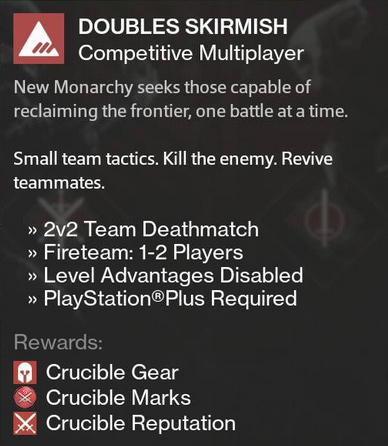 While this was a soft opening, back in December we did forecast some theoretical game modes. Doubles is the first experiment.
Design Lead Lars Bakken describes this engagement as “a slower burn with more explosive pockets.” 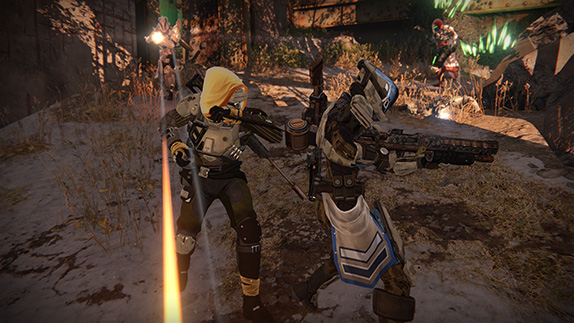 It’s a gun game. Lars advises you to rely more on your wits, your weapon, and a strategy shared with only one other player. “Your Supers will come back more slowly because you’re not getting as many actions per minute as you would in a game of Control.”
Space Magic will be at a premium. Use it wisely for the big plays. The most you’ll ever score is a Double Down, so make it count. 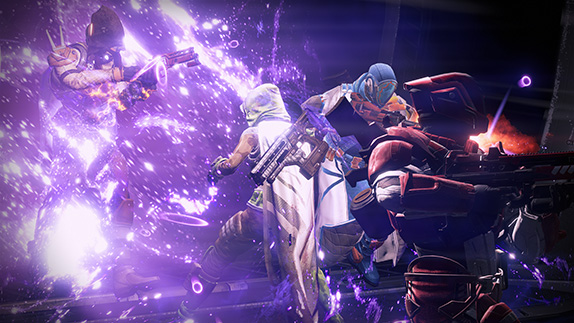 “The goal here was about taking the rules we already have and mixing them up to create a fresh experience,” Lars says. "Each player has the full weight of winning or losing placed squarely on their shoulders and nobody to blame but themselves... or their teammate. No pressure."
Find your best wingman and give it a try. Let us know what you think.
Watchful Eyes - Helpful Hands

While you’re playing, we’re watching. The Destiny Player Support team keeps a sharp eye on the obstacles between you and your fun. This week, they’re sympathetic to all questions about loot and rewards.

Unlocking Hard Mode on Crota’s End brings the burning questions of rewards and how much players can get out of the Raid’s loot table. We have an article that details the loot tables for Raids, as well as Nightfall and Heroic Strikes as well. Be sure to read up and grab all the loot you can find.
Speaking of events, please check out our article on weekly resets. We hate to see players not completing their events in time, or claiming that they didn’t receive credit for the new weekly activities during the reset.
If you find yourself with more questions on how our weekly events work, please check out more of our help articles on this topic by searching the Bungie Help page, or let us know by posting your questions in the #Help forums.

Good hunting.
That’s what happened this week - in plain sight, at least.
Admittedly, this update was a celebratory look back at your achievements. Behind the scenes, we’re still looking forward. We’re working every day to make Destiny perform better and give you new reasons to blow our minds with your contributions to the world we all share.
We’re looking forward to talking to you more about that process. In time. Keep talking to us about what you’re seeing out in the wild, and don’t pull any punches about the things you want us to work on.
That job is never finished. And we’ll have more to share soon about the next updates to the game.