Dec 4, 2014 - DeeJ
This week at Bungie, we made final preparations for the first expansion of Destiny.
With the first update, the cheers roared: Exotic Weapons! An end to crate farming! Two shadowy figures that have been locked in a duel to become the chief villain in Destiny (you know them as Atheon and The Cryptarch) both learned how to better behave in the presence of players.
Then, we telegraphed the next update - the one that will land with The Dark Below. With some help from our friends at Game Informer, we released some details about upgrade paths, new economies, and escalating Light levels. That news was met with a more complicated reaction (more on that below).
The release of the Dark Below will mark the three-month anniversary of the launch of Destiny. Inside our walls, it’s hard to believe such a short time has passed. It feels like an odyssey. Much has happened. We’ve witnessed the birth of new community of players who have defeated all the foes of our creation. Throughout their campaign, they’ve come together to find their collective voice.
We’ve listened. We’ve adapted. The Dark Below will be the twelfth update to Destiny. We’re ready for the next act.

See you in the Hellmouth. If we don’t, we’ll still see you in the Tower. No Guardians will be left behind. All will have new choices to make as they expand on their legend.
Can You Hear Me Now?
When change is afoot, misinformation can run rampant. I saw plenty of it as people digested and debated the upgrade reveals that landed yesterday...
“I can only upgrade one existing Exotic a week?”

No, Xûr will have many of them in stock.

“Is Xûr the only way to obtain new Exotics?”

No. They’ll drop as part of new loot tables.

“So I have to buy new content to keep up?”

No. All players will have options to progress.

“Is the upgrade automatic?”

No. You’ll choose where you invest the effort.

“Does this make all my gear worthless?”

No! I’ll be holding onto my Dead Orbit Heavy.

Confusion intensified. I rushed to update our blog with some more granular information. When coveted weapons are at stake, misinformation cannot stand (man), hence the hasty typing. Amidst the flurry of activity, to make the morning even better, I delivered this gem to the Internet:

Let’s talk about why this is the worst Tweet I have ever sent in my life:
Let me get this straight. The player is never “wrong.” I believe that down to my bones. At Bungie, I represent to the developers what you say without prejudice. Lesson learned: Never Tweet when you’re in a hurry.
Sorry about the confusion. What do you say, Internet. Still want to be friends? If so, join me in an exploration of our plans in greater detail.
Scoring Them Upgrades
Let’s talk a little bit more about what’s motivating this new economy designed to propel the evolution of your Guardian and the arsenal at your disposal. Here are the facts: 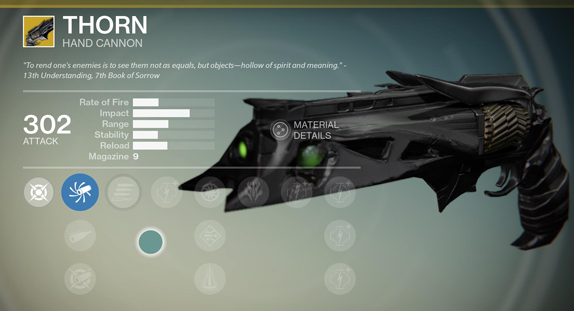 If you’re a Level 30, you’re ready to tackle Crota’s End on Day One (more on that below). If you like your weapons just the way they are, you are welcome to keep them that way. You’ll find that they’re still enormously effective in just about any tactical scenario – even Iron Banner (more on that below).
In the months to come, your quest to become more powerful will have more avenues that lead to satisfaction. The last thing we wanted was for you to look at your favorite gun or helmet and decide that it had become obsolete. Since the reveal, we’ve read a lot of ideas for how this could have been done better. Your feedback is clear: The time you have invested in your stuff should be respected.
That conversation is already raging internally, as it always does. In the meantime, the existing plan is in place to make sure that, as consumers of The Dark Below start to become even legendier, those who don’t opt in aren’t left behind. We’re making these options available to everyone, whether they own Expansion I or not.
As always, the best way to evolve your Guardian in Destiny is to tackle new challenges and earn new rewards. We’re eager to see how you feel about this system once you’ve seen it in practice. If the past three months have proved anything, it’s that anything can (and often does) change in Destiny.
You’re a part of that process, so keep talking to us.
The Constant Gardeners
We’re touching a lot of code with our updates right now. Sometimes, squashing one bug can scare another out from cover. Here are the known issues we’ve discovered since the last time you installed an update, along with what we’re doing about them.
Stay tuned! If the fix is not in the update pipeline, it’s being prepped and giftwrapped. Never hesitate to report these little buggers right here. We have a passion for tending to our garden.
Show. No. Mercy.
We’ve explored a lot of ways that Expansion I will change Destiny. Weapons. Gear. Even Relic Iron. But what about the Crucible? 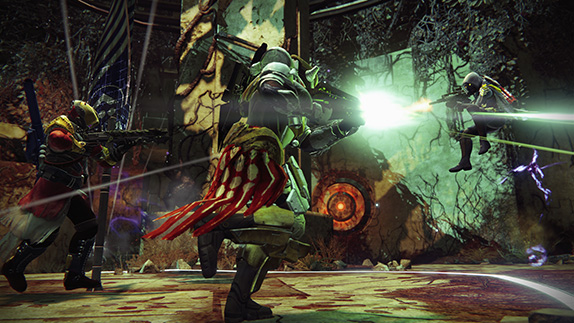 So glad you asked. We’ve saved that for last. Design Lead Lars Bakken has the answers. He says…

Destiny is an ever changing and growing game. We're excited that you're along for the ride. Here's a look ahead at the Crucible through the end of the year.
Slaughter Rules
Public Playlists
Premium Playlists
Iron Banner!

You read that right. The Iron Lords shall return. They will welcome all challengers. Lars also promises me that he’ll detail the experiments happening in the PvP labs before the beakers start to bubble over.
Crota's End-game
[graphic withheld for maximum mystery]
On your marks. Another Raid is about to become available. Get set. Both PrimeGuard and Invigorate are preparing to defend their world first titles – with many other gunslingers waiting in the wings. In order to Go, you’ll need the following:
The race begins on December 9th at 1AM Pacific Time. You will not need to complete the other Missions, Quests, Bounties, or Strikes first. The Raid will beckon at Zero Hour.
Good luck. We’ll be staying up late to watch.
Kicking the Hornets' Nest

Been getting stung by error codes? The Destiny Operations Team has the smoke bombs we need to pacify the little devils that get in between you and your fun. Here’s that the beekeepers have been up to these past few days.

During the most recent Destiny Update, players noticed an increase in WASP errors. Power-cycling your router and maintaining a secure, wired connection are the best remedies. We know that this won’t always resolve the issue, and our team is actively investigating a solution. We’ll keep players up to date on our WASP page.
Players have reported the inability to gain weekly rewards. We are aware of this issue and are investigating the cause. Please keep us informed by posting on the #Help forum.
We've seen numerous reports from players who are unable to receive their Tumbler Sparrow. The storefront description for The Dark Below is incorrectly labeled, indicating that the Tumbler is available immediately after purchase. This is incorrect, as this offer becomes available starting December 9th. This issue has been forwarded to the proper parties. Sorry for the confusion. If you have purchased any other edition of Destiny that comes with the Expansion Pass and cannot access your Sparrow, we have an article that can help you redeem your item.
Lastly, we added a fix that resulted in a 70% decrease in BEE/FLY/LION errors. If you’re still seeing BEE we have one other major update on the BEE/FLY/LION family in the works.

Their workload is like a safari, only there isn’t a soul on the planet that wants us to spare our prey. We’ll hunt them down where they live and mount them to our wall. Even the fruits and vegetables.
This concludes the final Weekly Update of the first age of Destiny.
Soon, some of you will soon face what lurks in The Dark Below. If you’re not accepting Eris’s call to war against the Hive and their dark God, you’re still welcome to browse the new wares in the Tower. If you’ve been struggling to reach Level 30, a whole new path is about to become illuminated by green flames.
Between now and then, we’ll be in Vegas. There’s a coming-out party planned for Crota, and some special guests are invited. Let’s hope the random numbers are kind to us.
See you next week, in the Tower or beyond in places unknown.