Nov 20, 2014 - DeeJ
This week at Bungie, we made some special deliveries.
Your console may have received over 2 gigs of data to pave some new roads that lead to our first expansion. If you’re holding a pass for the on ramp, your friendly neighborhood Postmaster may have received a shiny new vehicle with your name on it. The Tower most definitely received a guest in the form of Lord Saladin. Some of your favorite Crucible maps received some new cover to shield you from hostile gunfire. Even the nice lady that camps the puddle-strewn depths of Tower North received some new shaders and emblems.
We hope some of that booty made it your way. As the bits start to settle, let’s track all parcels that went outbound from us to you. If you got what you ordered, go play Destiny. For the “may haves,” there is always Help. If you crave extra details or have questions, scroll past the line.
How We Roll
Right around the time the Iron Banner caught fire again, the hottest new model in the Sparrow fleet made a surprise appearance in the wild. We gave you a day to trick it out on your own. Then we showed you how we roll. Please join us as we pop the hood and see what makes this baby tick. 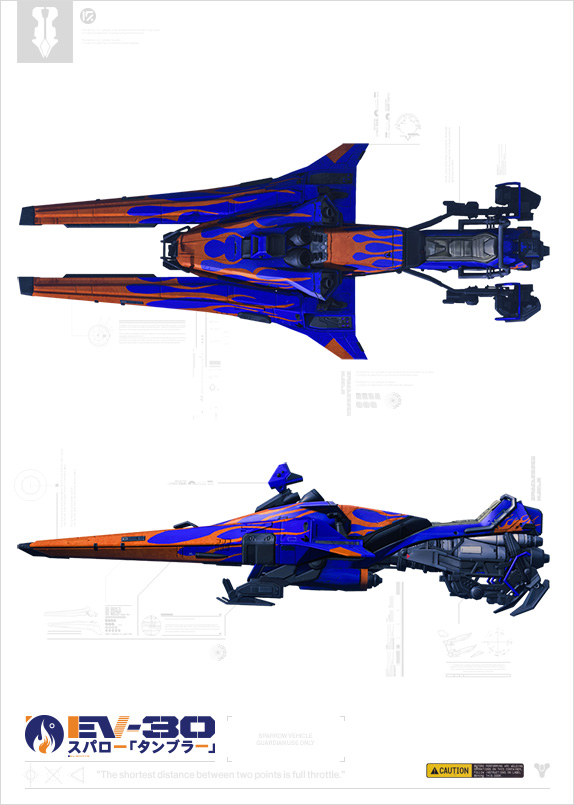 The chief mechanic who modded your sweet new ride is Bill Gross. This game designer did the heavy lifting in the garage. You can thank him (and our crew, it must be said) for every vehicle in the Destiny motor pool. Both domestic and imports. The rowdy steed that became the Tumbler was his pet.
You provided the inspiration. “Players’ desire for self-expression was the driving force behind the creation of the Sparrow,” Bill says. “I’ve watched dozens of community Sparrow trick videos and was blown away by the creativity. I wanted to unlock that trick potential for all players.”
This was a post-launch sprint to inject some fresh fun into the world of Destiny. “Early in October, the Tumbler was born,” recalls Bill. “I wasn’t sure if we would be able to release it, so I sent a demo video to the entire studio. Two days later, people were at my desk asking if I could finish it.”
“No problem,” was the answer. From there, Bill assembled a crack team to create a unique paint job and some daredevil character animations. The results will be available to anyone who decides to accept the next set of challenges we’re about to unleash. Some of you are already tumbling across the frontier.
Now it’s your turn to show us what tricks are up your sleeves.
Scruffy Looking Nerf Curvers
When Iron Banner first beckoned you with an invitation to battle the most dangerous creatures in the game, we made a dare:
Power Does Matter.
With the return of Iron Banner, we can again ask the question:
Does Power Matter?
Online chatter seems to indicate that it does. Level 30 Guardians are shrugging off punches thrown by Level 20 challengers who forgot to eat their shards. This visualization of the new threat-matrix comes courtesy of Competitive Designer Derek Carroll.
He lovingly referred to it as the "Nerf Curve." 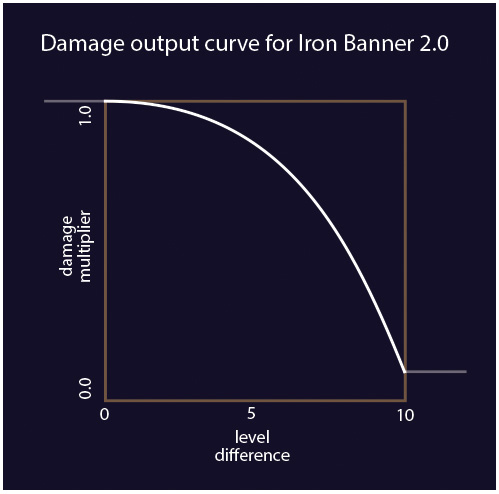 Perhaps you can figure it out. I couldn’t, but I know there are combatants in our community more skilled and more intelligent than me. I just keep shooting until the bad guys die – or I do.
Nevertheless, I promised I would share this during our Bungie Bounty Developer Commentary Edition. Please consider my debt of information paid. Please discuss amongst yourselves.
Exotic Chaos Theory
Update 1.0.3 was our biggest yet. We hit every major system that makes Destiny work with new content or bug killing agents. The best I can understand it as a player is that lots of math gets added to even more existing math. That sounds like a nightmare to these gunfire deafened ears.
When that many numbers collide on the super-highway, some of ‘em get lost – or just plain old smashed. This week, something happened to weaken Thorn’s capacity to inflict Damage Over Time with its Mark of the Devourer perk. That poisoned barb that lodges in your armor and pecks away at you is now two points weaker (seen below, measured with a 3, down from 5). Oops! 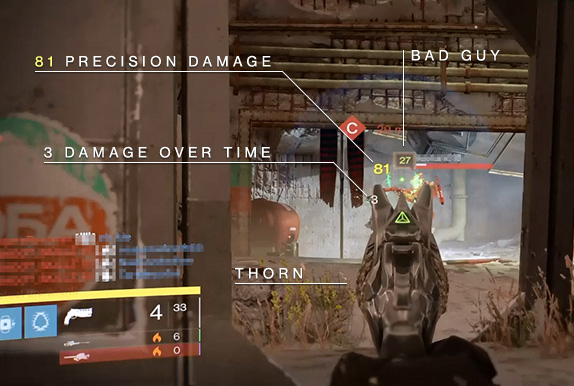 These photo-finishes were captured by Sandbox Designers Jon Weisnewski and Josh Hamrick. Think of them as our gunsmiths. When reports (and panic) broke out that Bungie had Ninja-nerfed your fancy irons, they took to the arcade for a photo-finish on store-bought boxes. When reached for comment, Hamrick made this promise:
"Soon, Thorn will be restored to its former glory... And then some." 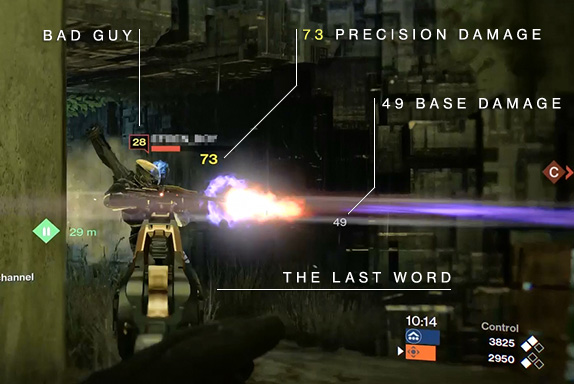 Their investigation also revealed that rumors of other weapon nerfs had been greatly exaggerated. Above, we see a freshly “earned” Last Word, standing its ground within expected parameters. When reached for comment by myself, I said “You still have to aim that thing.”
We engage in math homework not to argue with you, but because we know you care. And we love that. Thanks for thinking that your favorite piece is worth protecting. If your favorite exotic is in need of aid and succor, help is on the way.
We’re about to give you more reasons to covet almost all of the Exotics in the Grimoire deck. With the last update behind us, we can start to telegraph the next. Exotics are about to come off the workbench. We’ll be shuffling the cards before The Dark Below launches. Just in time for fresh targets. We know you’ve been waiting and asking while we’ve been working. 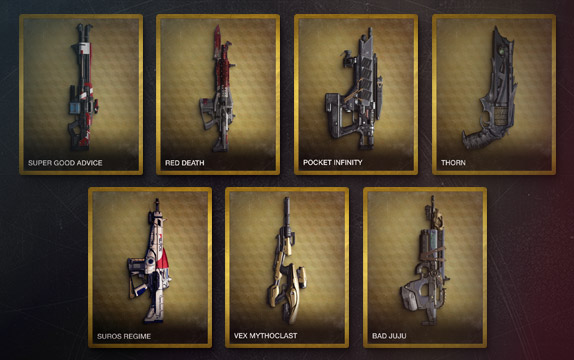 The economy of war in the City is being updated along with the rarest and most unique guns on your rack. Even the marks you’ve earned will have new buyers who hold what your arsenal craves. I’m saving the numbers for the notes that are being written up right now.
I’ve endured too much math for one week. We all have.
The Strikes Strike Back
Somewhere between the mission you can finish solo and the Raid that requires a cooperative mind-meld between six willing Guardians is a Strike. Strikes are a three-player cooperative activity in Destiny. We designed encounters that would demand the safety you find in numbers. That’s been the pitch since Designer James Tsai made it at (internal) Bungie Day 2012.
Since launch, we’ve noticed that, for some players, a partner was the last thing you wanted on a Strike. People were kicking their friends out of parties for better chances of surviving. This is what Jimmy had to say about our approach to Strikes over the long-term, and from the beginning:

We were looking over the data from Strikes and found that some unintentional damage scaling was occurring based on team size. The larger the Fireteam, the more damage an enemy shot would inflict upon its members.
We made a couple of changes. First, we tuned the damage to be a little easier overall so that we’d see higher survival rates in 3-player fireteams. Then, we normalized these damage values across all group sizes so that players wouldn’t feel that additional Guardians joining their Strike made things harder. Players can now be certain that people joining their team are helping their progress, not hindering it.
The side effect of this change is that playing Strikes solo has indeed become a little harder.  We acknowledge that this is undesirable for many players and we are considering different ways to solve these problems.

We’ll continue to have conversations about how to support the solo player over the longer term. Right now, our attention is focused on the feedback you’ve given us about the Raid.
Search and Rescue. Search and Destroy.

The Destiny Operations Center is a force for good. Sometimes, that good comes in the form of helping those in need. But good must also oppose evil. This was their hit-list as we updated Destiny, followed by their recap of the stabilizing aftermath.

On Tuesday, players were hitting NEWT and VULTURE errors, preventing them from signing into Destiny. Players were able to log in later that same day and Bungie will continue to monitor NEWT and VULTURE as the hit rates decline.
On Wednesday, a short maintenance period saw players unable to view in-game stats on their Companion App and Bungie.net profile. During future maintenance periods, we expect in-game stats may not update or may appear stale and outdated. Your data is not lost and stats will update once maintenance is complete.
Currently, we are investigating some players experiencing low frame-rates while using Xbox One party chat. Players have reported a potential workaround you can try as we continue to investigate a fix for this issue. In some cases, refraining from using the Xbox One Party Chat app seems to resolve this issue. We apologize for any inconvenience.
Some of you may have noticed a little gift from the Postmaster. The EV-30 TUMBLER is a brand new Sparrow currently available to players if they have purchased one of the following Destiny products:

If you have one of the above-mentioned products, but cannot find your Sparrow, we have a FAQ available. Please check the article for additional information on how to receive this sick-nasty Sparrow.
Lastly, if you were recently banned from Destiny for exploiting a known glitch that provided you with Heavy ammunition that was not earned in battle, as of the latest patch that exploit no longer exists.  We have begun lifting bans and giving players another chance to compete in the Crucible. That said, the Banhammer is always watching. Should you stray from the path of fair play, judgment will be swift.

Take special notice of that last part! The team that can see you when you’re encountering errors in orbit also knows when you’re a cheat. They don’t even need to see it. Righteous science is hard at work to keep our streets clean of unauthorized ammunition.
Be excellent to each other.
Next week is a time of feasting and celebration in our corner of the world. We’ll still take a moment to give thanks for the community that plays Destiny and keeps us honest.
Talk to you then, and every day until then.