There is one question you’ve all been asking since the Destiny Beta went offline. We’ve heard you. It’s time to issue an official response. Before we get down to business, indulge me as I cast my own loving look back. There’s something I have to say to my dashing defender of the last safe city on Earth.

Hey, handsome. Miss you. We had a lot of fun together, didn’t we?
You were bold. Even in the darkest corners of Old Russia, your eyes burned with the same purple intensity that sent so many of your enemies into the Void.
You stood fast in the face of danger. Hive Ogres shook the ground beneath your feet.  The Lord of the Iron Banner put your skills to the test. Yet, after every mission, you returned triumphantly to the Tower.  Humanity had nothing to fear – not on your watch.
You were brave.
And now, you are gone.
You and millions of Guardians just like you. You helped us build a better world – all of you. But as great as that place has become, it’s a place that wouldn’t make sense to you anymore. Too much has changed.
I’ll remember you, and millions of Guardians like you, for the things you taught us. Thank you for letting us learn from your adventures. We promise your sacrifice will not be in vain.
See you starside. 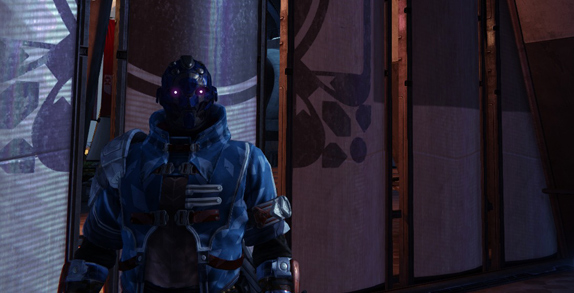 If the rest of you haven’t gathered the painful truth from the eulogy yet, our Beta characters won’t transfer to the final version of Destiny. The vaults have been cleaned out, too.
Step away from this update and take a walk. Have a good cry, or howl at the Moon. We’ll be here when you’re done…
Welcome back.
What you just experienced is something we’ve been through countless times here at Bungie. We feel your pain, and then some. Making a game requires iteration and progress. When we reinvent the world where the Guardians live, sometimes we have to leave them behind.
Tyson Green is a Bungie designer who thinks long and hard about character ownership. He’s said goodbye to hundreds of Guardians throughout the pursuit of Destiny, and dozens of those warriors had evolved well past Level 8. He’s not the reason why your character is gone, but Tyson can explain why our Guardians won’t accompany us on launch day:

Since the Beta, we’ve continued to tune and adjust the game. The way you earn experience has been adjusted up and down a bunch of times. Items have been added and removed. New features toggled. Although there’s no single monumental change, the sum of the tweaks leaves characters from the Beta Build in strange shape that would be confusing at best, broken at worst.

We’ve been asked many times if this was a real Beta. It was. We learned a lot from your participation, and we’re going to tweak, adjust, and in some cases, make some significant alterations that ultimately mean your Beta Guardian can’t go home again.
This is the last time we’ll ask you to part with your hero. On September 9th, you can create a Guardian who will keep you company for a good, long time. On a long-enough timeline, you might decide to delete him or her and start over again – but that will be your call to make.
There are other worlds than these…
If you’re still smarting about the loss of your Beta Guardian, we’re here for you. Everyone in the studio is here for you, in fact. This week, for perhaps the final time, we “wiped” all the brave heroes that lived in the full build of Destiny. The usual funeral pyre of final screenshots was gathered and set alight.
Matt Bennier is a Senior Artist at Bungie. His exotic protector of humanity struck a final pose in our inbox that began the parade of commemoration and remembrance. Anyone out there still think that Warlocks aren’t frabjous enough? 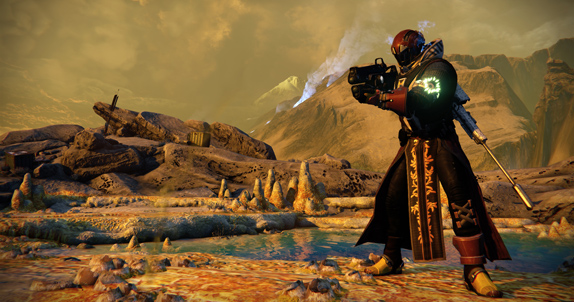 Grab your Destiny Companion. Look at your Guardian. Now look at Matt’s. Now back to your Guardian. Now back to his. Despite your brave service and fantastic exploits in the Beta, it was only your first step into the wider world of Destiny. A small (yet record breaking) percentage of you barely even ventured to the Moon. There is so much left to do – so much left to earn and master.
Right now, you’re lamenting the loss of your starter gear, those pearls of mayhem of destruction that you carved from the wastes of Old Russia. Look beyond that horizon. We have exotic arms and armaments secreted away – adventures you can barely imagine right now.
In time.
Set Destination.
That’s right. We’re leaving town again. This time, we’re even leaving the country. Again. There are still some stops to make on the world tour that leads up to the launch of Destiny. There are still some people out there who have no idea that they can wield the incredible powers of the Traveler as a weapon. Our quest is to find them and bring them into the light.

Next stop: Germany.
We’ll be at gamescom in Koln (a place we know as “Cologne” for some reason). Whatever you call it, it’s the setting for the largest consumer show in the world. There is no setting that enables more people to come into contact with the people who make their favorite products. Lucky for all of us, games are the focus. Destiny will be on display. If you can find our booth, you can play it. If you’re nowhere near Germany, we’ll have some sweet media loaded into our cannons that will reach you wherever life finds you. As always, people who pay attention right here rarely miss a beat.
This is not the last stop.
With the most pressing revelations out of the way, we’re left with less to talk about. Most of the questions that were asked during the postal drill have been answered by everything you see above. To prove that we still love you and want you to be happy, let’s open the Sack.

Jester GS  What is the best thing about Destiny?
The crucial ingredient that you add.
Admiral Apricot  Weren't the Exploration activities called Patrols once? What happened to that name?
Names change. Sometimes they change on a whim. Sometimes they change as a result of impassioned feedback and careful soul-searching. Sometimes they even change back. We’re willing to wager that your name wasn’t always Admiral Apricot – and that it isn’t always that all the time.
PhNx Hellfire  Do any of you Bungie employees have any secrets left you will tell us before launch?
Watch what happens at gamescom. We’ll be interrogated all week. It’s a good chance that we’ll crack under questioning and tell you something that you want to know.
Br0z345  Why are there birds on the Moon?
You’re taking the slang term for “satellite” waaay too literally. Those birds did not come from the Moon.
The Dragon  If I said IDDQD would you know what I was talking about?
If we had no idea, would our credibility with you be doomed?
There’s nothing left to do but approach airport security and politely show our papers. We’re doing what all smart people do when they make lots and lots of people really mad: We’re leaving the country!
Talk to you on the other side.