Jun 20, 2014 - DeeJ
Celebration is very atypical at our studio. Successful milestones fly by without the pomp and circumstance you might expect out of a group of ultra-passionate game creators with an unlimited supply of Red Bull. More often than not, our collective enthusiasm is tempered by a fiery criticism that would make even the most e-battle hardened YouTube commenters wince away from the screen, eyes watering.
But this week at Bungie, we danced… and so did some of you.
Putting our Alpha out there lit a new kind of fire here at Bungie. It feels like we’ve been reborn. Putting alpha code out in the wild is always a risk; that build is ancient by our standards, riddled with content and bugs we’d never allow through to ship. In many cases, the really rough and jagged edges had been hammered smooth long ago, making it all the more difficult to see them discovered, but in just as many others, there’s still work to do, and the only way to get it done is to let you touch down in our world to tear the place wide open.

Here’s the Post Game Carnage Report a small, intimate group of players were able to rack up in the First Look Alpha in just a few days’ time:
• 149,522,313 Primary Weapon Kills
• 21,782,610 Secondary Weapon Kills
• 4,002,737 Heavy Weapon Kills
• 21,687,298 Super Ability Kills
• 2,819,211 Orbs of Light Gathered
• 6,850,773 Control Points Captured in the Crucible
• 1,195 Deathless Medals awarded in the Crucible
• 4,356 Splatters with the Sparrow
• 667,966 Public Events Joined
• 60,491,944 Fallen Dregs Dispatched with Extreme Prejudice
• Too many to count: Guardians served in Dance Parties
6,461,871 Player Games Played!
If you had a chance to play our First Look Alpha, thank you for paving the way for what we hope is so many more players. There are a lot of gamers who didn’t get the chance to fight in this round. That’s going to change very soon. If you did play, you’ve helped ensure that everyone who jumps into our Beta in July will have a better experience for it.
A lot of our friends asked us if this was a real Alpha. It was. We’ve gathered a mountain of data and feedback. We’re learning and reacting and Destiny is going to be better because of it. You’ll see the fruits of that labor as early as next month, assuming we’re lucky enough to have you in our Public Beta.
Hope to see you there.
That T-Shirt Came From the Bungie Store!
So, Alpha is behind us. Done and dusted. The icon sits idly in our home screen, taunting us every time we fire up our consoles to play or watch something that isn’t Destiny.
Something is missing – a commemoration of the brief, but beautiful time we spent together.
Behold! 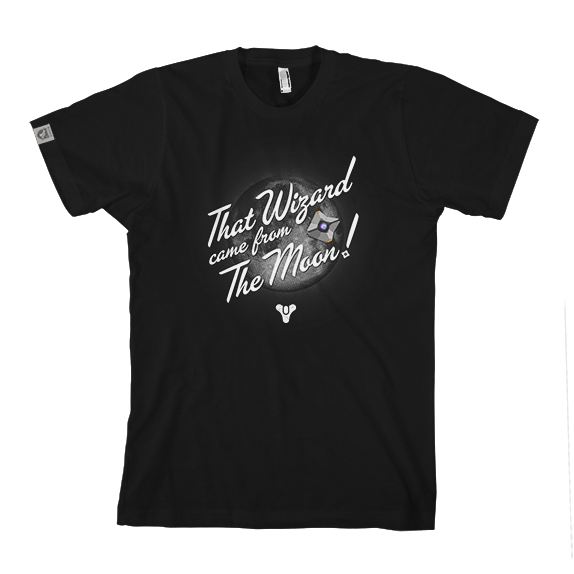 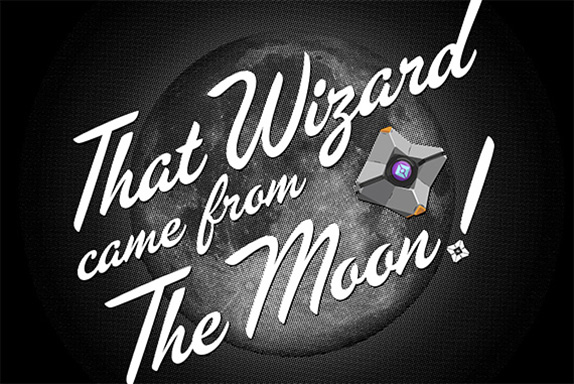 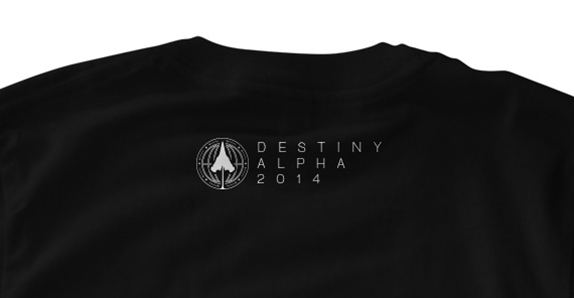 Commemorative Destiny Alpha T-Shirt
Immortalize your first experience in Destiny with this totally wizard t-shirt! You played. You danced. You helped make the entire Destiny experience better for every last one of us.
Profits from the sale of this item will be donated to charity through the Bungie Foundation. Like the Alpha it celebrates, this is a limited edition run. See the Bungie Store for details.
Thanks for playing!
Those selfies came from the Alpha!
As the Alpha was being played, we implored you to share your favorite moments. A call to action on Twitter produced an epic parade worthy of heroes. Of the hundreds that were shared, we grabbed twenty five of them, and submitted them for judgment on Facebook.
Perhaps #bungiefaves was the wrong hashtag. These screenshots were taken by you, and judged by you. These are community faves. Check your direct messages on Twitter if your work is on display below. We will find you. And, we will gift you with sweet loot from the Bungie Store. Here are the top ten. 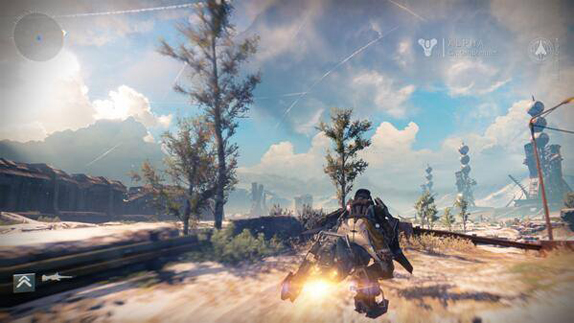 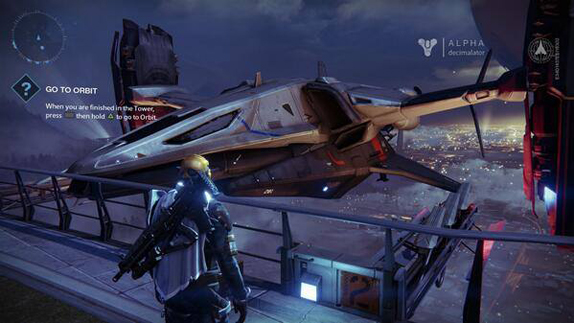 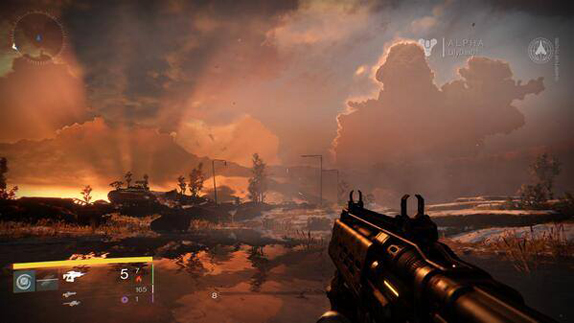 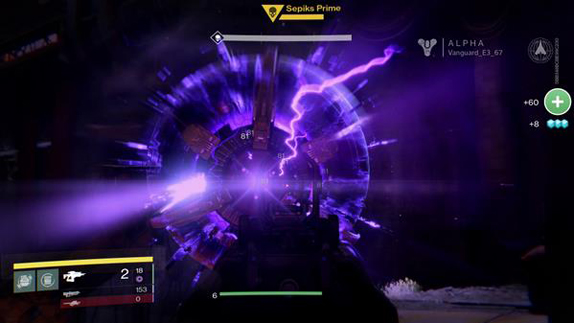 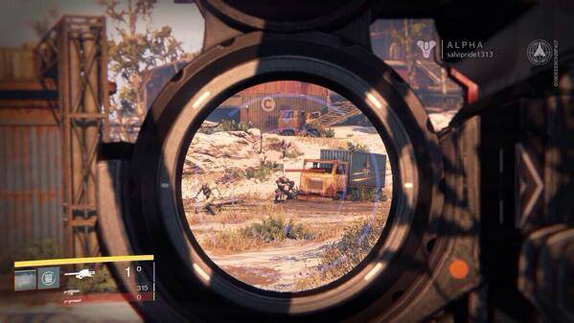 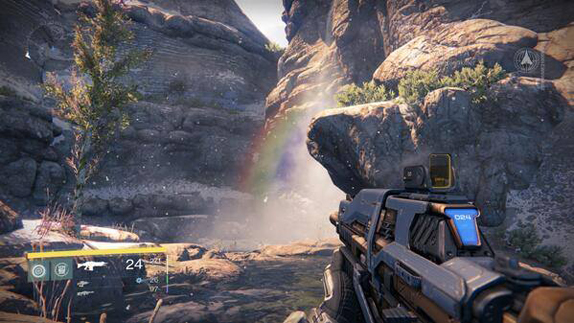 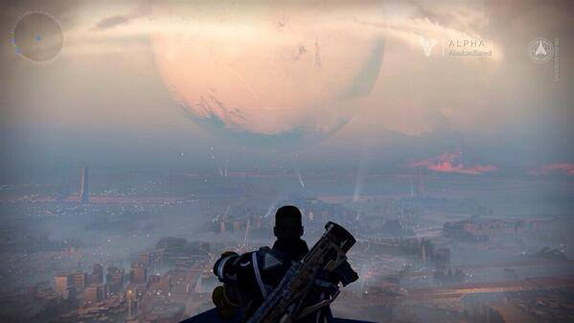 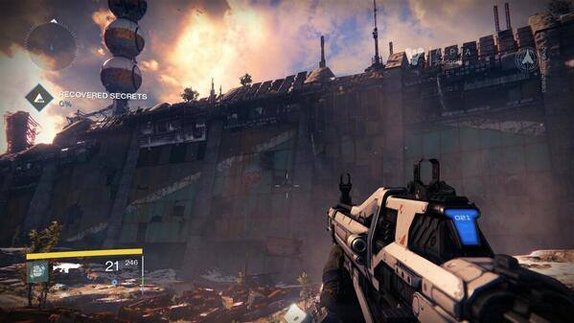 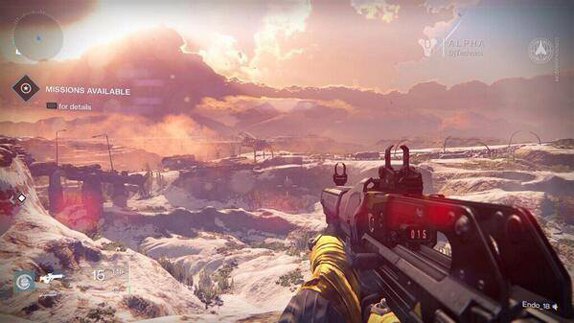 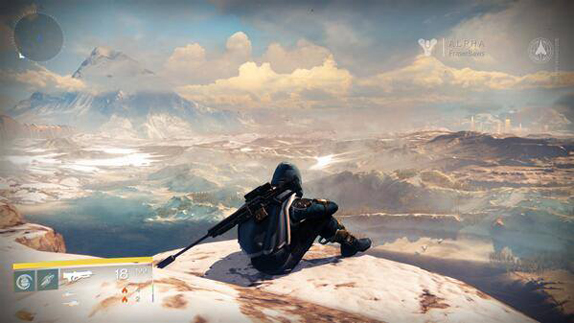 This one just missed the cut, but I dig it the most so we’ll include it as an honorable. My favorite moments in the Alpha were just me and my sparrow, lost in the wild and looking for trouble. 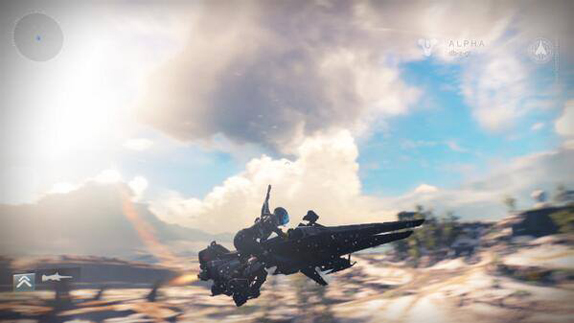 If you’re missing the world of Destiny, enjoy the endless scroll of moments that have been forever preserved behind the #bungiefaves hashtag on Twitter. And, start thinking about how you’ll frame your Beta adventures. We’ll do this again real soon.
That Mail came from the Sack!
Never be satisfied with what you’re given. Never settle for what you know. New experiences should always lead to new curiosities. Let’s open the Sack.

Hylebos  What were some of the things the team learned from the Alpha?
We collected volumes of data behind the curtain. We’ll use that to finely tune the network that brings Guardians into our brave new world and the experiences they share while there. It will take time to fully realize the impact of those learnings. You’ll see them on display in Beta and in the final version of Destiny.
In terms of the community overall, we learned that the best way to understand Destiny is to play it. If you played it, we think you’re learning that as well. If you shared your gameplay, it’s likely that you’ve grappled with questions from your audience. It was fun to learn a thing or two about how to tell this story from your own words.
What was it Ninja said? “Destiny feels like Destiny.”
Fridge Gnome  When will you pay my child support?
When you teach that brat to sing.
ThornHide  How much of a difference will there be between the Alpha and the Beta?
For starters, we’ll play with a lot more people on a lot more boxes. The community will have an equal share of voice. We’re looking forward to that. Imagine how many more people will be uploading war stories. It will be interesting to see who is left to watch them.
As far as nitty gritty details, you’ll have to stay tuned.
bigphil  Are you excited by what you have seen from the communities reaction to the Alpha?
It’s been fascinating and humbling and inspiring and often hilarious. We’re off to a wonderful start. The true beginning is yet to come.
The Alpha community is a lot like the Destiny Alpha itself. In current form, it is incomplete – a very small slice of its full potential. We’re ready for Beta. It’s very close to the time when there will be no walls between Destiny and anyone who really wants to play it.
EJ94  Will the supers be able to cancel each other out and create an awesome shock wave that blasts everyone back? Like if one guardian uses the Nova Bomb and the other one uses the Fist of Havoc and they launch them simultaneously?
Supers can and do cancel each other out. Personal favorite Alpha moment:
I rounded the outer flank of a lunar base on my Sparrow. A bogey was capping Zone B, and no one from my team was there to talk him out of it. He was ready for me as I arrived on a plume of light. Rather than just let him shoot me through the helmet, I vaulted from the driver’s seat. As my heels hit the moon dirt, I sprang into a glide. Divine light gathered into the palm of my hand as I orbited my opponent’s cover like a war satellite. His own hand hoisted a revolver that erupted in flame. As my bomb arced lazily toward his feet, he shot through me with a mote of gold. We both became clouds of embers that drifted away into space. Zone held.
Corneilius86  I am intrigued about clans in this game. What is their REAL purpose? Surely it is not JUST a gathering of friends under one banner.
Read that last sentence again: “A gathering of friends under one banner.” Now, picture the banner. Now, imagine you can hear its ceremonial horns.
If you were able to complete that guided meditation, you know what purpose clans will serve in Destiny. Playing this game is more fun when you play it with your friends. That’s such a warm and fuzzy business offering. Ain’t it? We’ve been dropping that pleasantry for years now.
Behind those buzz words lurked amazing moments of action that we haven’t been talking about yet. Every time I gladly hit the points, I had to stifle mental images of armored knights with pure energy crackling in their hands.
I am intrigued by clans in this game, too. I hope you make a lot of them.
WILLtheKILLA5  Just how many people went through the crucible at E3?
That’s not the question you should be asking. What happened to the people who were meant to be there? You can ride a line for hours, only to walk away wondering what the hell that was all about. Then, there are these dudes. 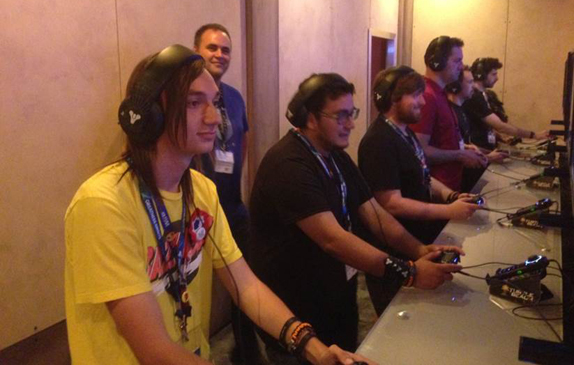 They ran our drill three separate times – that’s one for each Guardian class for each of them. Every time they entered the arena, it was Senior Artist David Helsby who would lead their Fireteam. He mentored them as weapons of light. They guided him right back with notes on the combat. Their analysis on the soundbox is between them and their leader. These were their parting words:

“I thought the game flowed really smoothly in terms of the controls and gameplay. We had to come back for more. On the second day, when Scott Taylor said he was glad we came back and was hoping to see us again made us really happy. On our third day, not only were we greeted with a warm welcome, but given a name. For our last round, we got to play with the developers. Possibly one of the greatest experiences we've ever had. We love the game, love the team, and love the gift we received.”
--Sir Isaac Wolf, Speaker for the Helsby Three 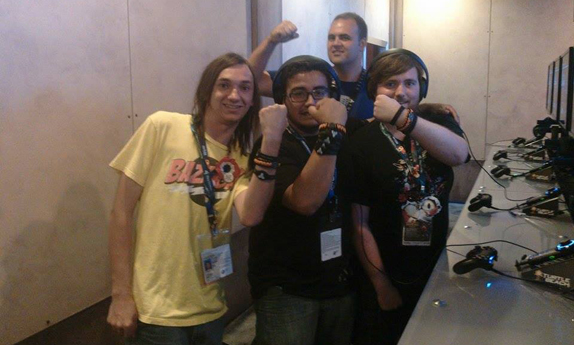 Don’t mention it fellas. The pleasure was all ours. Let’s hope your next seven hours of Destiny are more action packed than your first.
And Im Here Too  How many Guardians does it take to screw in a light bulb?
None. Guardians are never without a light in the Darkness.
TheRedHunter  What the heck is going down on Bungie Day? Any hints?
I guess that’s the next thing we’re kicking to if you didn’t get your question (or one a lot like it) answered this week.
So many more adventures are on the way. It’s gonna be a great summer. If September feels like a long way away, stay tuned. We have some exciting moments planned to help pass the time.