Mar 21, 2014 - DeeJ
This week at Bungie, we were honored to host a very special guest.
It’s always nice to take the long way when you need to get to the other side of the studio. This place is wonderful for wandering. Every screen is another window into a fascinating world. Even the shortest distance between two points might offer a glimpse at something brand new, unexpected, and amazing.
Yesterday, Parsons caught me window shopping, and pointed me in the right direction with a helpful emote. “Go that way. Walk twelve feet in front of you,” he said. “What you’ll see on Cameron’s screen is so awesome.”
He meant Cameron Pinard. When he’s not supporting a great charity as one of our Men in Kilts (the one in the middle), he’s a seasoned artist here at Bungie, with a flowing mane of essentially oiled hair. I padded up to his desk and caught him conjuring the vivid evidence of one of the Tower’s many important guests.
Imagine an interstellar motorcade for a visiting dignitary…from space. We talk a lot about a “living, social world” in Destiny. We drop hints about new things to do and a landscape of action and adventure that changes and evolves over time. At this moment in the development march, we’re really starting see how we’ll deliver on those promises.
Imagine a world in which very specific moments of action become available to you when you least expect them. Unique missions, with unique rewards, will present themselves. Emissaries appear for a short period of time. Then, they’re gone, like the spirit of a Fallen Captain, carried away by the wind.
If you’ve impressed them, perhaps you’ll have earned a memento. “Where did you get that?!” people will say, provoking you to recount your tales of bravery.
These limited engagements are just one of the things we’re doing to bring the world of Destiny to life. Just when you think you know everything about the worlds you’re fighting to reclaim, we hope Destiny will continue to surprise you as you wander, even when you’re carving a bright line between two points, off on your own adventures. These surprises will bring with them fresh opportunities to venture into the wild with your favorite weapon slung across your back, the promise of fresh loot to make you even more badass.
We won’t tell you exactly when or how all of these moments will arrive. Maybe a friend will point you in the right direction. Maybe you’ll be the one leading your friends to glory.
Time will tell.
We share because we care.
It’s been a while since we gave you fresh loot for your desktop. Our game is under some tight wraps right now. You probably noticed.
We know you’re waiting to see more. Your emotional state could be described as “anxious.” This is altogether good. We love you for that. Rest assured that we’re not content to sit in silence. We’re loading our cannons. Soon, we’ll light the fuse, and the real fun will begin.
In the meantime, I was able to carve a screenshot from Sony’s recent television spot. Sharing, after all, is caring. That’s how sharing works.
See what I did there? 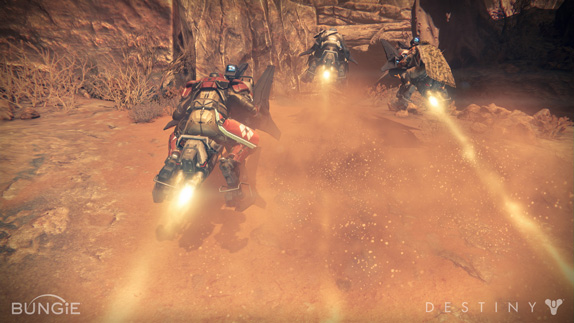 Let your imagination run wilder than this pack of wolves patrolling the wild. Someday soon, you’ll rocket across the landscape we’ve wrought with a Fireteam of your own. In the meantime, we’re making sure you’ll have a lot of ground to cover.
Ever since we started talking about Destiny, we’ve covered a lot of ground together. It’s getting harder to leave some things to your own discovery. That doesn’t mean that we won’t open the Sack.

Hatima  Are we there yet?
We are not there, dear Hatima. If you’ve come this far, perhaps you can come a little further.
Jailbot  Will the Septagon be making a return in Destiny as a way to distinguish other Bungie players from the masses?
Perhaps. Perhaps not. It’s one of those decisions we’ll save until the very end of our journey. Maybe we don’t want to be distinguished from other players. It could very well be that we’ll want to move among you – just one more Guardian with a mission unfolding before them.
Or perhaps you’re talking about the Bungie Community. While we’re not talking about the myriad ways you’ll be able to distinguish yourself as a loyal and active member of our community, we are absolutely committed to giving you ways to show all the other suckers out there just how much Bungie loves you. Baby.
Im SteelAssassn  Will there be any support specialization for Guardians like healing or damage buffs for allies?
Do we have a support player in our midst? You and I are birds of a feather, my good man.
While some Guardians are built to be more aggressive than others, it could be said that every player of Destiny can fill a support role. That’s the essence of teamwork, after all. Our designers have conceived some intriguing ways to reward you for fighting alongside your friends, instead of just nearby them. It may surprise you to learn that you’ve seen these mechanics in action, but we’ve yet to see anyone call attention to them.
That’s not Glimmer, David.
SpikeyDemon  Is there an element of a stealth system in the game?
If we told you that you could render yourself invisible and strike with a blade sheathed in the Traveler’s Light, would that be stealthy enough for you?
Nujeru  Will walkthroughs and guides ruin Destiny in any fashion? Would you advise Guardians to play through Destiny without them?
Interesting question, and a very personal one. We think that a huge part of playing Destiny is blazing your own trail. It’s an idea that’s baked right into the name of the game. It’s inevitable that people in the community will want to document their exploits – to show you how they achieved their own personal moments of glory. You may need them to light the way for you from time to time. That’s awesome, too. Guardians helping other Guardians… Hell yes.
whoknows  How will Testers be treated differently than the rest of the community.
Do you mean Beta Testers? I’ve seen a couple of special rewards that have been set aside for people who play this game before it launches, officially. If you’re brave enough to be among the first to fight, the world will know about it.
Should you make it into the Laboratorium as a guest of Bungie User Research, I hear they give you a t-shirt. That’s the rumor, at least.
If you’re asking about the testers in the studio proper, we keep them well fed and hope like hell we don’t run into them during our lunch playtests. They are foul and nasty creatures who feed on the tears of their frustrated prey. They are the backbone of our game, making sure we stand strong at ship, chest out, proud of what we’ve put out there for you to play.
Spawn  What happens when your entire Fireteam dies?
The darkness consumes you.
RogueTeamplayer  Will we get weekly updates during and after the beta?
Of course we will, and they will be glorious. They’ll be written about a community that is actually playing a game, rather than waiting for it. We’ll tell stories about you, and chronicle your march toward becoming legends. We’ll talk about the ways in which you surprise us. We’ll celebrate the things you do that exceed our expectations. We’ll host the party.
BarkchipOfDoom  Have you guys got big plans for E3 this year?
I just came from a conference room where we were trying to decide if we should go to E3 this year. What do you think? Should we do it?
Jutin  I love how I always come up with a dying question at the end of a weekly update, but when the mail sack comes, I always seem to forget what it is...
Here’s your chance. Write it down!
There should be no reason for your question to die. We’re here every week, even on weeks when our adventures send us far from home. Next week will be a lot like this one. We’ll play this game of questions and answers – this dangerous flirtation with truths and spoilers - until we have another game to play together.