Mar 7, 2014 - DeeJ
This week at Bungie, we ventured forth from our Tower on another dangerous mission.
Our objective was the same as it always is: World Domination.
There are people on this planet who have yet to receive our brave invitation to adventure. Unlike you, the elite community that’s mined and dissected every detail we’ve let slip from our grasp, they know not their destiny. Thus, we’ll plot and scheme behind closed doors in secret meetings with powerful allies, to catch them up to you.
The last time Urk and I had an excellent adventure like this, we told humbling tales of customs agents who had seemingly been waiting for us. This time, our travels lacked those warm, familiar moments. These past few days, clearing exotic ports has been more of an ordeal. Our strange cargo has been to blame. 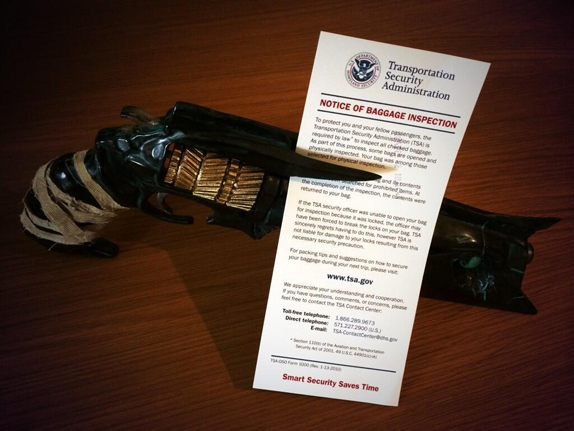 To capture the imaginations of our friends, we bring a little piece of our world to share with them. You would call it Thorn. We’ve learned to call it a security nightmare. In retrospect, we should have left the exotic hand-cannon at home, but it always gets a laugh when we pull it on a crowd. We can’t resist that.
Our trials began before our voyage. The first hurdle appeared in out path at SEATAC (that’s Seattle Tacoma International Airport, to the faithful). The nice lady who was checking baggage bound for London started asking tricky questions.
“What’s in this case?” she said. 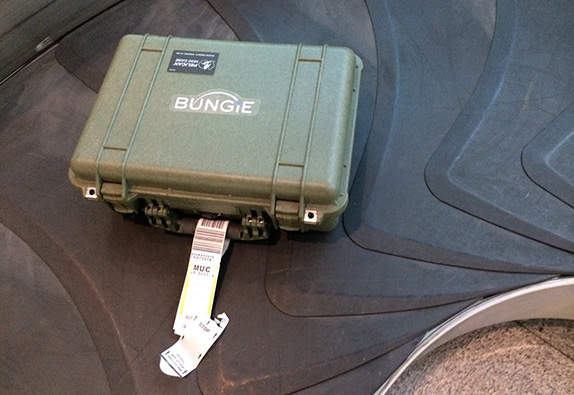 “Uhhhmmm…” I searched my brain for the most harmless label I could find for the insectoid replica that lurked behind the latches. “It’s a costume prop.”
“Show me,” she insisted.
“Here we go…” I thought.
When we cracked open the case, she gasped. Withdrawing in horror, she wouldn’t even touch it. Instead, she reached for the phone and immediately called her supervisor.
“It’s a weapon,” she kept saying.
“It’s not a weapon,” I kept saying.
I all but begged for her understanding while she incriminated us in the worst of crimes. “It’s a science fiction prop,” I would plead. “It’s a harmless piece of plastic.” None of my easy words diffused her suspicion.
“You’ll need a Limited Release for that,” offered up the agent at the next counter. “Treat it like a sporting weapon.”
“What sport would you expect us to play with that?” I asked, the loss of my patience starting to boil at the back of my throat. And I used to be such a nice guy.
After a visit from the supervising officer, who also wouldn’t touch the hideous aberration, we were granted our Limited Release. This hilarious act of compliance included a visit to the special baggage counter. After an elaborate test for explosives, we were on our way. No, really.

The next leg of our journey took us from London to Paris. Even though a high-speed rail would be our vehicle, the check in process provoked equally terrified responses. This time, all I could do was laugh, and sneak a few photos onto my smartphone.
“Damn you, Sloan Hood,” I couldn’t help but think to myself. “Damn you and your skill with a 3D Printer and a maker’s paintbrush.”
After a daring tap dance, accompanied by a long-winded explanation of what we do for a living, they let us on the train. As they say in jolly old England, all is well that ends well. We delighted more European audiences with a sneak preview of the adventures that lurk behind our curtain. We visited the most charming cafes in the region. 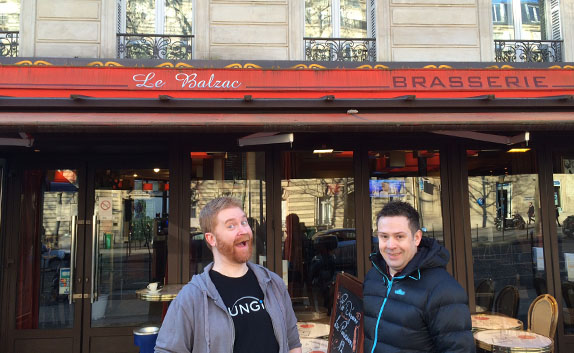 That’s Urk with Dan, our friend from Activision and our guide for this most recent expedition. He was the third member of our Fireteam, as well as the Guardian that got to wield the weapon that caused us so much trouble. It’s all worth it, mind you – the extra pat downs and the judgmental stares. We’ll do whatever it takes to unite humankind under the protective shadow of the Traveler.
In the months to come, we’ll stop beating those drums in secret. We promise. For now, the best we can do is to share a few moments of the journey with you. Whoever it was who said that the journey was the destination never committed a Cabal Centurion to the dunes of Mars with a Fusion Rifle. The payoff lurks at the end of this long road, friends.
Hang in there, and forgive us for our dirty little secrets. We’re planning to blow your mind with a full frontal assault on your frontal lobes. It’s scheduled for later on this year. Right now, we’re placing the pieces on the board. As I write these words, we’re on approach to Munich. Poor bastards have no idea what we’re packing in our luggage.
We’ll get back to telling you all about the Bungie team next week. We hear that they’ve fired up their countdown clocks. We also hear that they’re preparing some delicious assignments for each of us to lug home to our gamerooms. This thing is starting to feel very real.
We can’t wait to put you to the test as well.