Feb 28, 2014 - DeeJ
This week at Bungie, we entered a new phase of development.
The strife and conflict of the Pentathlon fades in our rear-view mirror. A fresh build of Destiny sits on every desk in the studio - a monument to a battle for the ages. Four dueling schools have laid down arms to reconstruct our union. Our team has been reunited.
As the smoke cleared from the air, Luke Smith stopped by my desk. When he stops by, I listen. In the golden age of Halo 3, he walked this very beat. Now, he’s a game designer with grand conspiracies to send you screaming into the darkness of Destiny’s endgame. Like a veteran of the force, as he did the other day, he imparts his wisdom on rookie cops like me.
“Can you feel it?” he asked. “This is my favorite part. These next eight weeks are where it all comes together.”
“Closing at Bungie is when we look at the game we have now, the people we have here, and the time left on the clock to make what our fans will call Destiny.”
This is when the best memories from game development are made, when late night conversations form unbreakable bonds of friendship and teamwork.
“The people here are about to be a part of something that is a once-in-a-career opportunity. We have to use what little time we have left.”
“I can’t wait to see how we’re going to land it.”
There was a rare glint in his eye.
This great time of reckoning will not be the end of our journey. If you’re thinking you’re two months from seeing this game on your shelf, I’m still here to ask you to put on the brakes. The next phase awaits, in which you’ll be invited to launch head-long into the world we’ve constructed, like a test pilot clad in exotic armor.
War Stories from the Pentathlon
It was not a day off. The Pentathlon was a trial. The combatants were mere pawns, marched out to fight and die so that we could know the truth about what we are creating. 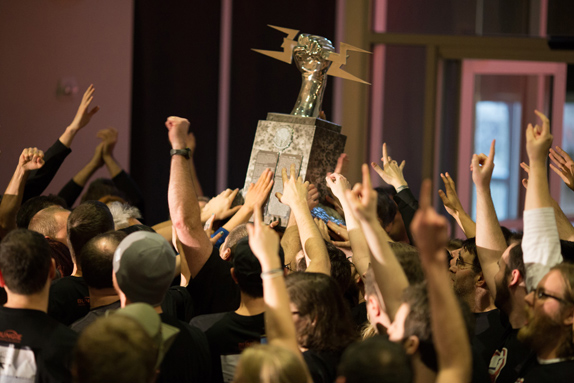 There were many victories produced on that day. For one of us, the events resulted in the most satisfying professional moment of his career, to date.

“Watching a 100-foot monitor, divided into six perspectives, where your coworkers are discovering their way through Destiny’s first Raid was incredible. For the reasons you think and the reasons you don’t.”
Luke Smith, Design Lead

For the designer, the Raid event was the realization of much blood, sweat, and a few tears. For the player, the tears were just beginning to flow.

There is darkness and uncertainty. For what feels like forever. We cannot see, and there are only seconds to spare. In the final moments before death, our leader brings us back into the light. Each move must be calculated, every shot accurate, our timing precise… or we may be lost forever.
Jake Lauer, Web Development Engineer

Meanwhile, a cooperative mission was being perverted to suit the cause of a race. Some would call this a speed run. We called it a test of combat efficiency.

Another humid day on Venus. The sulfur pools before me, my hands rest in my lap. The Judge begins the countdown: “3… 2… 1… GO!” Fireteams begin the race to be the fastest Strike team in the land. My Middle School compatriots and I race across the planet on our Shrikes. Our jumps are perfectly timed. The beautiful space magic of a Hunter, Warlock, and Titan working together in harmony destroys all that oppose us. I call out checkpoints to my team and hear mutters of disbelief from my competitors. Team Middle School has already won the first two heats; it is just up to my team to seal our victory. The crack of sniper shots echoes in my ears as we complete the mission. Cheers erupt in the room as multiple souls mutter “WTF?” Victory for Middle School, and it wasn’t even close.
Daniel Auchenpaugh, Investment Test Lead

In every Destiny arena, the Middle Schoolers were a dominant force. This does not mean that they were not forced to stumble once or twice. There was one Newbie who halted their march in spectacular fashion.

From the momentary champion:
Middle School versus Newbies in the finals. A cold silence falls upon the lab. It's a full on fight to the finish, neither team giving an inch. Screams ring out from the other lab - only seconds left now. The other team leads us by one kill. My teammates are dead. My Hand Cannon is fully loaded. Enemies surround me. Now or never. I turn the corner and begin my attack. The power of the weapon I'm holding has never been so clear. My aim is true, and down goes a fleeing enemy. Spirit is shot back into the room as I hear Hamrick's familiar voice scream "Ohhhh!!! Greg!!" Five seconds left. Another enemy in sight, undoubtedly on the hunt for my blood. This guy never misses. This time, neither do I. "Game Over." The room erupts. Newbies win.
Greg Requa, Tester

From an eye-witness account:
The whole room watched Greg flank the enemy team in the final few seconds. He wiped the whole team with a volley of perfectly placed hand cannon head shots to squeak out the win. The whole room was on their feet screaming. Greg dropped the controller and was walking around hollering like a madman.
Jon Weisnewski, Designer

From the next lab over:
Twelve seconds left. I scream out “WE’RE UP BY 200 PTS. EVERYONE F@#$%ING HIDE!” Nobody hides. Greg kills everyone. We lose. Commence rage.
John Harris, Tester

In the end, the Middle Schoolers would overcome every obstacle, including the gunslinger-blooded Newbie who mounted the most impressive counter-attack of the day. When presented with the trophy, so emotional was their Captain that he whipped off his jersey and spun it above his head like the wicked black mace of Sauron, as onlookers fled from his rage. As the triumphant Vine graced our wall, chatter about the Bungie Naked Man spread across the Internet. 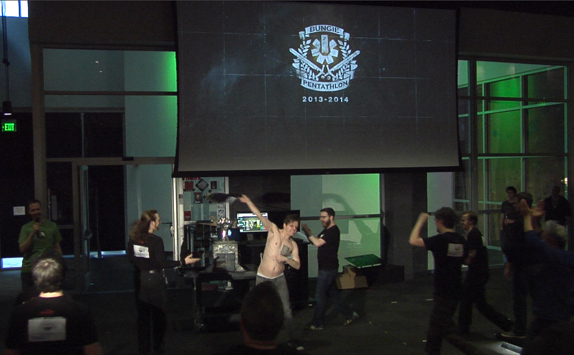 For the record: I was only half-naked. No promises for next year, though.
Elliott Gray, Graphic Designer.

There are some promises we can make at Bungie. While there are no guarantees that we’ll keep our pants on, you can anticipate that (sooner or later) we’ll get around to opening the Sack.

Jez  Can we customize ghosts or will everyone have the same looking ghost?
Very interesting question!
Celticsgreen17  Will you allow gamers to stream the beta on twitch from their PS4/Xbox One this summer?
We will do far more than allow you to share your glorious war stories from the frontier. We’ll amplify your voices, if they are brave. Some of you will even be selected to play a role in our stories, as we go to war with (and against) our community in the wild for the first time. That will be as glorious a moment for us as it will be for you. Watch this space. We have plans within plans within plans.
Destiny, after all, is a thing to be shared.
Thatspacewizard  Will service years on bungie.net be reflected in-game, in any way?
Yep.
Sect79  So far, all of the trailers, in-engine and screenshots of Destiny have looked really awesome. Will the final build on next gen (particularly PS4) product look as clean and smooth as what we've been shown?
What you have seen is not even our final form.
Hawke  Hawk or Hawke?
Hawk. No offense. You’ll understand why soon.
COTU  When do you guys gear up for GDC? Can we expect something big this year?
That all depends on how curious you are. The Game Developers Conference is where alpha geeks converge to discuss their craft. We’re sending six of ours. They’re pulling back their respective curtains to show off the buttons and levers that will drive things like your face, your armor, your career search, and our development processes. In the words of Bruce Wayne, it’s all a bit technical.
We’ll carve a few notes from their sheet music so you can sing along, assuming you can follow their rhythm.
Noble  Are you going to waste a question by answering this question?
Did you feel like you were a wasting a question when you were asking it? Lay down on my couch. Shall we discuss your sense of self-worth? Bungie loves you. Don’t despair.
ForsakenNoble  Have you ever had such a large community for any of your guys' other games? How does it feel to just sit back and see the HUGE community that has been built up around Destiny? As a member of the community, I think I speak for us all when I say it's awesome.
We’ve never had a community this large for a new game that had yet to be released. And yeah, it feels good, man, if not a bit terrifying. You honor us with your enthusiasm and (for the most part) your patience. We’re busting our asses to live up to that.
Like the people who were waiting for Halo, we expect you to have some new friends when all is said and done. Like our game, our community has yet to achieve its final form.
mickey young  In the moon trailer, we see that big chain several times as the guardians go down into the hell mouth. They never showed the end of the big chain. 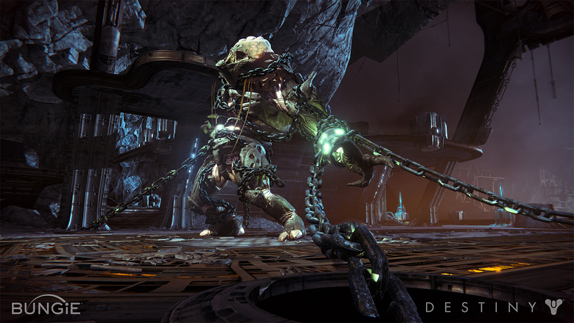 ramenloverninja  What is your preferred method of slaying trolls?
We prefer to leave them to the Ninjas. If you encounter a troll on Bungie.net, their date with Ninja Justice is just a click of the Report button away. Don’t suffer the slings and arrows of poor Internet conduct in silence! Activate your friendly neighborhood judge, jury, and executioner!
Cobra Commander  Are we there yet?
We are not there yet.
Every week brings us closer. Over the next eight weeks, Luke will implore me to walk the floor more often, to watch as what you will call Destiny emerges. I’ll share what I can. Again, you must remember that my job is not spoil your fun. It will be much more rewarding for you say “Look what I found!” than it would be to say “Listen to what DeeJ told me.”
Urk and I are leaving the crow’s nest again next week. Our mission will be to enlist more powerful allies in our quest for world domination. We’ll share our adventures when it seems appropriate, but our objectives will be top secret.
Upon our return, we’ll bring you up to speed with the team.