Feb 21, 2014 - DeeJ
Today, we dine in hell. The Bungie Pentathlon is upon us. The definitive victors from last year are anxious to etch their names on the hallowed Fist yet again, proving to all that their dominance of the org chart was not a fluke. For everyone else, there is a guarded sense of equal worth to prove. The fates of all fools will be decided before the smoke clears. 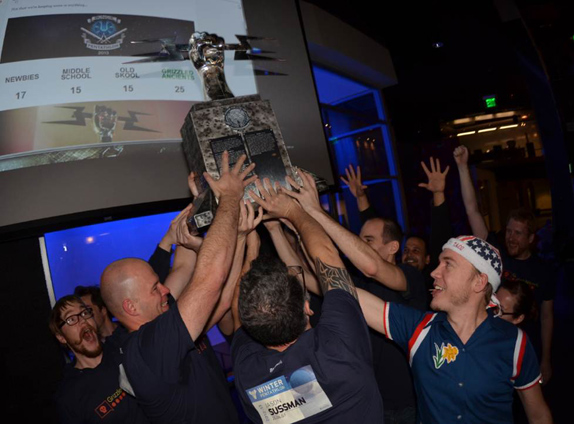 Today, the stars and planets align. It was Bungie.net user Flying Vivo who first applied the timestamp to decipher the alphabet, and discover a pattern in the chaos. At this very moment (7:09:05 AM) on the 21st day of the 2nd month in the 14th year of this century, we find magic in the air.
2-21-14 07:09:05 = B-U-N G:I:E
What do you do when there is magic in the air? At Bungie, we seize it in our fists and wield it as a weapon. The Pentathlon is a celebration of games. It is also a war. Above all else, on this day, we anoint a school of heroes in a coliseum of our own making.
Before the hostilities erupt, we’ll feast on a breakfast of champions. Throughout the day, those of us who truly deserved that meal will be chosen by a gauntlet of events. The competitors are ready. They have been carved from the Bungie team roster into four dueling schools. After weeks of conspiracy and training, we are ready to collide in a field of battle stained crimson with our own blood.
First, a declaration of war from each headmaster:

This is simple. The Newbies have wit, speed, intelligence, are still in the target demographic for our products, and actually put forth effort when they approach tasks. This will be an easy win for the Newbies, and an embarrassing reminder of who is truly valuable at the company.
Stephen VanWambeck, Captain, Newbies

For the Angel of Death spread his wings on the blast,
And breathed in the face of the foe as he passed:
And the eyes of the sleepers waxed deadly and chill,
And their hearts but once heaved, and forever grew still!
Ondraus Jenkins, Team Captain, Old Skool

Forged in secret in the darkness before time began, we Grizzled Ancients now walk freely among the humans whose tears provide the only sustenance we require. Also, Cornhole.  We like to play Cornhole.
Ben Wallace, Captain, Grizzled Ancients
To those of you who are about to game, we salute you. One shall stand. Three shall fall. The Fist is waiting for the next names to forever stand in monument to bravery and prestige.
The Field of Events
How shall we determine which school will graduate with a degree in glory? Why, we’ll play games, of course. On this day, we shall meditate on all that is good and true about healthy competition, as well as the bonds of friendship and teamwork. We’ll beat up a fresh build of Destiny as we beat up on each other. As we learn about our game, we’ll learn something about ourselves.
Destiny Competitive Multiplayer
Combatants from each school will journey to destinations far and wide. There, they will set aside their differences with occupying aliens to battle their fellow Guardian. We commit them to the arena where we will boil them down in a crucible to see whose magic is pure.
Destiny Strike
One mission. One goal. Four teams. They may cross paths in a public space, but they will not meet as friends. Each of them will blaze a trail to their end goal. This is a race. Each school believes they will cross the finish line first. Only one prediction can come true.
Destiny, Destiny Evolution
Who shall take the most steps toward becoming a legend? We’ll send fresh Guardians into the wild in search of the loot that will make them more powerful. The hunt for relics from the Golden Age is on, and only the finest warriors will emerge with the most toys.
Destiny Raid
You do not beat the Raid. The Raid beats you. That’s the grim warning issued by its architect. Such prophecies won’t stop each school from venturing into the darkness to solve the riddles that lie within. This is our toughest Destiny event in competition – the highest bar to vault.
Puzzle Hunt
From the mind of Alpha Lupi comes a cypher that will take all day to solve. Secret codes will be embedded in every corner of our studio, from the flicker of the lights to the soundtrack that scores our movements. Whomever can stitch them together will learn the answer. It’s the question that drives us.
Cornhole
Grain will be tossed. Boxes will be holed. Does this need to be explained? It’s likely that this event is perennial because the Exalted Pentathlon Committee loves to giggle when it comes up in planning sessions. “Should we play Cornhole in Uranus?” they say. Always gets a laugh.
Poker
Place your bets. Ante up. If you can outsmart your opponent, the pile of loot in the center of the table is yours. Life is a gamble. Poker is its metaphor.
A Spectator Sport

All day long, a menagerie of side-events will delight, confound, and entertain all who stride our halls. All will be documented. At the peripheries of this window into our world a storm of games shall rage. To sample the flavor from every corner of our studio, keep an eye trained on our Twitter feed. To cheer your favorite school from the bleacher seats, stop by the official Pentathlon discussion group right here on Bungie.net.
Or, just watch this space for updates.