Feb 1, 2014 - DeeJ
This week at Bungie, we gained a fresh perspective.
We welcomed friends, old and new, to visit our studio. We palavered. We broke bread. We played a ton of Destiny.
This is a rarity, of course - a perk reserved for partners who have joined us on this adventure. Before we launch, we have a lot of ground to cover, and many, many stories to tell. Just like this lone Titan, our chances of success increase exponentially when we choose the right allies and arm them with the gear they'll need to get the job done. 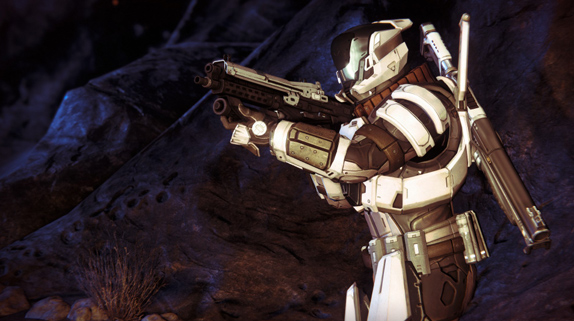 When Jason Jones talked to Game Informer, he described what makes everyone at Bungie so excited about this moment in our history.

“We’re trying to build a game that we have wanted to play that doesn’t exist.”

Time and again, we’ve found that the best and fastest way to explain Destiny is to simply let people play. We peel back the curtain, and lead them on a tour of the destinations we’ve built. Their professional composure breaks down, and we can hear their inner-gamer betray professional polish with a hushed whisper under their breath. “Holy $#!7…!”
Then, when we send them out in Fireteams to shoot aliens in the face, and the whispers turn into excited shouts of camaraderie and combat chatter as they fight, die, regroup, and overcome with other Guardians at their side.
Eventually, once they're ready, we pit them against one another in competitive multiplayer. Coworkers become rivals, and sparks fly as Guardians turn the power of the Traveler against one another. Conservative demeanor falls away. The intense competitive action seduces their inner warriors, and the ceremonial talking of trash reaches the pace of a runaway train.
Some of them played all day long. They rushed their meals. They stayed long after their schedule told them that they were free to go in search of dinner and cocktails. At the end of the day, we had to literally kick them out of the building – with a smile, a bag of loot, and a hearty business hand-shake, of course.
That is some of what Destiny is – a sampling of some of what awaits. The beta is coming. We’re out to prove our concept of a world worthy of heroes who will join together in an adventure that’s expressed through blinding action.
Before that happens, we’re prepping our allies for the stampede. Inviting fresh eyes to drink in the world of Destiny is as exciting for us as it is for the owners of those eyes. Every day, we’re heads-down on our respective piece of this puzzle. Our noses are pressed to our own grindstones. When someone joins us in knowing what Destiny is, it’s a reassurance that we’re getting closer to our goal.
We’re in the process of readying ourselves to prove this to all of you. Our deepest hope is that, when the time comes to bring the Beta to a close, you’ll heave that same groan of disappointment. We’ll have to tear the controller from your hands. You’ll want more. If we do our jobs right, we’ll be all too happy to give it to you.
First, we’re placing our pieces on the board. Next week, those preparations send me and Urk on another excellent adventure.

We’re crossing the pond to make new friends that will put a controller in your hands. Or, perhaps they already have. Most of those new alliances will be forged behind closed doors. That doesn’t mean our Twitter feed won’t let slip some flavor from the journey, as we swing from vine to vine.
Every week, we sit on the ground and tell the stories that won’t demystify your future adventures. We comb our forum for questions that won’t stain the canvas of your unspoiled imaginations. We open the Sack.

Krimm  After Halo 3, we saw some really interesting bells, whistles, and services. Stuff like matchmaking heatmaps, Bungie Pro, Reach Stats API, etc. Will any of those be making a return in a Destiny appropriate form?
Every Halo game brought something new and exciting to the game. A lot of those innovations were inspired by the way our community grasped the reigns and drove the experience to places we couldn’t imagine. We are already building features intended to extend and enhance the core Destiny experience, but we’re also incredibly excited to see and react to the things players do with our world. We are trying a lot of new things, after all.
One Armed Ninja  In Halo, I was always most comfortable behind the wheel of the Warthog or Piloting the Falcon/Hornet. Will the need to operate these vehicles be satisfied in Destiny?
I’m like you. My favorite games of Halo were won without my firing a single shot. My only question for you is: How did you drive a Warthog with one arm?
From one vehicle hound to another, you’ll love your mechanical mount in Destiny.
FunguyV  Will there be animal mounts?
We considered animal mounts, but the weight-load of the Titan’s heavy armor kept breaking their backs, and we knew that PETA would go absolutely berserk.
RizeoftheFallen  It just so happens that Bungie lives in the same area as the Seahawks, while I live in the same area as the Broncos. Will anybody at Bungie be sad when the Broncos defeat the Seahawks in the Super Bowl this Sunday?
Seven is not our only lucky number. I have a Bungie Beta Code that says your prediction is wrong. 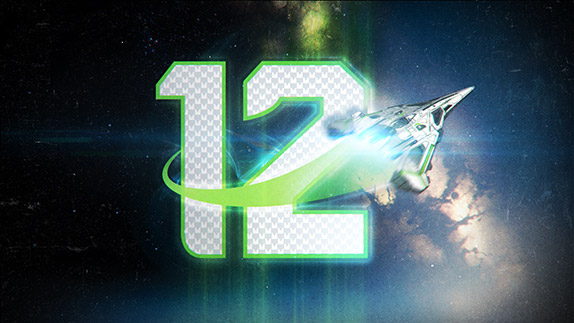 burritosenior   Can Bungie Employees go to their own midnight releases (Tuesdays ugh!) or need they sleep for work the next day?
Well, of course. Some of our favorite moments from years past involve release night. We take to busses and visit weary masses waiting in line. We thank them for their courage in braving the cold, dark night for the right to be the first to fight – and for giving a damn.
Unless you’re on one of the teams involved with launch night support. Then we have to chain you to your desk until the all clear sounds.
craZboy557  What were the political and religious ramifications of the arrival of the Traveler?
Everything changed with the arrival of the Traveler.
JazzSam  Has bungie any plans for some form of second screen experience?
The Companion will let you explore the world of Destiny wherever life finds you. To prepare you for its arrival, register for an account here on Bungie.net and (if you’re sorted with a compatible device), download the Bungie Mobile Application. There will come a glorious day when both platforms will become your Tower away from the Tower.
DE4THINC4RN4TE  Will my compatriot's own legendary adventures affect my own when we play together?
The whole idea of bringing you all together in a living world is to let you be characters in the story. When your friend the Warlock throws a Nova Bomb that incinerates a swarm of advancing enemies while you scramble to reload that belt-fed heavy machine gun in the corner where they’ve trapped you, it’s pretty safe to say that you’ll feel as if your adventures have been affected.
USplendid  The Hive: Space Zombies or are they more akin to Nefarious Space Mummies?
Humanity hasn’t had contact with the Hive for generations. It’s not likely to be a concern. They’re a myth, really – the sort of stories we tell our children to get them to finish their vegetables. Your active imagination is rather charming, however.
Zenkid100  In the Gameplay reveal it looks like the hand cannon and pulse rifle have unlimited ammo was that a place holder or do special and primary weapons have unlimited ammo in co-op mode.
You’re not up on your Bungie Podcasts. Ammunition is the carrot that you’ll chase. Don’t take it from me. Sandbox Designer Josh Hamrick will explain the whole scenario.
Tactica  (from the Guardian Radio group thread) Will there be "Aspirational Goals" in all game modes, or just certain game modes?
There are certain game modes that will be aspirational in that you won’t be able to tackle them until you earn the right. So much of Destiny will be aspirational, though. When we say “Become Legend,” we’re talking about an urge to become better, stronger, and more talented. You’ll see that Guardian sauntering through the Tower draped in exotic gear, and you’ll aspire to look that badass. You’ll behold someone that dominates the combat in the arena, and you’ll aspire to be so skilled. You’ll stand and watch as an advanced Guardian takes down a Fallen Captain in a public space, and you’ll aspire to be that powerful.
Zoboso  What is the question you desire to answer the most?
This next one…
Dmoney12321  So what's up with your "beat around the bush while still whetting our thirsty, thirsty appetites in a DeeJ sort of way" answers?!?!
It’s been suggested that I take pleasure from teasing you. There are those among you who think that I enjoy depriving you of the information you want about Destiny. The truth is that I respect your adventurous spirit too much to deflate the wondrous moments we’re packing into this story. Remember the first time you saw Star Wars? Think back, I’ll wait. Imagine if the guy who tore your ticket said “Enjoy the show. It opens with a breathtaking shot of the biggest spaceship you’ve ever seen, followed by a killer gunfight.” How would you feel about that guy? Would you punch him in the face?
I don’t want to get punched in the face. Your mom likes my face.
These are the risks worth taking. You’ve reached the end of this weekly update. We have bags to pack. Next week promises more fresh eyes, and each of them will move us closer to launch.
See you cloudside.