Dec 6, 2013 - DeeJ
This week at Bungie, we’re taking our time to get it right.
New looks at long-planned user interfaces came to life, both in the game proper and within a frontline experience we’ve yet dared to put on full display. You’ll wait to experience some of these touches right up until the moment you come face to face with your first Guardian. Others will lead you into the action and reveal where your greatest threats might lie.
A brave actor walked into the Spandex Palace wearing a pair of badass boots that you might step into someday. Another member of our community joined the team to help run Destiny through a gauntlet of pre-launch challenges. Unseen highways were laid to drive you toward public spaces, where Fallen Captains still surprise us with the fantastic ways in which they die as we overrun their defenses.
A small, but important portion of our beloved mascot was returned to its rightful place. Fragments of fiction were scattered throughout the solar system for you to discover. And these are just the small bits and pieces of development we can share with you this week. 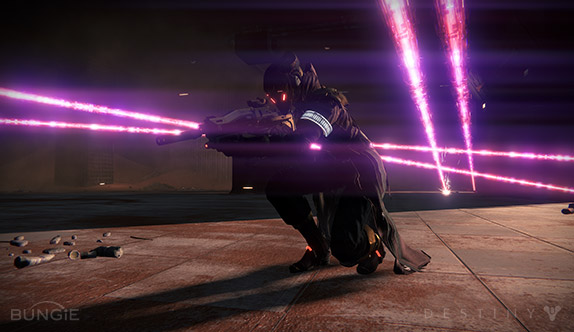 There is more work to be done, but each and every time we describe our weekly progress in this space, we get more and more excited about what you’ll see and say when you finally get your hands on the game.
This week, we set that date in stone: September 9th, 2014.
In an interview with the community back in 2001, Jason Jones once lamented the inexorable tick of the clock. More recently, he reminded our studio just how valuable the coming months will be, and challenged the team to make every second of Destiny development count. It’s an exciting time to be at Bungie. The stage is set, and we’re going to make these moments matter. We believe Destiny will be worth the wait, and we’re anxious for the chance to prove it to you.
An Informant in Our Midst
Many of you already saw much more of Destiny earlier this week. The visitors we’d been hinting at weren’t mere house guests. Game Informer brought notepads, cameras, and an insatiable curiosity for all things Destiny. They spent a two full days playing and asking pointed, detailed questions.
For the first time, we opened our playtest lab and gave a few outsiders a proper initiation to the world of Destiny. We tried our best to gauge their reactions. Their faces were stone, hard and emotionless. Like you, we waited for the coverage to hit. Unlike you, we waited with bated breath. 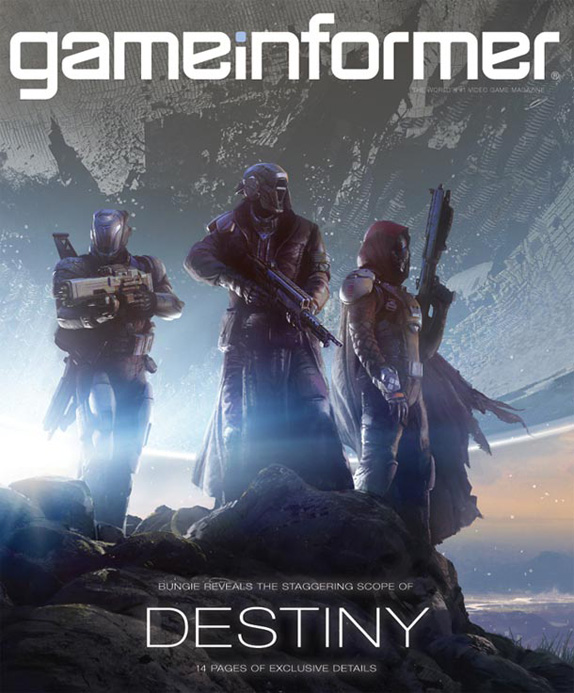 Destiny is on the cover of their January issue. If you’re a subscriber, you can read their initial coverage right now, and check out their ongoing digital coverage here. It already includes multiple, in-depth interviews from the team at Bungie covering some of the meaty details you’ve been waiting for.
They’ll have even more coverage as December rolls on.
If you don’t subscribe, Game Informer is in the process of felling trees, turning the chemically treated pulp into sheets of paper, and printing physical issues. We hear they should be arriving on shelves at your local GameStop next week. If you’re planning on picking up a copy, ring them up in advance to make sure your trip is fruitful.
The Ombudsman Is In
So, you’ve got questions this week – hard-hitting, direct, and uncompromising questions. You always do. Before we dig deep into the Sack, we’ll do our best to forecast and address your inquiries. Here’s two we’re pretty sure might be tumbling around in your noggin after today’s announcement.
I already pre-ordered!  What do I do?
First of all, we want to take a moment to say thanks. You’re the best. You are a classy and intelligent person with loads of charisma and charm.
You don’t need to do anything to keep your preorder intact. In this wonderful age of technological advancement and innovation, your retailer of choice has everything they need to ensure that your reservation is rightly honored.
What about my beta reservation?
Assuming you pre-ordered at a participating retailer, you should have been given a code to reserve your spot. That reservation is still valid. You can register by completing the registration process here.
The beta will be scheduled for summer 2014. As soon as we have a more concrete date, we’ll make the requisite announcement.

Self Defeat  How many focuses will there be for each class?
Whoa! Look at you, knowing about stuff. The real question on our minds is how to best pluralize “focus.” “Focuses,” as you’ve elected to use, feels nice and casual to us, but is it as accurate as “foci?”  And though “foci” is clearly technically correct, doesn’t it come with an air of pretention that could make it off-putting for a lot of fans?
We’ll have to get back to you on this one. We hear Game Informer might have an interview in the pipe with Tyson Green that goes into more detail on this topic.
Charlemagne  Can you go into some of the backstory for Destiny? What can we know that happened before the game?
Admittedly, we’re being uncharacteristically protective of Destiny’s detailed backstory. You already know the big, broad strokes, but that’s not what you’re asking for. Unfortunately for you, wrenching the specifics free from Jones and the writing team’s hands has proven to be a fruitless endeavor on our part.
It’s all for good reason, however. There are a number of mind-blowing revelations we want you to experience firsthand. That’s not to say you won’t be getting more details about the backstory before launch – you undoubtedly will – it just means you won’t be getting them today, or any time soon.
For the time being, you’ll have to setting for the few pages of destination and enemy combatant lore packed into the Game Informer coverage. The details there are more telling than you might imagine.
EvilDoctorPhil  Does Bungie still seek world domination?
Step 7 isn’t something to be sought after like a wandering mendicant. Do we seek it? No. We have meticulous plans.
Ponthegan  Of all the sounds created for Destiny so far, what Foley effect has been the most unique/weirdest/most memorable to create; how was that sound produced by your Foley artists?
For a sound answer to this question, we defer to Foley Auteur Stephen Hodde:

A friend of ours was nice enough to invite me to his garage to record things like welding torches, grinders, and drills. Perhaps the most magical recording I have ever captured was his flaming bunghole. You see, he ages locally distilled white dog into whiskey. Part of that process involves charring the barrel’s innards. Lighting the inside of the cask from a hole on the top causes  fumes to ignite and shoot fire out the bunghole. A pressure vacuum results inside the cask, which sucks air back in, and then immediately shoots out more flame.
This is the result.

Will you be able to find that in the game?

Silent Guardian  Are we there yet?
No, not yet. Soon.
Some rituals will never die, it would seem. Fortunately, the Bungie Weekly Update is one of them. It’s part of the cycle.