Nov 15, 2013 - DeeJ
This week at Bungie, we (alongside the rest of the gaming world) witnessed the birth of a new generation. To celebrate the occasion, we invited you to peer deeper into the brave new world that will be waiting for you to explore on new consoles.

This is an interesting time to be making games – one that gives us an opportunity to wrap our arms around more of the world than ever before. Destiny is a game that we’re making for four consoles - new and old. As much as we’re committed to delivering a great experience to as many people as possible, it’s pretty easy to stand in awe of the new arrivals. And more deliveries are on the way.
We received the news like the fans of gaming that we are. While Pete was canoodling with the devastatingly handsome Geoff Keighley, we were clustered around that same projection screen that you can see in the shout out at the end of our launch video. Anxious chatter spread through the crowd. New frontiers. New options. New possibilities. New friends to make. Celebrations aside, there is still work to be done at Bungie. New faces joined our team this week, to help us move the yardstick. This happens more often than it doesn’t. While most of the measured distance we traveled toward the Beta these last few days cannot be spoken of openly, there are some things we can tease. We’re starting to see the way you’ll display your war trophies on Bungie.net. A massive river in Old Russia was infused with rapids and mist.
From the ashes.
Far away from the console wars, we’re waging our own battle at Bungie. Some of those skirmishes are against hostile invaders from other worlds. Others are against each other.
Last week, we loaded our Guardians onto a raft, set it ablaze, and kicked it out to sea. This week, in our own proprietary way, we witnessed the birth of a new generation. Our Guardians were revived to fight the Cabal another day. 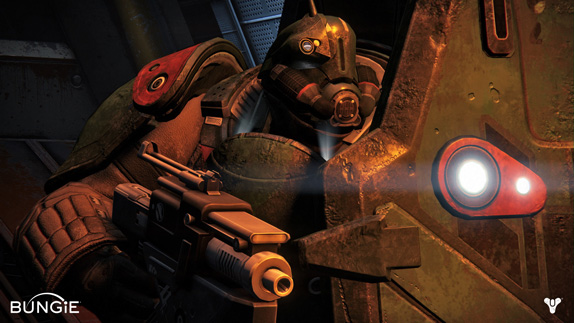 So many war stories can grow out of a lunch break…
A tester who wields our next gen Banhammer embarked on her first ever game of competitive multiplayer. The first taste of teamwork was sweeter than wine. She walked away instantly hooked and drunk on the thrill of a narrow victory.
An engineering lead played so much Destiny, he missed a meeting. Then he missed lunch. From the drought of starvation grew superior firepower. Through means we cannot yet explain, he acquired his first heavy machinegun. Zero buyer’s remorse was experienced as he used it to “rock some faces” in multiplayer.
A Designer taught a Tester a harsh lesson: There is nothing more depressing/amazing than being Nova Bombed just as you are revived. Which emotion you feel depends on which side of the bomb you find yourself.
One engineer confessed to running like a scared child as Hive reinforcements beneath the Moon reversed the good fortune of his Fireteam. Another engineer bragged about standing his ground, and fighting off aliens with an ancient sword claimed from the grotto.
While one tester embarked on a love affair with his personal vehicle, another tester discovered the merits of the Sniper Rifle in directing the flow of traffic. Hint: the tactic involves removing the driver.
A designer finally scored a grenade kill that had eluded her over scores of instinctive tosses. Not a single coworker was distracted by her sudden triumphant crowing. It’s just another day in the studio.
Throughout all these battles (won or lost), something interesting is starting to happen: community is starting to grow out of our game. It’s a small community, compared to the space we’re building for it to fill, but it makes a promise about what awaits. Special teams in our studio tend to play this game like small groups of friends. When a new build brings us together in playtest, we have chance encounters with people we would have never played with otherwise. Waves are exchanged with gunfire. New friendships are claimed on the battlefield like sweet loot.
Through the hourglass.
When we’re not turning a Friday happy hour into a studio-wide safari into a fresh build of our game, the Multiplayer lab doubles as a Thunderdome. We’ve mentioned it before. Many competitors enter. Only one leaves as the Weekend Champion. Thumping skulls and keeping score is a great way to end the week. It’s also a great way to see if territory in Destiny is becoming a thing worth fighting for. Our most recent Champion was one Coolie Calihan. To claim the trophy for his desk, he had to best a formidable crew of competitive personalities. He’s an artist that envisions arenas. His victory teaches us a lesson: Never fight an architect in his own creation.
“The matchmaking gods saw it fit to put us on a map I designed,” Coolie confesses. “It has tight corridors and choke points complimented by roomier flank routes. For this round, I knew I had a big advantage in map knowledge.”
With all the weapons and tactics at his disposal, Coolie made a decision that favored brute strength. “I chose to roll a Titan for this round for the beefier armor, tactical grenades, and close quarters mayhem.” This monstrous Guardian was armed with an Auto-Rifle, a Fusion Rifle, and a Heavy Machinegun that boasts a blistering rate of fire.
Coolie can also tell you that choosing your weapon is as important as how you choose to use it. “I knew that to win on this map, with my build, I had to play it careful and avoid over-committing in the pursuit of a kill.”
According to the man with the floorplan, knowing the space helps you to set a trap. “I stuck to a few interior rooms that had connections to decent sightlines. That let me either flank my enemy or intercept them on their way to a fight.”
If you’re keeping score at home, that’s one trophy for a Titan, and one for a Hunter. This left me thirsty for more perspective for how the three classes in Destiny counter each other. For a sip from the cup of knowledge, I approached our Sandbox Design Team. Previous champion Josh Hamrick (seen photobombing above) poured out the details as to why his beloved Hunter doesn’t win every match.
“The Hunter has lots of speed and mobility that make him a nuisance to the Titan, but if he ever gets pinned down, the Titan uses his strength to destroy,” Josh confesses. “We have played games where the Hunter NEVER, EVER loses… but it’s because we were all Hunters.”
According to Danny Bulla, one of Hamrick’s sandbox playmates, the Titan’s prowess is a product of evolution. “Every day we are giving each class new toys, new ways to defeat their enemies. The Hunter naturally rose to the top early on, due to its speed and mobility, but the other classes are beginning to come into their own.” 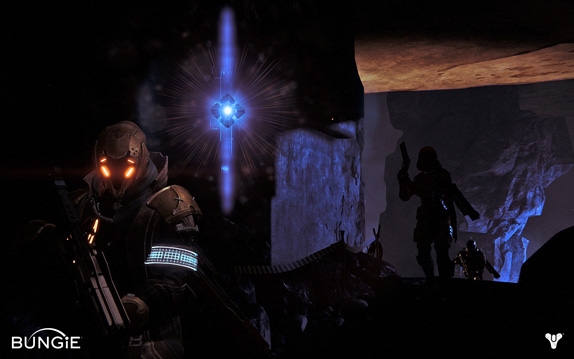 This is what Sandbox Designers at Bungie think about every day. How can we make a game with three combat archetypes that are all worth playing? How can we balance the carnage between three distinct ways to fight?
“Each class has multiple things that are guaranteed to make other classes jealous, which is super cool,” proclaims Josh.
Danny sees their design process as one more way that Destiny will appeal to lots of different gamers. “We try to identify the main play styles that we think players enjoy the most, not only from shooters but from all types of action games,” he tell us. “One player may enjoy rushing his enemies down with an auto rifle while others may want to hang back and focus on accuracy.”
These might not be the things you think about when you ponder the word “sandbox” in terms of a video game. Nevertheless, the terminology makes perfect sense to Josh. “A real sandbox is often filled with toys.  We create that space and fill it with those toys and watch how they all interact with each other.”
It’s not quite as easy as dropping shovels and pails into a wooden box. “Sometimes things just don’t work together and we have to rip them out,” Danny observes. “Other times, interactions that we could not have imagined happen. Those are the best type of interactions.”
I wonder what’s in the Mail Sack! Let’s find out.

Caballero  Do you guys ever get tired of people calling it an MMO?
Not at all. Do you guys ever get tired of us insisting it’s not an MMO? Debate about this game is always fun, and we welcome it. The ideas that are shaping Destiny come from a lot of different places. We’re drawing the best elements from experiences we love. Like an MMO, our game will compel you to explore. You’ll embody a character that evolves on that journey. Unlike an MMO, the entire experience is built around heart-pounding action that you’ll see through the eyes of your hero.
Ultimately, we’re looking forward to knowing how you describe Destiny, once you’ve played it.
elstrix  Will those who play in the beta be able to create and customize their own Guardian?
That’s the plan – for now, at least. The essential experience in Destiny is bringing a character to life, and earning the rewards that will make you a legend. The Beta is your first taste of that ritual.
EternalAngelEX  DeeJ, if you were to choose one of the three beautiful classes which would it be?
The Warlock. Every single time. Mind you, there is no wrong answer to this question. If you read above, each Guardian has something to make the others jealous. When I look into that sandbox, it just so happens that the Warlock makes me the least jealous.
Plus, his fashion sense is deliciously eccentric. That’s important to me.
OPs mom  We get whips?
whip (noun) a slang term for a vehicle.
Yes, but that was a well misunderstood expression. Please cease and desist with all the Indiana Jones fantasies.
This concludes another work week. We made it. You know the drill. All of this has happened before. And it will all happen again. See you in another seven days.