Destiny Drawing Board: The Hunter's Knife

Nov 13, 2013 - DeeJ
“A symbol of those who survive outside the protective walls of the City.”
Tom Doyle, Art Lead 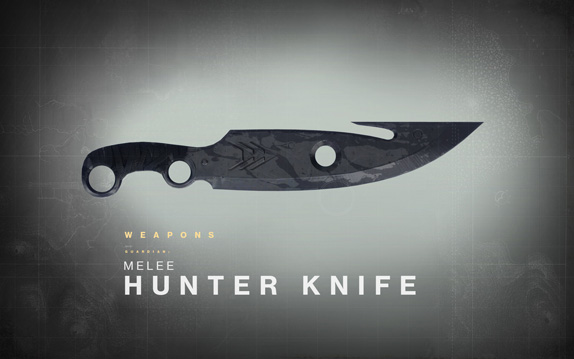 Concept: Tom Doyle
3D Model: Milton Cadogan
A Guardian’s arsenal bristles with guns. At any moment, three of them will step to the forefront of your inventory to put a variety of firepower at your fingertips. While keeping your distance from enemies of the City will always be wise, the mayhem of combat won’t always afford you that luxury. More desperate (or more strategic) moments will command a more personal touch.

When the need to reach out and strike something arises, the Hunter will unsheathe their Knife. It’s just one expression of close quarters fighting in Destiny. Bungie Sandbox Designers have thought long and hard about how to weaponize the hands of the Hunter, the Titan, and the Warlock. Tom Doyle takes those ideas, and forges them into works of art. “The inception for this weapon came from the desire to have special melee attacks for different Guardians,” he recalls. “First-person melee attacks were a great place to define a unique feel for each class.”

The Hunter’s Knife is, like the rugged assassin that carries it, a reflection of a harsh environment. “It’s a weapon that embodies the reclamation of the new frontier,” Doyle observes. “It’s equal parts kukri, trench, and buck knife – a hunting tool just as much as a weapon.” 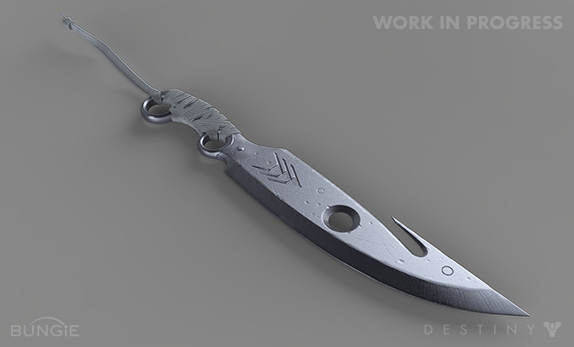 Melee weapons suggest a means of last resort. In the case of the Hunter, this blade also serves a tactical choice that favors stealth. “The hooded class of Guardian satisfies a survivalist fantasy,” promises Doyle. “We wanted to give the Hunter weapons that felt rugged, utilitarian, and quiet.” For the unseen hand, this weapon enables the silent kill.

This fighting implement falls well outside a conversation about “cutting-edge weapons technology,” but the Hunter’s Knife has a way of driving its point home in its own way.
Disclaimer: Destiny is a work in progress!
This is just one weapon in an ongoing series in which we'll dig into the finer details of our upcoming first person action game, and explore how every element shapes the brave new world where your adventure will take place. All items, details, names, and pieces of random trivia are subject to change or melt-downs in the event that they become dull.