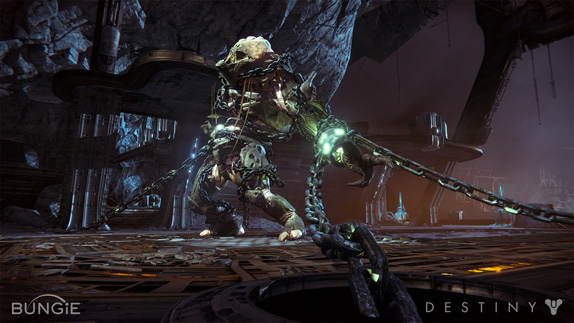 Something has been festering deep below the surface - planning, waiting, brooding.  A snarling, ferocious beast, it could not be contained. Its chains have shattered under years of strain. Once again, it’s free to resume its rampage.
No, we’re not talking about Luke Smith. We’ll unleash him later. We’re talking, of course, about the Bungie Weekly Update.
For the better part of a decade, Bungie has made each Friday just a little sweeter by opening (for a just a moment) a window into our world. It’s been a chance for us to share some of our work, along with our “special” brand of charm.
Then, a little over two years ago, we found ourselves exploring the unknown space between two worlds. One world was known to millions, familiar and understood. The other was a mystery in many ways, even to us. That new world demanded our secrecy. As unnatural and unwelcome as it felt, for you and for us, we shuttered our window, and pulled down the shade. We went dark.
Patiently, but painfully, we waited. And we listened. But we couldn’t risk the old level of transparency. Building a new world isn’t exact science. We don’t publish blueprints (at least not intentionally), and we don’t paint ourselves into corners.
The last time your week culminated with a proper update from Bungie, we we’re in a very different place. We had just celebrated our twentieth anniversary. Destiny was the dream of a team that would need to grow and transform to hold fast against the sheer ambition of it all.
The words used by my predecessor to hibernate the old weekly ritual were nothing short of prophetic:
Like all dark times, ours will be broken first by a single strand of light – a tether reaching out to bind us all together again. One day, we will awaken in a wondrous new place and we will remember just what it was that drew us together at the beginning of it all. We will look up to the heavens, and find hope.
That moment has arrived.

Consider yourselves starside. Destiny has risen into the night sky like a full moon, bright enough to throw shadows onto the ground and guide us out of the darkness. It’s still a long sail toward dawn, but we have enough ambient light on the scene to navigate the rest of this journey. As another rite of succession, I’ll be your new guide. I’d like to invite you to follow along with me on this new adventure, as we finish what we started those many moons ago.
Let’s begin again.

The best thing that happened this week at Bungie…
Public Events received enough visual love to make them worthy of being experienced once, or a hundred times. Player Inventories became easier to manage, with new icons for ordnance and new ways to rotate the implements of war in your arsenal. Bungie.net learned to speak Italian (“Ciao!”), and the Mobile App is soon to follow. That brush with multiculturalism has inspired both versions of the site to become a little more fashionable. Internal Fireteams survived scouting missions on the Moon, and discovered new adventures waiting on Venus and Mars. Lunchtime was a constant battleground, with spectacular collisions of space magic to nourish hungry developers. The Ghost was given an injection of fresh personality and brand new behaviors to make him a worthy companion on your missions. Our friends at Activision stopped by to sample our progress, and demonstrated some stunning bravery in the face of certain doom.
Finally, we met 343 in an indoor soccer arena, and snatched a comeback victory from the jaws of defeat. Good Game, guys.
Confessions of a Crash Test Dummy
Hopefully, this week has been an exciting time to be a Destiny fan. Betas can be magical. On several of my previous campaigns as a product of this community, I was all too happy to drive my Warthog headlong into Bungie’s work in progress. 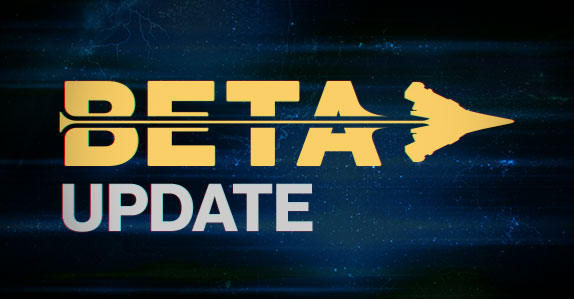 The moment when a Beta begins is a total rush. The walls that surround a hidden world are breached, and the first players plant footprints in fresh soil. A new frontier opens. Every step is a new discovery.
After months of speculating, we can finally visualize the moment when we’ll play Destiny together. We can see that door. It’s not time to unlock it yet, but we’ve begun passing out keys, like this one FR7-JVH-KNY or that one PPD-4PH-RN7.
Did you see that? Those were real live Beta codes. Two citizens of our community just secured their future. The mere thought of it has me anxious to meet them in their first public event and drag their asses to safety.
Accept no substitutes! I’m not the only party who is giddy over the news. For months, we have come to find, dark forces on the Internet have been fleecing anxious gamers of their personal information with the promise of bogus Beta codes. Here’s a tip from your Uncle DeeJ: Don’t share your vital statistics with anyone who is not a participating retailer in the Destiny Beta program. Anytime you find yourself confused about what’s going on, run home to our FAQ. We’ll never lie to you.
This doesn’t mean that someone might not give you a Beta code, just for being you. Trusted leaders of our community may even be deputized to drive enrollment of key personnel. They may even make a game of it, and set up some hoops for you to jump through to win a code of your own, like this one VRK-DGA-PPT or that one DVH-M3A-KGH.
The success of the Beta will rely on patient, eager test subjects who want the best for all of us. We need our community on that front line when the door opens. We’re invading the world of Destiny together, friends. I’m bringing as many of you along with me as I can.
Location, Location, Location…
When we forecast your heroic romp through our solar system, we phrase the dialogue in terms of “destinations.” Each of these sprawling areas of exploration – places like Mars, Venus, or even Earth – feature a variety of locations where you’ll fight our enemies, search for treasure, and uncover the mysteries of our lost Golden Age. With the release of “The Moon” trailer this week, we thought we’d take a deeper dive into a destination as startlingly strange as it is familiar.
Welcome to the Hellmouth.
“The Hellmouth has one function only – to ask of the player what lies within.”
Sam Jones, Lead Environment Artist
As an Environment Artist for Bungie, Sam Jones has led the construction of this destination from the beginning. Here’s what he had to say about the process his team employed to bring the Hellmouth to terrible life.
If you’ve been following the conversation about Destiny since the beginning, this was probably one of your first visions of our Moon. As promised, the mere sight of it leads to troubling questions. To understand the origins and development of one of the more foreboding lunar locations, we descended into the Hellmouth with one of its chief architects. 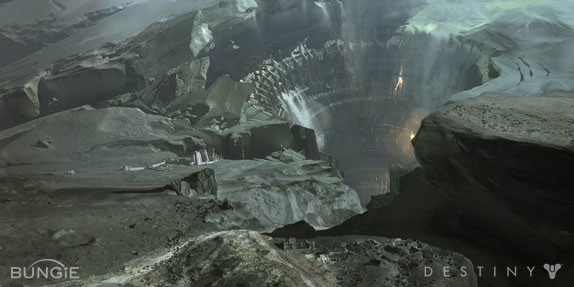 The first step toward realizing the Hellmouth was to create a 2D concept expressing these themes. Mark Goldsworthy’s awesome concept (above) became the picture postcard for the Moon – a visual blueprint from which all subsequent lunar assets have been generated. 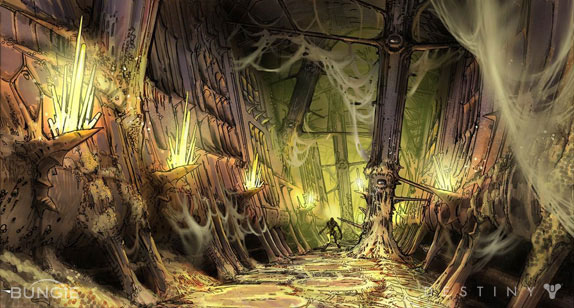 The Hellmouth is essentially a huge slice of Hive architecture. Dorje Bellbrook’s concept (above) conveys many different visual themes for our Hive spaces – accentuated sense of scale, menace, and a hefty touch of the exotic without being too alien. The maw of the Hellmouth takes these principles and expands them to a colossal scale. 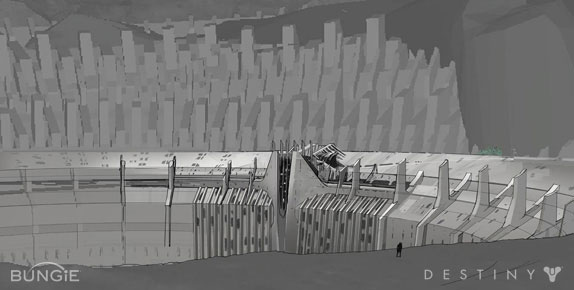 The Hellmouth is a fortress cored deep into the Moon. This structure was always designed to conjure up imagery associated with a medieval castle. Darren Bacon’s concept for the Gatehouse (above) conveys many appropriate themes for the Hive: including mystery, darkness, evil, strength and militarism. 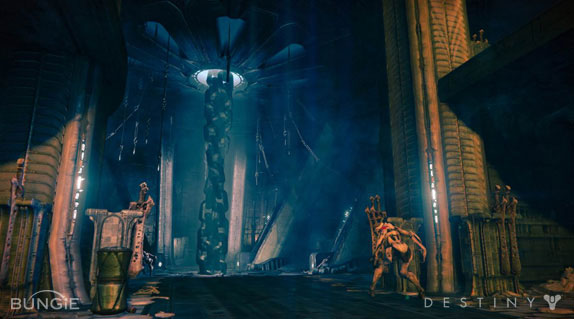 We also wanted to instill visual cohesion throughout. This super heavy chain runs down deep into the dark dungeons beneath the Fortress – imprisoning the Hive’s most fearsome denizens.  It’s a visual anchor point for those exploring the inner sanctum of the Hive. Plus it looks badass and fits right into the whole accentuated gothic air of the Hive aesthetic. 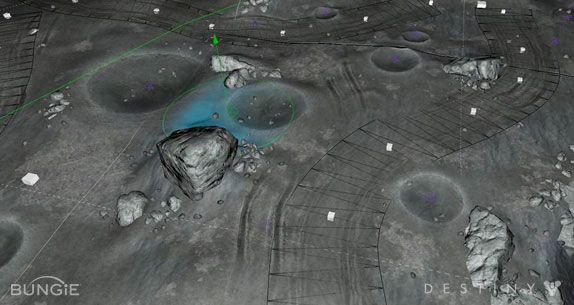 Using Grognok, our awesome world creation software, I was able to take the next logical step and create a ‘3D concept.’  Grognok has some incredible terrain generation and manipulation tools. Creating initial geometry that describes classic lunar terrain was unbelievably easy.  I can literally sculpt the living grey model geometry, replicating pitch-perfect lunar crater patterns with great speed and finesse. 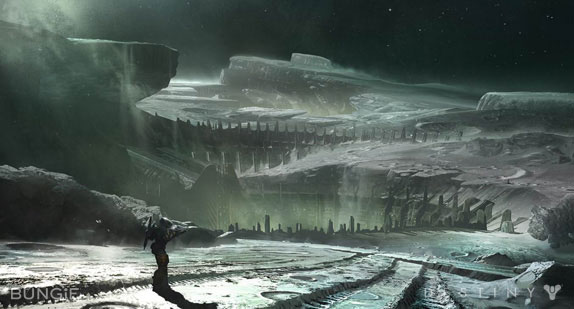 This awesome Hellmouth 2D concept image (above), is essentially a paintover.  Darren Bacon took a screenshot of the in-game geometry and embellished it in Photoshop to take the whole affair to the next level. 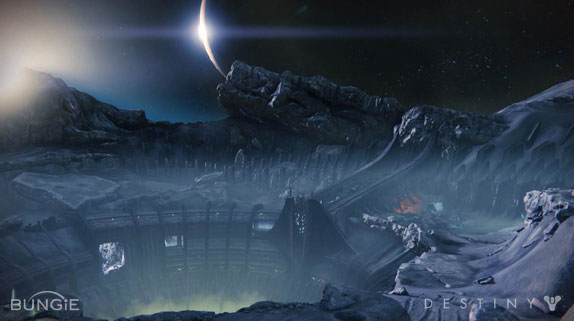 Finally, we see some of the final in-engine geometry, informed by Darren’s incredibly useful paintover.

Have we scared you off yet? This is just one location on the moon. Many more beckon, filled with their own reasons for you to be brave.
And so, the first Weekly Update of a new era at Bungie draws to a close. This has been more fun than a fight with an unchained ogre. I hope it was good for you too, but it’s time to wrap this up and turn you loose. Like the name suggests, we’ll make these updates a weekly thing.
Traditionally, we’ve put a bow on the end of these sessions, like a happy ending without all the awkward questions. Over the years, there has been a parade of low-res illustrations and blame-worthy low-points from matchmaking. Me? I prefer to open the Sack. That’s right, friends. Rumors of its death were greatly exaggerated.

No one person can take credit for these questions. They are emblematic of some of the most common reactions to our announcement of the Destiny Beta.
What if I pre-ordered Destiny before you announced the Beta?
Did you pre-order with a participating retailer? If you did, call them up, and don’t take no for an answer. Some news, no matter how wondrous, travels slowly.  If you didn’t reserve your copy with someone on the list, you have some tough choices to make. Loading a pool of testers into a Beta is a delicate matter. We need to choose our partners wisely.
I live in Sweden. What do I do?
Then you’ll need to pre-order at CDON, Komplett, or Webhallen. The full list of participating retailers can be found here: http://www.destinythegame.com/wheretobuy.
What if I want to download the digital version of the game?
The only way to guarantee your beta code at this time (with the exception of being the first person to claim this one: PCP-9M9-ALP), is to pre-order the game from a participating retailer. They’ll gladly take your five dollars to reserve for you a copy of the game, and ensure that you can be one of the first to experience it as a tester in our Beta. If we don’t blow your mind with your first journey into our world, you could always spend that money on something else.
Any more questions? (That was rhetorical. We know you have more questions.) Ask them now.