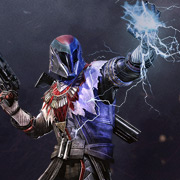 A Proposed Change to Elemental Damage

Watch the video before reading. What doesn't make sense to me is why shields are weak against the same energy they're made out of. An item that, if i remember correctly, the warlock vanguard was selling during the beta had a description that went something like: [i]"From the void, a spark. From the spark, the fire. After the fire, the void."[/i]. This makes it sound like elements are weak against each other. Void beats arc, arc beats solar, solar beats void. Another thing I've noticed is that each race tends to stick to one element. The Fallen are mostly arc based (with the exception of the servitors of course), with the dregs and vandals using guns that fire bolts of arc energy, skiffs dropping large arc energy explosives before dropping off their passengers, Devilwalkers releasing an arc energy pulse and firing an arc energy machine gun whenever players got too close, and even Pike's creating electricity while boosting. The Hive are obviously void based, as we've seem from all of their guns, and the projectiles launched by wizards and ogres. Following this pattern I can only assume the vex will deal mainly solar damage, and perhaps the Cabal will deal mainly kinetic damage. That combined with the elemental weakness circle that's been hinted at, makes sense to me. Zombie's being weak against fire, and robots being weak against electricity, it just makes sense. So logically, if the Hive use mainly void energy, they're going to have void energy shields, which you'll want to use solar damage against. But that isn't how it works right now. If the player were that situation right now, they're best choice would be to use void damage against them. Using dark energy against a race based around dark energy just doesn't make sense to me. So, here's my simple request: Keep elemental damage exactly how it is, but make it so that shields aren't weak against the element they're made out of. Make arc shields weak against void damage, void shields weak against solar damage, and solar shields weak against arc damage. You can't put out fire with fire.
English
#feedback #change #Elemental #damage #sheild #Proposed #Suggested
Comment Reply Start Topic
Report