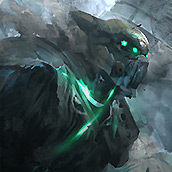 [spoiler]Was listening to some music and it gave me a vibe so I spent a few minutes writing this, stream-of-consciousness. It's probably pretty bad but ehhh like I said I never planned anything anyways.[/spoiler] Raindrops catch glare from the bright neon lights of the city above, making them all the more spectacular—all the more prevalent. The gentle droplets do little to drown out the sounds of society: vehicles rush above and below; monorails weave between towering high-rises; above it all is the bustle of “humanity”. Wonderful, horrible humanity. In this city live twenty million people. In this city are mothers, fathers, sons and daughters. In this city are killers, businessmen, geniuses and failures. The smog of humanity is drained away by towering purifiers, almost equal in height to some of the skyscrapers. The bodies left by the criminal underworld fall to the tunnels below, where the robotic groundskeepers incinerate them. These bodies—these people—will never know anything more—never more be known. Above the crime is capitalism, running on. Crime or corruption is the only success. Only difference is that one has a fresh coat of paint and a bright billboard advertising it. In any given place can be seen the massive offices of some corporation or another. Look a little bit farther, lower, you’ll see the factories and moral gray areas that make up the foundation of these conglomerates. These companies produce the lights and vehicles that substitute stars. They produce flashy displays and imposing architecture. They produce almost everything, but none of it is art. None of it is humanity. The common nobodies fighting to make their way without compromising their own fragile brothers and sisters—that’s humanity. Not the “rebels” making their way by stealing and murdering. Not the “successful” reaping the benefits of sentient suffocation. Humanity is a difficult thing when the whole of the world is against it. It’s “inconvenient” to the process; no one stops to consider the inconvenience of the process itself. Strip away the endless metal and technology, what you have left is still nothing more than a computer, a program. The program runs its purpose, every living, breathing bit serving as a one or a zero in a grand scheme of nothing. The program is almost sentient, just enough to strive for a notion of false progress. The program may increase its own processing power, but to what end? Nothing about the system is beautiful. Nothing about it is worth it. Neon blocks out the night sky. Machinery roars over the sound of the birds. Corporate robots sweep away the plants. Nature, however, isn’t needed to create beauty or art. Long ago, humanity itself was part of nature. Ambition is easy to aim in the wrong places. Beauty is easy to suffocate; but humanity can be a wonderful thing, given space to show. Through the metal, through the smog, humanity persists. And that is a wonderful thing.
English
#Offtopic #Story #sylver
Comment Reply Start Topic
Report