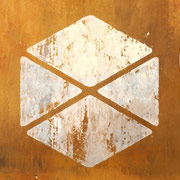 From the thundering steps alone Drifter knew that Sara was close, and that she was none to happy. "How's it hanging si-" before he could even finish his sentence Sara was on him. "So, when were you gonna tell me you had people after you?! People that are looking to kill those of us who even associate with you?!" She seethed, a mere few centimeters from his face. "Easy now. Let's get aboard my ship and I'm sure we can hash this out." He says, backing up as much as he could in the confined space. "You better have a damn good story Drifter." Sara retorted, but never the less conceding and letting him loose to follow. Once aboard the Derelict, Drifter and Sara sat around a table. "So? We're here, start talking." Sara said, staring daggers at the Drifter. "Alright, alright." Drifter sighs, leaning back in his chair. "See, I use to run with this group of rouge guardians, called themselves Dredgen. I can tell by the look on your face that you've heard of em, and that none of it's been good. Well sister, you should know by now not to believe everything your Vanguard tells you. While I was with em, they were a decent sort. A group of guardians looking to use the Darkness against itself. But after a while, things got sour. We started turnin guns on each other, but thankfully the triggers never got pulled. I knew though that it was only a matter of time before someone did pull it, so I got out while the gettin was good. Unfortunately, once you bare that title you never really lose it. You ever heard of The Man with the Golden Gun? Yeah, of course you have. Well, as you know, he doesn't take kindly to those that use the dark in any way. Which means he's after me and anyone who's working with me, which now means you." He explained, kicking his feet up onto the table as he finished. Sara took a moment to drink it all in. As furious as she was with the Drifter keeping this a secret, she also appreciated actually being told something for once, a thing the Vanguard seemed to have trouble with. Regardless, she was already in too deep. "So" she said after a long silence "I'm assuming you have a plan to deal with him?" Drifter chuckled "I knew you'd see it my way." He stood up and threw a little projector onto the table. Pressing a button on the side of the thing, a white image blared out. It looked like the same thing that had eaten Uldren in the Watchtower. "How the hell do you have a holo of that thing?" Sara asked, pulling herself out of her chair. "Well, while you were out prancing around the system, this bad boy showed up during a Gambit match. Not sure what caused it, but what I do know is that it radiated an energy unlike any of the other primes." He said, leaning in the table. "The Guardian team fighting it almost died, permanently, but I pulled them out before it could do anything. But my gut is tellin me that what we need to scare off The Man is in that thing. Which means we need to kill it." He exclaimed. It was in that moment that Sara understood why Drifter had called the game Gambit. It wasnt about risking guardian lives for strength, it wasnt about us learning to use the Darkness. No, this Gambit was all about finding a way to stop The Man for good. And Sara was ready. Ready to forge a new guardian killer. "Tell me how to bring it out."
English
#lore #destiny2 #Gallery #fanfic #SarasGambit
Comment Reply Start Topic
Report