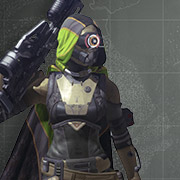 Mandalorian16_1
(shortly after the events on Io in a small forest not far from where Cupun died) "Got everyone here." Gently sets a corps down in a recently dug grave. "Got your whole gang here Cupun, there's you, Kim, Marcella, and Lyra, there ghosts as well." Steps back and surveys the entire scene which looks to similar to one he doesn't want to see anywhere but in a memory "best not to dwell in the past" picks up a cleaned pulse rifle off the bed of my transport truck and walks over to Cupun's grave "I can't give you your rifle back but I'll give you this one." puts the rifle down at his side and checks each grave to make sure I didn't miss anything then begins filling in the graves (Several minutes later) Tosses shovel to the side when my ghost appears next to me "I feel like something should be said" "Like what?" "I don't really know, maybe something poetic but I can't think of anything." "Agreed, but I think the dead have had their fill of words" with that I grab the shovel and stows it in the truck then leaves. [spoiler]thought I'd do something nice for Cupun and his team (since the majority of my posts we're as an interloper trying to get Cupun out of trouble or at least wasn't against him)[/spoiler]
English
Comment Reply Start Topic
Report