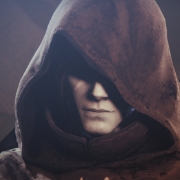 The Darkness Caused the Simulant Future, not the Vex

The 9th Prophecy weapon's description is as follows: "A sacred eye that speaks in lies—upending futures in its path. The way before us to the skies shall see itself in ancient wrath." "I've misplaced Osiris again," Sagira told a Goblin. The Goblin, being a Goblin, shot at her. She dodged with a sigh, and continued through the Forest. "If I was Osiris, where would I go to celebrate Panoptes becoming scrap metal?" The answer, when Sagira finally tracked him down, surprised her. Osiris hovered, cross-legged, at the center of a ruined Lighthouse. A dead sun loomed in the lightless sky. Arrayed on the ground below to the horizon, yellow Vex eyes pierced the gloom. Sagira zoomed straight to Osiris's side. "I thought we averted this future!” Eyes closed, Osiris shook his head. “Many equations lead to this answer.” A sound like a drumbeat, but with the impact of an earthquake, shook the Lighthouse. Sagira darted through the crumbling chamber. "What do we do?" Another bone-rattling drumbeat kicked up clouds of dust. Osiris floated to his feet. "We start over." BOOM. Through the window, a shadow eclipsed the Vex eyes. "But first," he said. "You'll have to rez me again, old friend." Osiris encountered some kind of dark force on Mercury - implied to be massive in scale. It's strongly implied to be the Darkness. We were completely wrong the whole time. The Vex weren't simulating a future that they caused, but one that they resided in - one that was caused by the Darkness itself. If the implications are correct, the Darkness is what shorted out the sun and turned Mercury into a dark world.
English
#lore #destiny2
Comment Reply Start Topic
Report