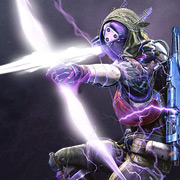 This topic was originally about the twilight garrison not changing colors but now I see this is a much bigger problem although the amount is very few some exotic armors do not match with shaders. From all these armor exotics in TTK i was expecting TG would change colors but it doesn't I have found no shader that matches My Gari. Anyone found a shader that matches it? Edit 1: going suggestions for twilight garrison are Wolfscurse judgement cast (these two match wonderfully)Vena Cava surf breaker shimmer glowhoo(crotas end hard mode loot drop for all you people who did not do dark bellow) and Arctic proxy. Edit 1 part 2:this topic is now also a petition for all armor pieces class items and exotics alike to be changed by shaders it is stupid that we must find a shader to match an exotic instead of the exotic matching the shader same for cloaks. WOLFS WOOD IS [b][i] IMPOSSIBLE[/i][/b] TO MATCH UNLESS YOU CATER TO THE GREEN! Edit 2: Lets keep this thread going! Maybe we can get a Bungie member to see this!(even if it doesn't change they know we want it ) Edit:3If you think of a suggestion for ANY armor piece that doesn't match with most shaders don't feel afraid to say what it is and post some shaders you have found to go with it! The ongoing ideas for the solution to cosmetic problems so far. 1.Transmog. 2.Shaders work on all items exotic or not 2. Option in the armor to Turn on/off armor shaders.
English
#feedback #Doit #transmog #communitywishlist #exoticshaderchanging
Comment Reply Start Topic
Report