Jun 18, 2020 - A_dmg04
This Week At Bungie, we’re streaming… for the kids!
Hello there. If you’re reading this right at the moment of publication, then congratulations. You’ve just hit the $100k benchmark for our slot on the GCX stream! If you have no idea what I’m talking about, let’s break it down.
Between 9 AM and 1 PM PDT today, we’re live on the GCX Marathon Charity Stream, raising funds for St. Jude Children’s Research Hospital to help support children in need. Your donations help families around the world by contributing to the research and treatment of cancer. While you can take pride in helping by donating a few dollars, we also have a variety of incentives to provide some additional motivations. 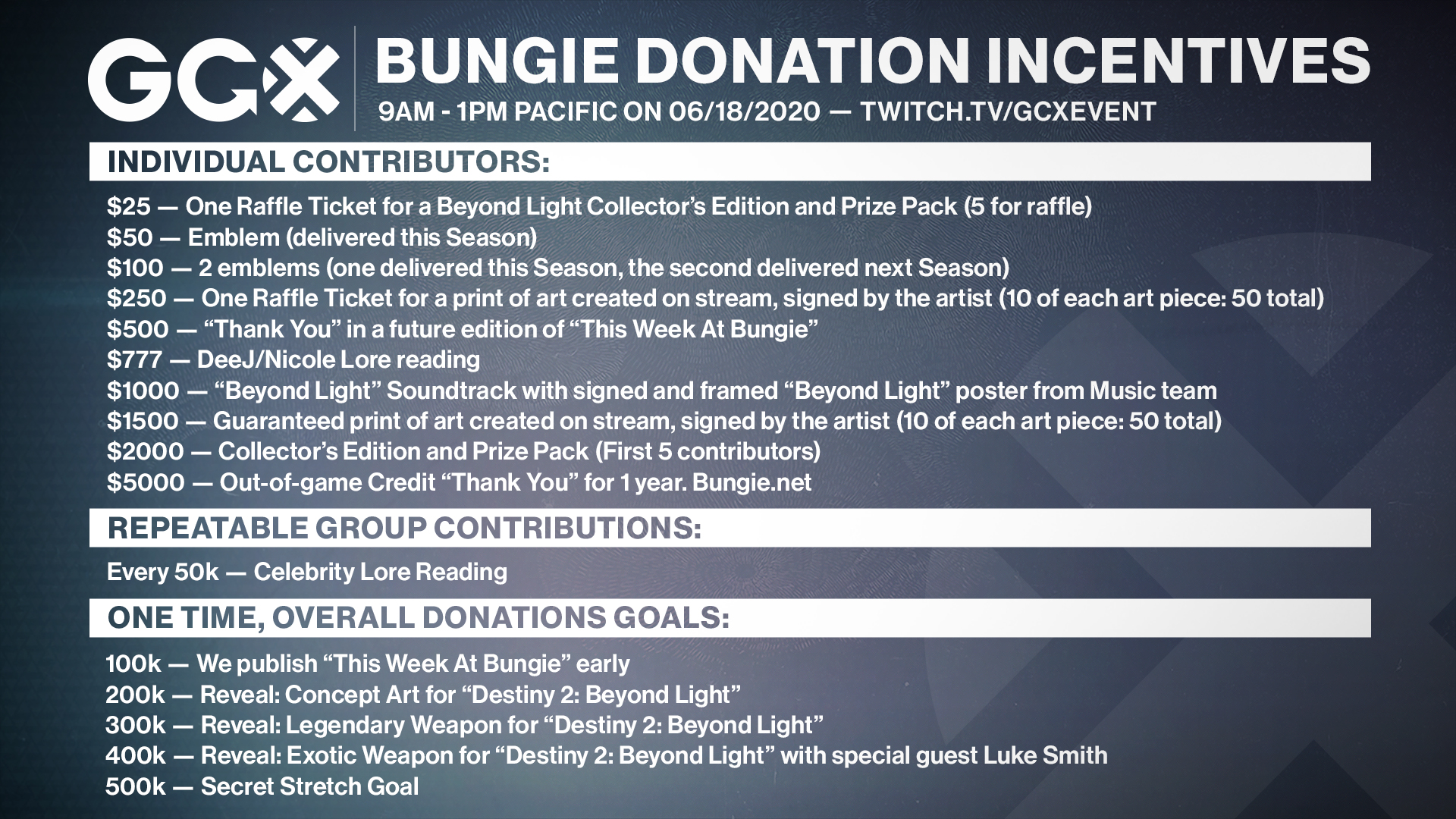 If you haven’t donated, this is your chance! And if you missed our live stream, no worries – this initiative is being supported by many in the gaming community. Jump in and check it out.

Another Patch in the Pipe

This week has been a pretty active one in terms of patches. On Monday, a change was made to require players to re-queue for Forges in hopes of removing idle players from the activity. Tuesday, we had some fixes go live for energy and Umbral Engrams. Today, Hotfix 2.9.0.1 went live with fixes to Sprint Cancelling, the Lighthouse, and more. But we aren’t done yet.
Hotfix 2.9.0.2 is planned for next week. We’re in the process of finishing up some testing passes, but here are a few things you can expect:

We have a laundry list of other issues that the team is currently investigating. Our next update is planned for early July, so stay tuned for another Patch Note Preview in the coming weeks.

Alongside Season of Arrivals, we announced Destiny 2: Beyond Light! At the kickoff, we saw some confusion on pre-order bonuses, so we’d like to take a moment to set the record straight.
For all information regarding Destiny 2: Beyond Light pre-orders, head over to this Help Article. Additionally, if you’re having any issues pre-ordering through our platform partners, be sure to contact their support resources as well.

You may see Player Support team members on the #Help forums frequently, but they’re constantly fighting the good fight behind the scenes. Since well before launch, they’ve been helping the teams triage issues, representing your voices in the meetings that matter most. This last week has been no different, as they’ve been tackling each newly discovered issue from Season of Arrivals.
This is their report.

Next Tuesday, we will release Hotfix 2.9.0.2. More details will be provided soon.
KNOWN ISSUES
While we continue investigating various known issues, here is a list of the latest issues that were reported to us in our #Help Forum:

If I had a dollar for every time my Guardians have fallen to the Architects, I’d have no less than two thousand of them. This week’s winner has been keeping track of some hilarious defeats. Take a moment and be thankful that you aren’t them.
Movie of the Week: Guardian Down

If you’re hunting a MOTW emblem, make sure to submit your video to the Creations Page on Bungie.net. Link the Bungie.net accounts of anyone who helped in the video description, or we won’t know where to send your prize!
Thanks for stopping by for another week of Destiny 2 and Bungie news. Releasing TWAB’s early is always a fun time, especially when raising money for charity on the GCX stream. By the time you’re reading this, DeeJ and Nicole may have had a few lore readings. I may have eaten a piece of bread or two. Cozmo may have lost his mind, again. Who knows, maybe we’ve already unveiled some Destiny 2: Beyond Light concept art. Either way, it’s all for the kids.
Oh, and before we forget! If you all somehow reach 500 thousand dollars in donations, Cozmo and I are going to get matching tattoos. I have no doubts you have it in you, but will you hit the mark within our four hour block? You've been challenged in the ways of old.
See you in chat.
Cheers,
-Dmg04