Apr 16, 2020 - A_dmg04
This week at Bungie, we prepare for rivalry.
Announced earlier this morning, Guardian Games is fast on approach. Beginning April 21 at 10 AM PDT, the games begin. Titans, Hunters, and Warlocks will compete to prove which class is the most dedicated in Destiny 2.
Your entry into the competition begins with a visit to Eva Levante. Each Guardian will receive a class item to adorn while taking part in competition. Bronze, silver, and gold medals will be available to earn daily, each of which will focus on specific game modes. To earn medals, equip your new class item, defeat enemies, pick up laurels on the battlefield, and advance your quest for the medals you desire. 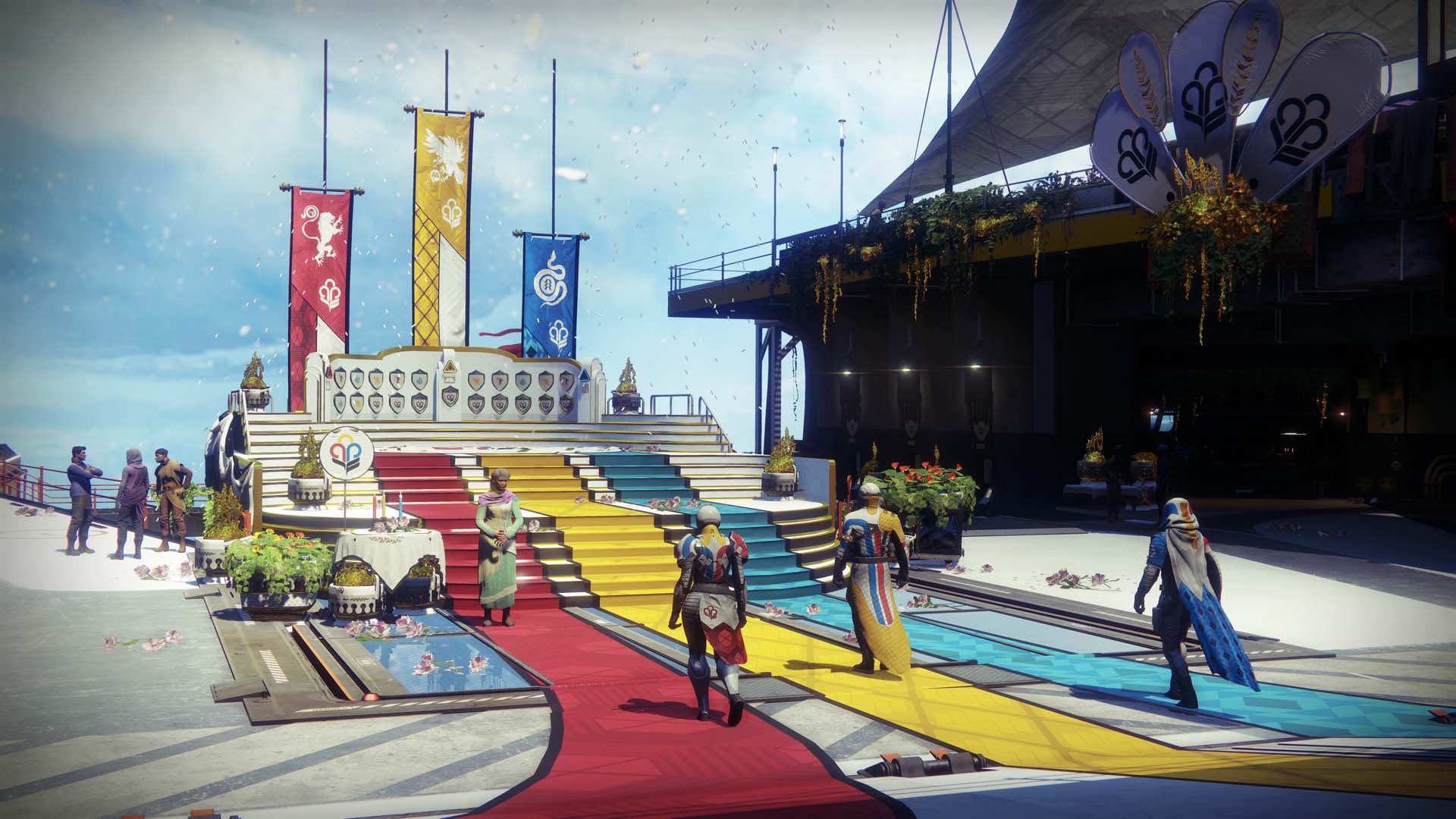 We fully acknowledge that class populations are a little lopsided. Hunters are so fabulous with their capes that there are indeed more of them than Warlocks or Titans. To help offset this (so Hunters don’t steal the show every day), medals will be weighted slightly per class to maintain an even playing field. We aren’t fiddling with the numbers to force wins on alternate classes – Hunters could still take this entire thing if they put enough effort in.
Now, about those class items. At daily reset, your Cloak, Mark, or Bond will update to reflect what placement your team has taken. As an example, if Titans took the “W” for day one, their Mark will update with a wonderful gold sigil. With Warlocks in second and Hunters in third, their class items would be updated to feature silver and bronze, respectively. 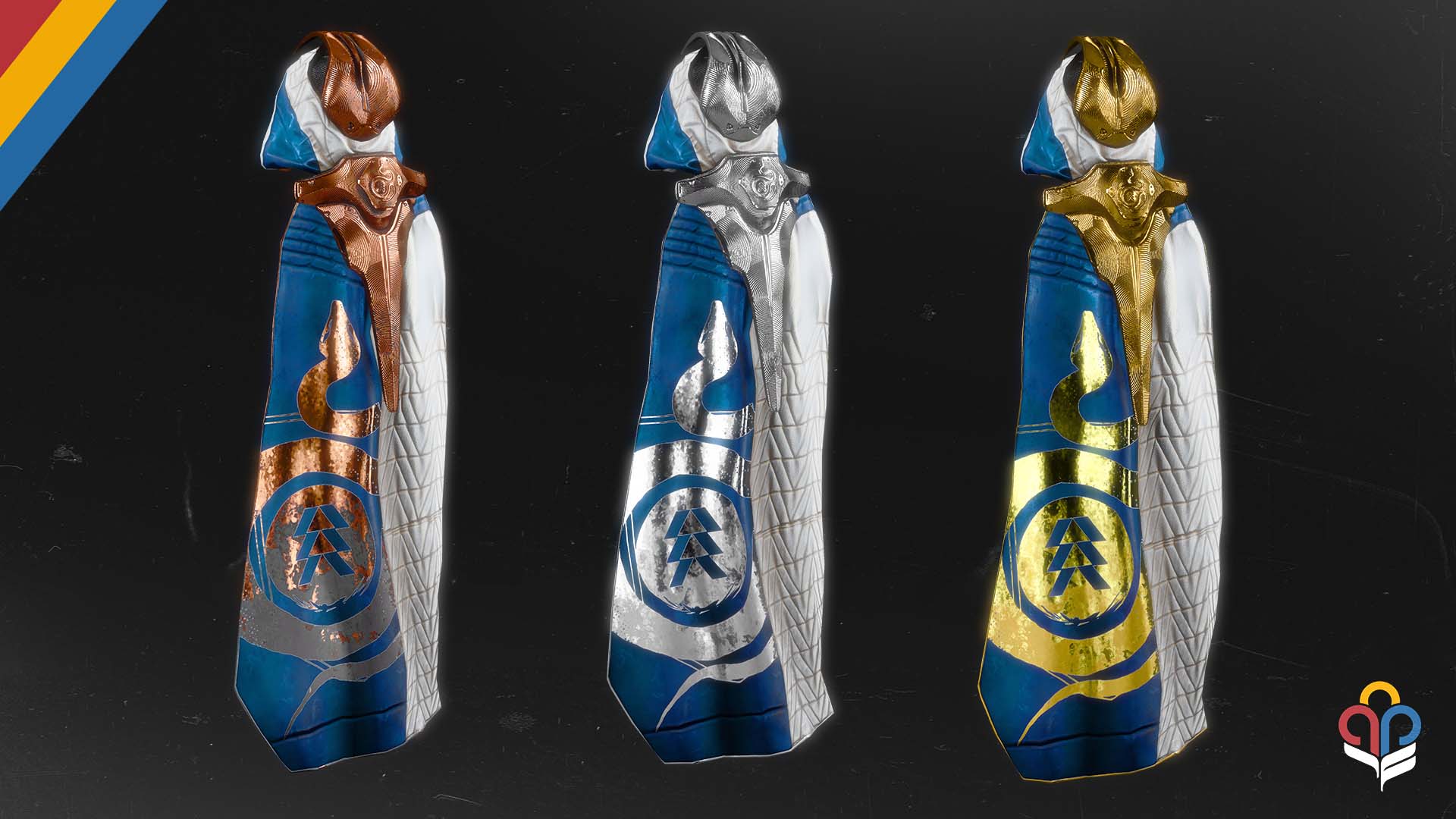 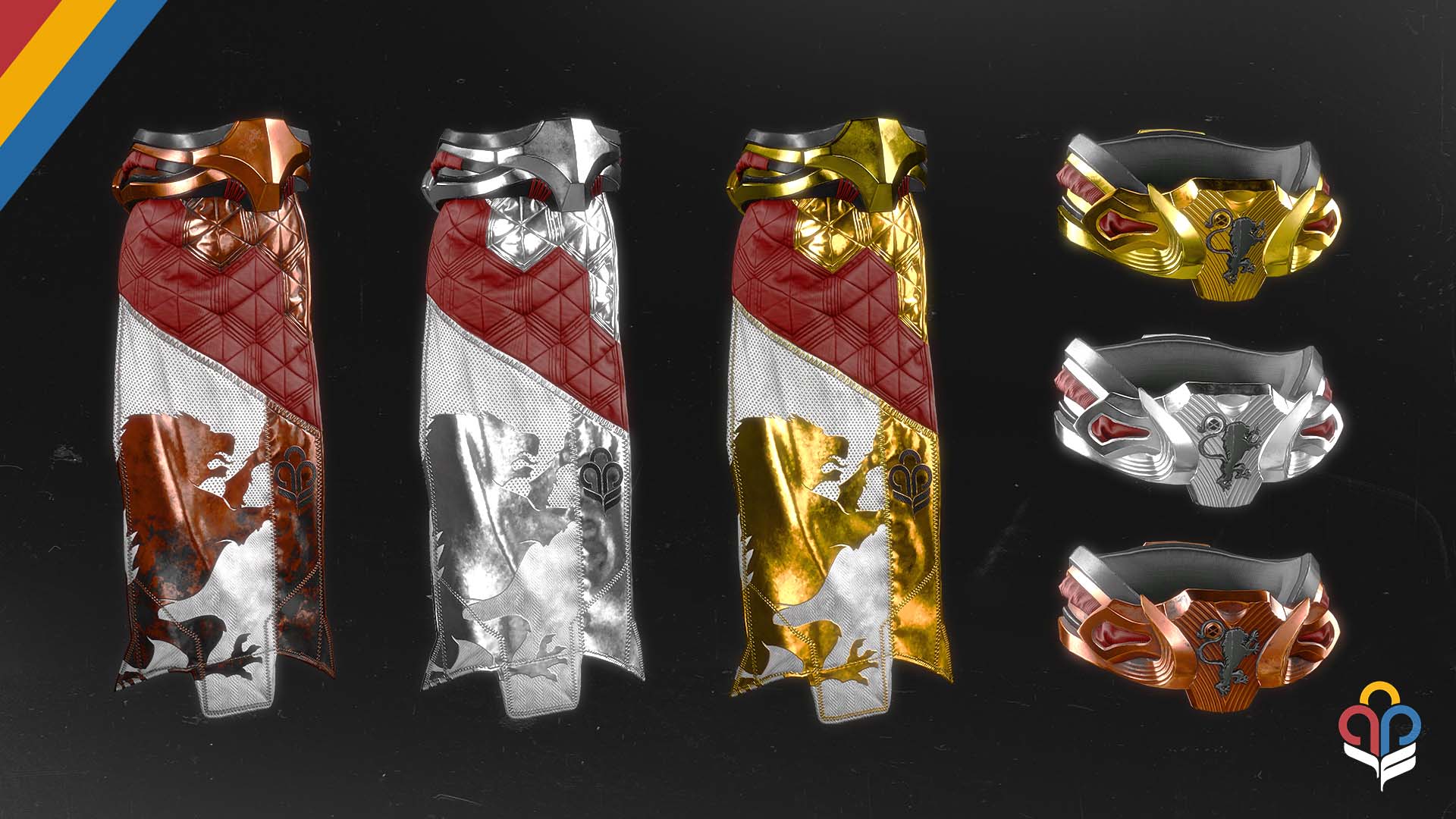 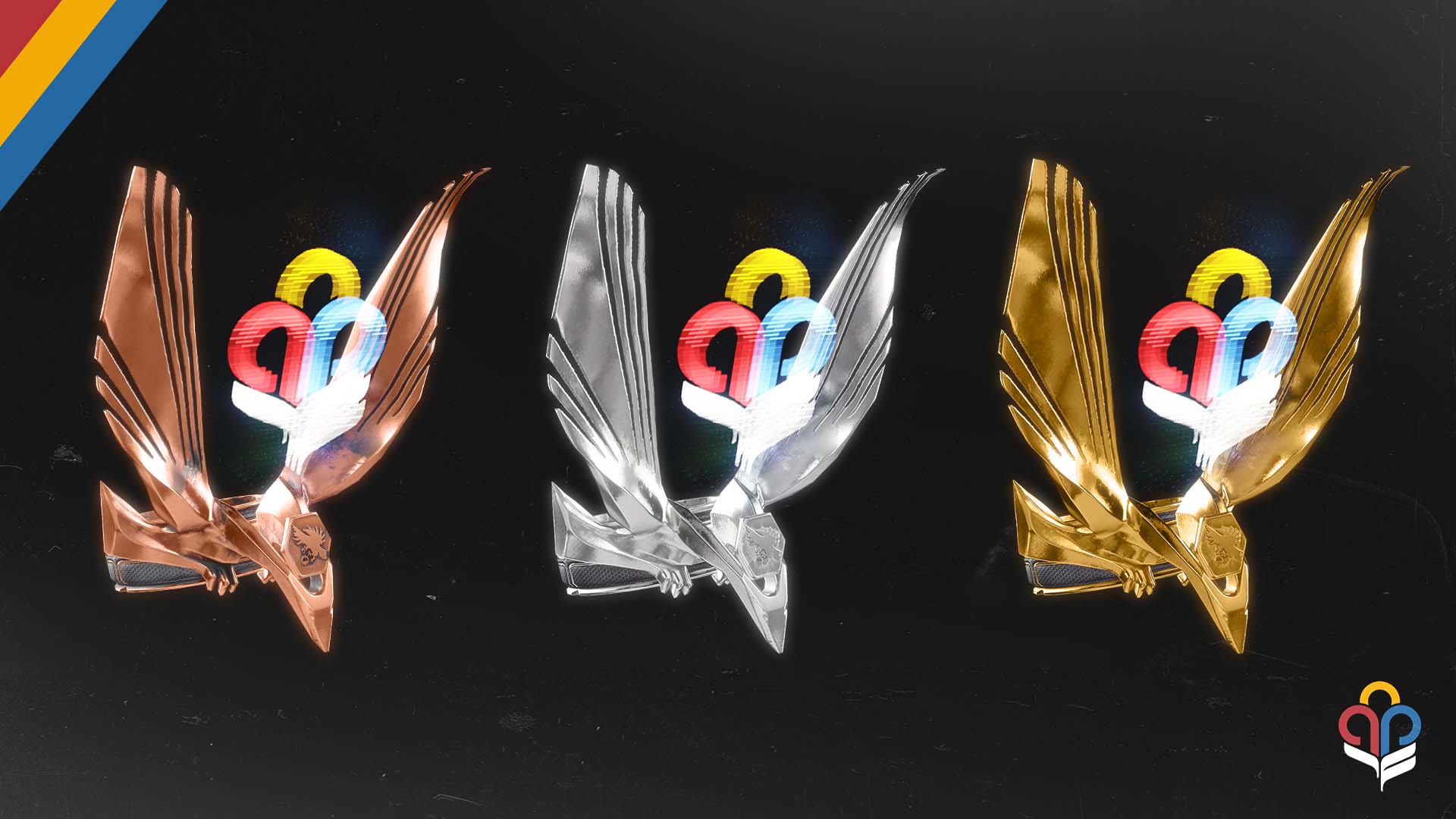 So, what’s the ultimate prize? At the end of the event, your daily placements will be combined for a final score. Depending on your team’s standings, your class items will be locked to their respective placements for the remainder of the year.
If you’re looking for more ways to represent your class, Eva has you covered. Each week, you’ll be offered a free quest to earn an Exotic Ghost Shell, one themed to each Guardian class. Complete this quest every week to collect all three! 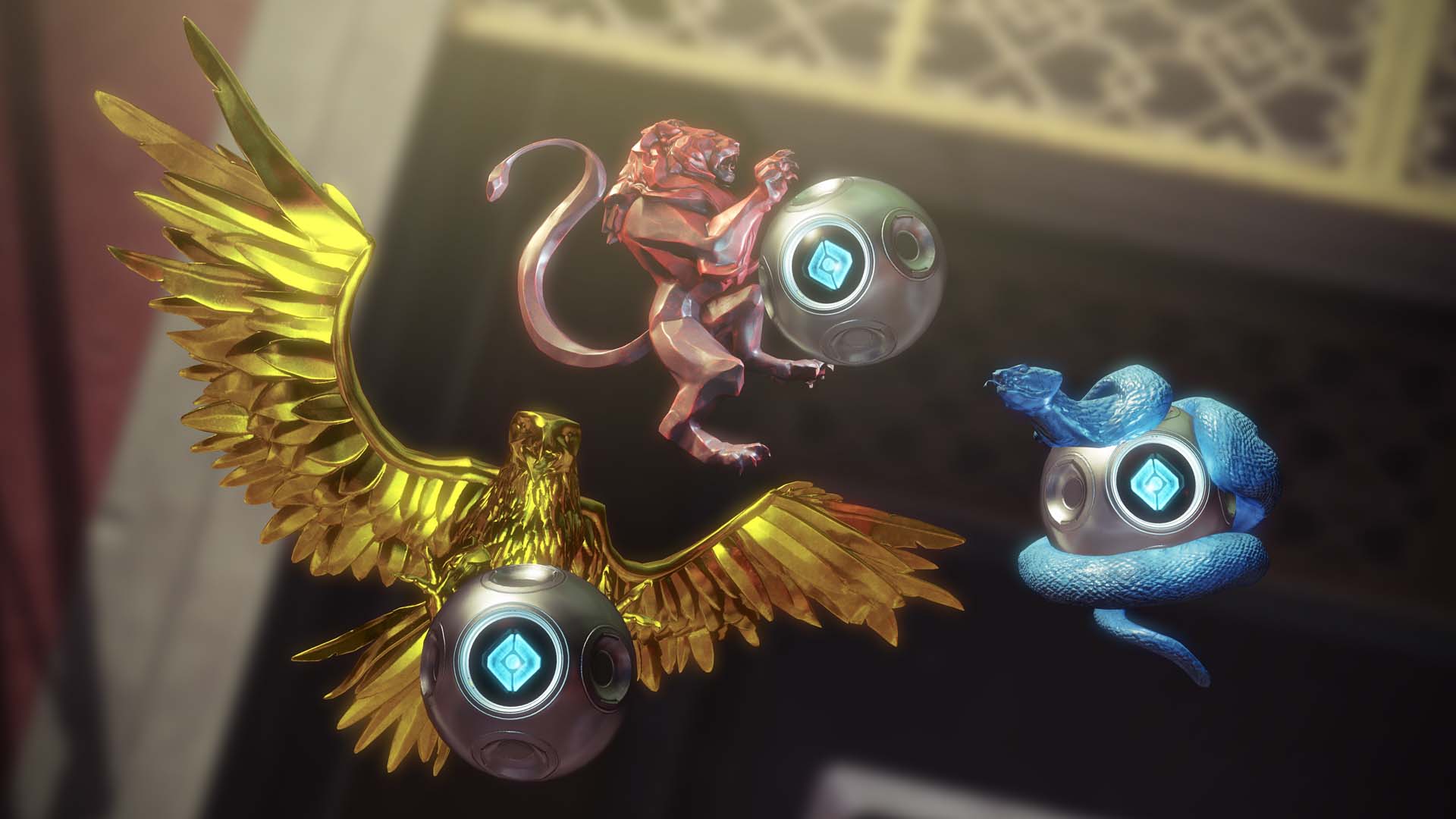 Additionally, a new Exotic Machine Gun will become available during this event. We look forward to seeing what mayhem this tool of destruction will inspire when you get it in your hands. 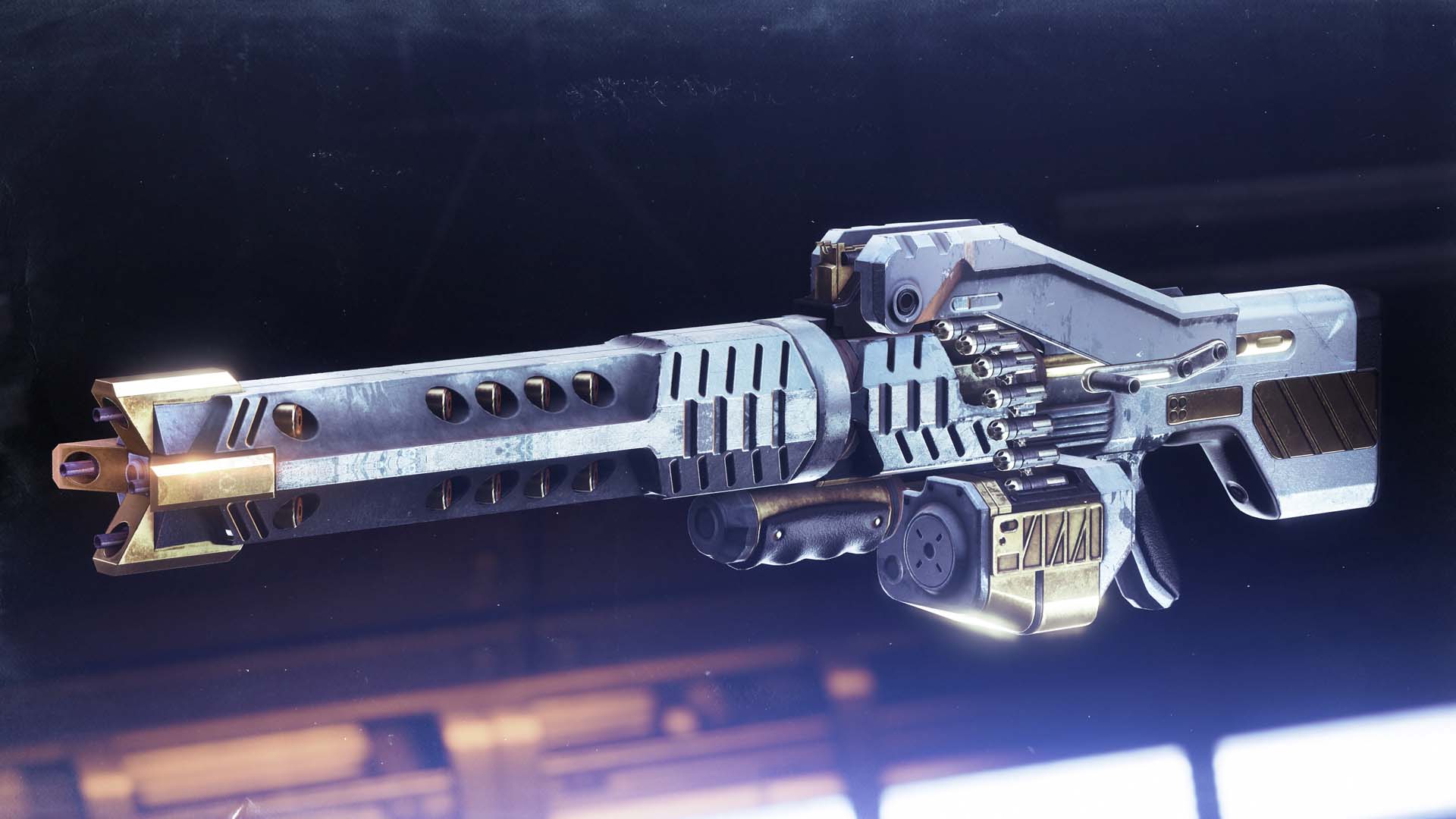 Eververse will also have some items in store for the event. A single Finisher will be available for Silver only, while all other items may be purchased with Bright Dust as they appear on the storefront. As a note, all Guardian Games weekly/repeatable bounties will grant Bright Dust to match previous Seasonal events. 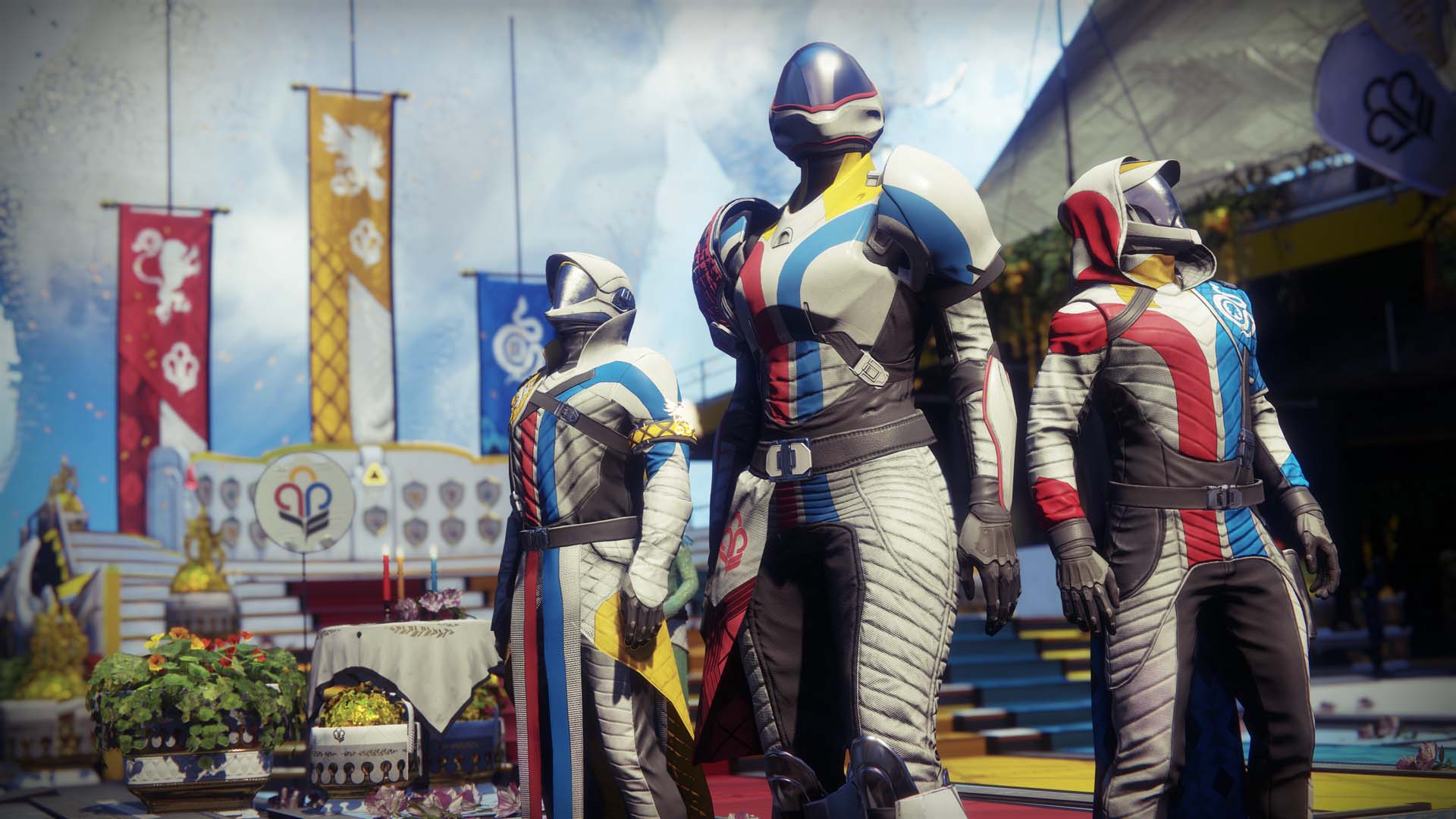 Guardian Games begins upon the weekly reset – this Tuesday at 10 AM PDT. Make sure to launch your game a little early to grab the required Update 2.8.1. More on that in the Player Support Report below!

At the time of writing this article, the Guardian’s Heart Charity Initiative has generated over $450,000 for relief efforts in the face of the COVID-19 pandemic.
For those that may not be up to speed, for this fundraising effort we’ve partnered with Direct Relief, who will work with a network of providers across the globe to deliver the supplies that healthcare workers need. This includes basic personal protective equipment, including gloves, masks, gowns, and face shields. The hospitals where they work will also receive food covers, prescription medication, portable oxygen concentrators, ventilators, and other intensive care unit equipment.
Any donation of $20 or more will earn you the exclusive Guardian’s Heart emblem. As a quick note, these will be distributed by Bungie within a week of your donation. Keep an eye out, as the email may be filtered to promotional or even spam folders in your inbox.
To help raise awareness and share some of the community action, we’re hosting a series of Bungie Bounties for as long as this fundraising initiative lasts. This isn’t restricted to North American Guardians, mind you. This is a worldwide effort, so we’ll naturally have some international bounties for you to chase. We’re getting some final details together for the full calendar. Stay tuned to find out who you’ll be chasing over the next week.
We’re also partnering with Guardians around the world to host a variety of Destiny streams that feature raid challenges, dungeon runs, and more. If you’d like to show your support and host a stream for this initiative, get in touch with us.
Stay tuned to @Bungie for announcements.

It seems that Guardian Games kicked off a little early for some Exotic items in our game, in terms of competition. Telesto, Winter’s Guile, and Wormgod Caress are eyeing the top spot for “biggest problem child” in our sandbox. The Destiny Player Support team has an update on their standings.
This is their report.

LET THE GAMES BEGIN
Next week, Guardian Games kicks off with the release of Destiny 2 Update 2.8.1. Please see below for the rollout timeline.

BEETLE ERRORS
During the team’s investigation into BEETLE errors, it was discovered that players who were in Towers with more than 13 people would get BEETLE errors at a higher rate. As a temporary workaround, we have changed the number of players who can be in the Tower from 26 to 12 until a more permanent fix can be deployed.
UPCOMING RESOLVED ISSUES
Below is a list of issues that will be resolved when Guardian Games and Update 2.8.1 becomes available on April 21:

With more time at home, we’re finding ourselves able to watch a few more movies. Our daily binges of Netflix can only carry us so far, but thankfully we have some awesome Destiny content to watch on the Creations page.
Movie of the Week:  Fourth Horseman Rides Again

If you’re a winner, make sure that your Bungie.net profile (and any profile of someone that contributed) is included in the description of your video. Without that key piece of information, we’re unable to slap that rightfully deserved emblem on your collections tab.
So, we come to a close on another TWAB but we understand that there are some topics that weren’t covered on here that you may have strong desire to know more about. Eververse, Trials improvements, our plans to address FOMO, tackling the bounty problem, and more. There are also questions like “What about feeling like players can’t play their way? What about Ritual weapons, anti-cheat improvements, etc?” .
We’ve been having frequent syncs to talk through these issues and more. Many of them require a long-term plan with short-term mitigation to help ease the pain. The last thing we want to do is over-commit to changes that ultimately may be reversed, or sign the team up for work that leads to crunch. We don’t want to make promises we know we can’t keep, so to speak.
Over the next few weeks, we hope to solidify some plans and get them communicated out. We’re looking at what can be accomplished in Season 11, which is coming much faster than many of us can believe. Some topics will be tackled in Season 12, as they’ll require larger scale systematic changes.
Thank you again to everyone that’s been giving feedback on Destiny over the years. This train never stops, and we hope to share our next steps with you soon. Until next time, we’ll see you out there in the wild.
Cheers,
-dmg04