Apr 2, 2020 - A_dmg04
This week at Bungie, we look towards Io.
So, you’re a few weeks into your seasonal journey. You’ve cleared the EDZ Bunker of Fallen, and have been taking the Hive to task on the Moon. You’ve reclaimed The Fourth Horseman, and maybe even completed its catalyst. So, what’s next? 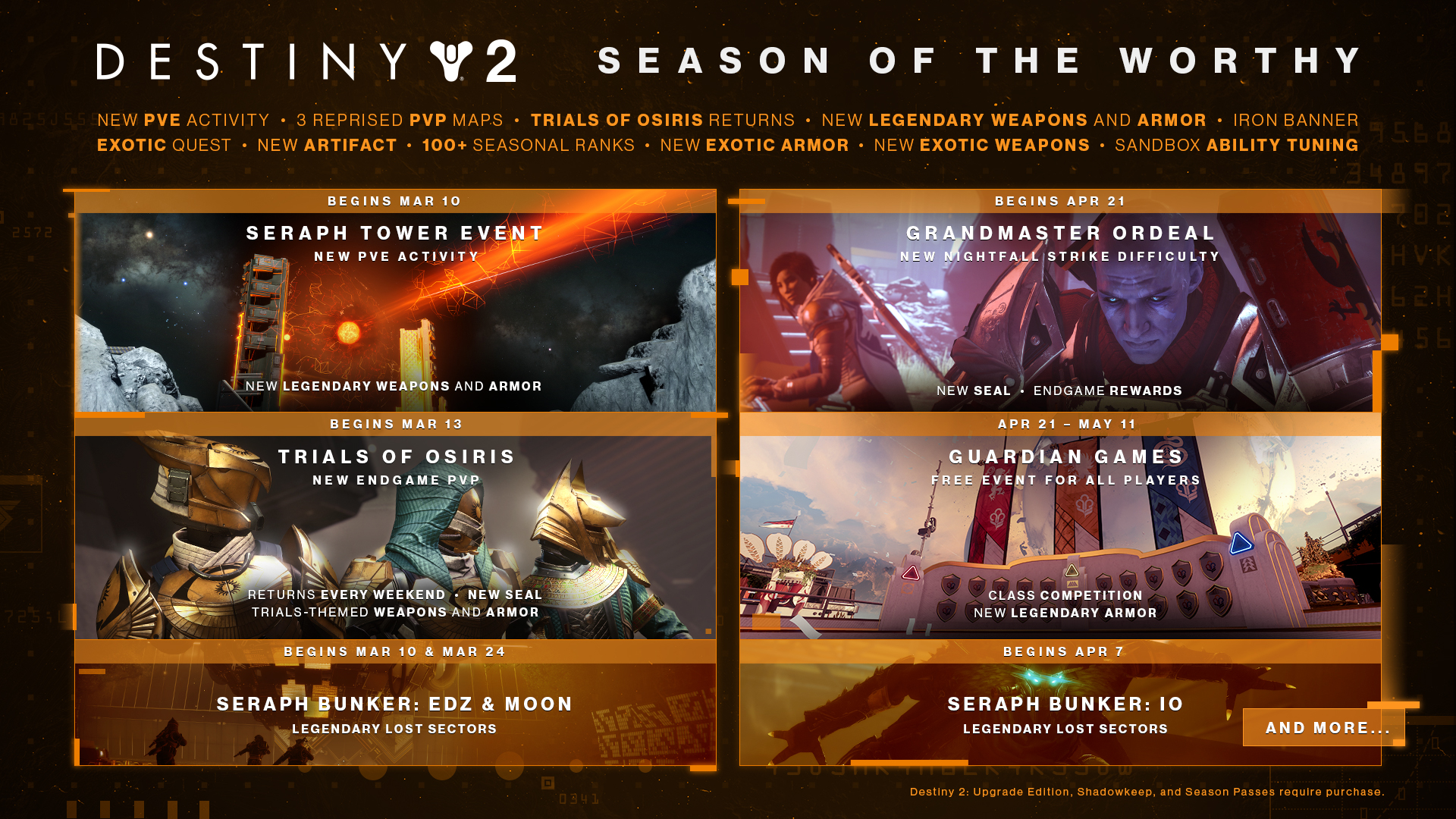 Tuesday, the final Seraph bunker will open on Io. New Seraph weapons and seasonal mods enter the mix, giving you more options to build your monster-killing machine. Later in the month, Guardian Games will kick off some good old-fashioned Guardian rivalry, accompanied by the Grandmaster Nightfall difficulty.
This week, we’ll be parsing through some feedback we’ve been seeing since the season launched, and discussing next steps for emblem stat trackers.

Over the last few weeks, we’ve been watching the conversation about Season of the Worthy, and more specifically Trials of Osiris. We wanted to walk through the topics we’ve been exploring and give some basic thoughts on what we’d like to approach in the future. Some items below may be addressed in the coming weeks, but other may take a season or more to tackle. We’re having meetings and discussions daily to determine the best course of action. In the meantime, it’s important to us that you know your voices are heard.
Card Rewards
We’ve been discussing feedback around a lack of incentive for players to go Flawless. We understand that some players have found the first few games to be more lucrative, which we’d love to shift to the later games. Early card token farming, as some would call it, is something that we are very interested in solving. We want to make sure that every Destiny player who wants to play Trials has something to show for it at the end of a weekend.
Additionally, we’ve seen feedback that the Flawless chest isn’t comparable the rewards associated with grinding out Nightfalls. This is something that we’d love to improve upon. There are quite a few ways we could approach this, and we’re currently discussing what would be the best for Trials in the long run.
Disconnections
We’ve been investigating an issue that prevented us from enabling rejoin options when Trials first launched. The short version: A player’s score could reset if that player left and rejoins the match. Since we’ve resolved this issue, we are currently planning to enable rejoin in Update 2.8.1.
Additionally, our teams are continuing to investigate the rise in error codes since the launch of the season. This is one of our top priorities, and we’ve made some progress in identifying the issue. What’s left is developing a fix and testing it. We want to take the appropriate time here to avoid introducing any further issues into the game.
Fair Play
We’ve seen reports from players that have encountered cheaters in Trials over the last few weekends. What follows is a quick update on what we’ve been doing to improve your experience, and what we’re discussing internally for future improvements. To restate the note in the intro, some of these items may not be addressed for some time, as we’re in early conversations, but we wanted to give you an update of what’s going on behind the scenes here at Bungie.
Additionally, we wanted to give a few tips on information that helps us during our investigations when processing reports from the “Report Suspected Cheating” contact form. Important Note: Do NOT post any of this information publicly. Not on Reddit. Not on the Bungie forums. This information should only go in this specific form. Here’s the information we are looking for:
And if possible:
I know that some of you out there may find the statement of “We’re listening!” to be a repetitive cliché of community management, but the first step toward taking action is to listen. We’ve been collecting your feedback and looking to fully understand the root of the perceived issues that are being discussed by players in the wild. Your voice is important to us, and helps us as we walk the path to what’s next in Destiny 2. We’ll be sure to keep you updated on our plans as they become more concrete, and we thank you for your continued feedback on the game.
Speaking of the future, let’s talk about Stat Trackers.

At the beginning of the season, changes were introduced to stat trackers to give players more ways to express their achievements in Destiny 2. We introduced weekly Seasonal and Lifetime trackers, and these were completely optional to those who might want to have a clean emblem. With this overhaul, previously featured trackers were removed. Players were quick to highlight this as a pain point, which we’re eager to address. This week, we have a list of the stats we’ll be bringing back in Update 2.8.1, which is coming later this month.
We understand that there may be a few stats that are still not present that you’re interested in returning. To be clear, we have a hard cap on how many stats can be listed on emblems, so we want to make sure we have room to grow in the future. Please continue to give feedback on what you’d like to see, and we’ll keep you in the know of what our plans are.

Under the Magnifying Glass

No stone is left unturned when Destiny Player Support is on the case. When issues begin to trend, they disperse troubleshooting articles, but also dig deep to diagnose the issues.
This is their report.

These issues were not fixed in 2.8.0.2. Fixes for these issues will be available with a later update.
CURRENT KNOWN ISSUES
While we continue investigating various known issues, here’s a list of the latest issues that were reported to us in our #Help Forum:

Look, I’m biased towards Omolon weapons. Hard Light was one of my first Exotics back when Destiny first launched, and it’s fun to see it take the spotlight for a season. That said, Auto Rifles in general are pretty hot right now. This week’s winner takes Suros for a spin, making some great plays in the Crucible.
Movie of the Week: The Suros Simulation

If you’d like a chance at a fancy new emblem, cook up a creation and post it over on Bungie.net.
The days and weeks are beginning to meld together. As our local weather station put it, we’ve entered the month of “Maprilay.” The sun continues to rise and fall, but it’s becoming a little difficult to keep track of what day it is. Thankfully, we have Destiny 2 to bring us together during these times of isolation. Sometimes, the only thing I have to remind me of what day of the week we are living is this every-Thursday mainstay blog article.
I’d like to take a moment to highlight the Essential Workers of the world. While we’re all in this together, we couldn’t do it without you. You are all Legends in our eyes. You’re helping to keep the world spinning in times of crisis, and we cannot thank you enough for your efforts.
We’re cooking up some initiatives on our side to amplify the good in this world. More on that soon…
Much love,
Dmg04