Jun 27, 2013 - DeeJ
The best thing about creating an entirely new universe as the setting for a game is that there are no rules. Jason Jones said it himself: “The limitations are our imagination – our ability to conceive these ideas.” Ever since we revealed the brave new world of Destiny, artists from within the Bungie Community have been joining us at the easel to express themselves through this prism of mythic science fiction that we’ve been embracing.
Kyle Swenarain, aslo known as Zukai, has his own ideas for how the heroes of our upcoming adventure will look, as well as how they’ll evolve as they become more powerful. We first noticed his art on the subReddit where would-be Guardians are building their own tower. At the same time, his work bubbled up on our own #Destiny forum. Since our concepts were the focus of his paintings, we decided to pay him some equal time, and make him the focus of our community. 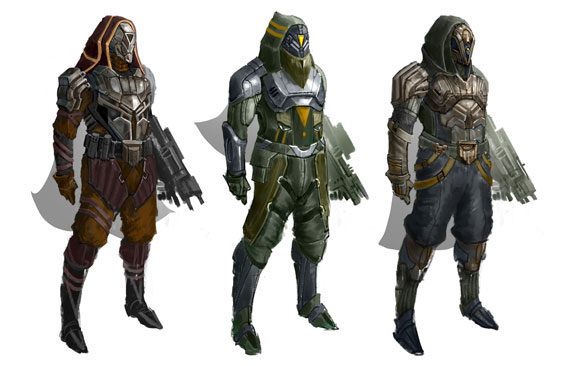 It’s obvious you’ve got some skill with the brush. Of all the things you could paint, why the Guardians from the world of Destiny?

KS: When Destiny was first announced I became interested, but it wasn't until seeing the progression of development and art during the GDC seminar that I became hooked. I was really excited to see how Destiny evolved into the universe we know of today, especially the development of the Guardians and their foes. I then waited for E3. After watching the gameplay, I just couldn't contain myself. The only way I could satiate my hunger for more Destiny was to paint out concepts of my own.

You’ve put a lot of thought into what it might be like to customize the player classes in Destiny.  When the time comes to play, which set of armor will you use to shield yourself from great danger?

KS: The Titan will definitely be my class of choice. I'm most impressed with the Titan armor design, and their history of defending the Wall. Their bulkiness implies a tank, or a more in-your-face role, so you'll find me running around with the most badass armor I can find, charging right at the enemy. 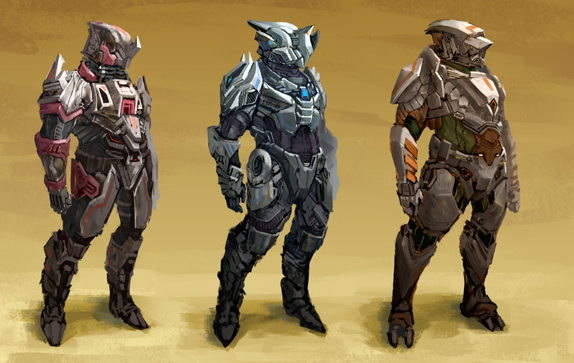 Great answer! Love your early grasp of Destiny universe trivia. Despite the fact that you’ve proclaimed your loyalty to the Titans, do we still get to see your Warlocks?

KS: I just started working on them last night, so hopefully soon. In contrast to the first sets of concepts I'm trying to put a bit more effort into nailing down the "feel" of Destiny in the armor designs. I got quite a few comments on the Titan Armor Concepts explaining how my designs slightly veered away from what was expected, so this time around I'm doing my best to get it right.

So now you know what it’s like to design under a microscope wielded by fiercely passionate gamers. Tell us about your other experiences as an artist. Any formal schooling?

KS: I started using Photoshop ten years ago, following online tutorials to make cheesy fire effects and what not. It wasn't until 2008, when I graduated high school, that I got a drawing tablet. From then on, I digitally painted everything from fan art to forum signatures. I ended up going to an art school for three years and studied all the fundamentals, such as color theory, perspective, rendering, anatomy, etc. I just graduated this spring with a B.A. in Digital Art and Animation, and am currently working part-time.

Congratulations! What are your long-term aspirations? Describe your dream job as a creator of art.

KS: To be honest, my dream job is simply to do paintings like these for games or film. Currently, I work at a mobile gaming company on contract, but I'd love to experience freelance or be able to work with a concept team in a studio. I'm constantly inspired by works from amazing concept artists such as Kekai Kotaki, Jaime Jones, Ryan Demita, Anthony Jones, Dave Rapoza and many more. To work with people like them, and more importantly, learn from them, would be a dream come true.

Lastly, I just wanted to give a shout out to the community for so much support and to Bungie for the feature.

Hey, man. That’s my job! I give the shout outs around here, and then I tell people to keep an eye on your blog so that they can enjoy the Warlock paintings then you’re ready.
To echo what he said: Thank you, Bungie Community, for supporting your fellow artists. You can spot them in many places across the wilds of the Internet, expanding their own imaginations to fill the raw space we’re creating. We hope you keep lending your brushstrokes to ours. The world we’re building is one that we’ll soon share, and it’s exciting to see you making your imaginations at home there before we can even finish building it.