Apr 19, 2013 - DeeJ
Every week, a current of tweets, status updates, forum posts, interviews, smoke signals, signal flags, and private messages leap from this keyboard onto the Internet in the service of Bungie’s voice to the world.{{more}} These words you're reading right now can be the hardest to submit to that stream – the introduction to a Mail Sack. It takes enormous restraint to not recount the emails I receive all week about the delicious details that are being prepared for the delight of our community.
We’re gathering the next patch of rapids through which you'll paddle. You’re holding your breath to shoot them. We're holding our breath to release the floodgates. During this lull, the best we can do is to keep one another company, and enjoy the calmer waters as best we can.
To come up for air, we can only open the sack.

Reaganite  After E3, can we expect things to heat up a bit? More specifically, will the info roll out ever be as slow as it is now after E3?
Translation: Are we there yet?
Controlling this steady delivery of information is a delicate dance, indeed. We have a plan of attack, but there ain’t no way I’m making any public promises until we’re sure we can keep them. We can’t just hand you a programming guide and tell you to enjoy the show.
Besides, what would be the fun in that? We want to keep you on your toes - have you guessing where we might pop up next. This journey into the world of Destiny should have some element of suspense and surprise, like descending deeply into the dark caverns beneath an ancient buried city in search of treasure, adventure, and glory.
Starside Fei  Do the artists at Bungie work better on computers or with regular pencil and paper?
My best art appears on a white board, and most often receives comments like “What the hell is that supposed to be?” Fortunately, we can access a whole panel of artists, and mine them for details about their creative process.
I’m no artist either, but I am really good at staying inside the lines when I work with crayons.
Jay Thaler, Senior Engineer
I must admit I miss charcoal on paper the same way I miss nails on chalkboard.
Lorraine McLees, Senior Graphic Designer
Computers for sure! No messy fingers, you can’t run out of paint, puppet warp… ‘Nuff said.
Kevin Hart, Artist
To me, this question is really unanswerable. What is considered better is entirely objective. Luckily, we artists at Bungie can do art we’re passionate about and have had the good fortunes to have made careers out of it.
Pat Jandro, Senior Cinematic Designer
pawncrackers  Will there be any female protagonists in Destiny, and if so, when will we be seeing concept art of them?
If you’d like, you can be the female protagonist, like that Hunter on the left. She’s equal parts beauty and beast, and you’ll have the chance to be her, someday. 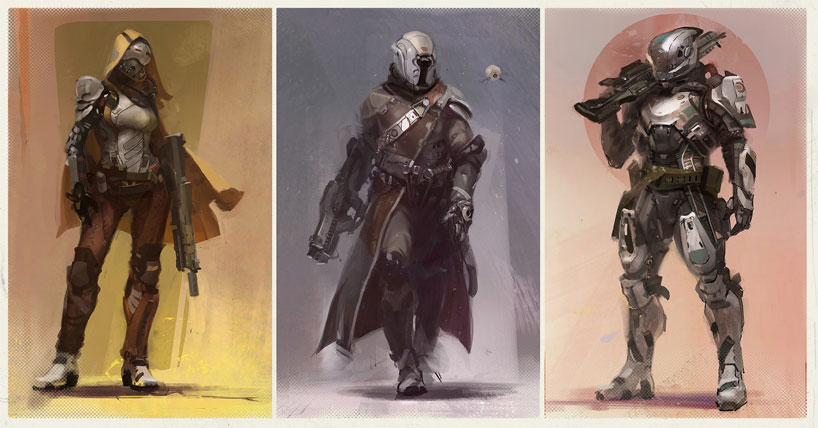