Oct 27, 2022 - A_dmg04
Before we dive in, please join us in sending Mara Junot (English voice of Ikora Rey) well wishes and hopes for a speedy recovery.

Could use some extra prayers today, family. Currently in the ER, about to be hospitalized. Docs found multiple clots in my lungs. SO incredibly grateful we found out before the flight we were scheduled to get on in just a few hours! 🙏🏾 All positive vibes welcomed.
TY, friends ❤️

This week at Bungie, we’re humming along to a Deep Stone Lullaby.

Did I scare you? Doubtful, as I’ve tried this trick in a TWAB before.
Happy Festival of the Lost, Guardians. As tradition, we’ll start with a quick recap of what’s going on in the wild. Headless Ones are roaming Lost Sectors on the hunt for Ghosts, but you’ve already taken up the task of cleaning house. Between a Voltshot roll on the Legendary Mechabre Sniper Rifle or some spicy perks on previous FOTL weapons (Kill Clip BrayTech Werewolf, anyone?), there’s some fun loot to earn, too! We’ve already seen a few gilded Ghost Writers in the Tower, and we can only hope they’re sharing some of the candy they’ve been earning. We’ve also been running some fun fashion and art contests for players. Towards the end of this article, you’ll see a few awesome creations from our players. Up first, let’s get a look at some fun costumes from #ThreadsofFright that players are wearing in-game:
Telesto 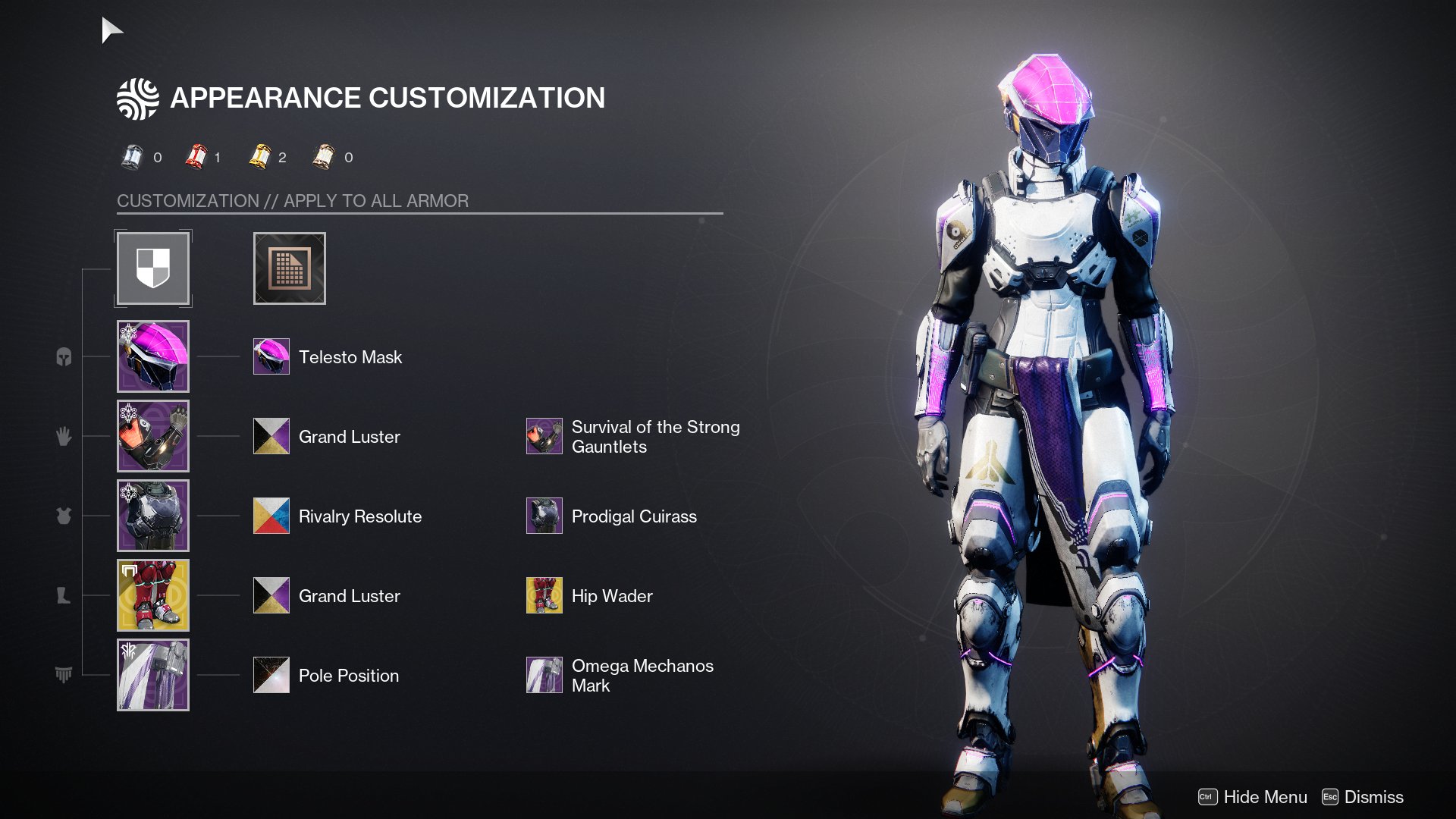 Created by: Kaida
The Dark Side

So, what’s on deck for the TWAB this week? Crafting's on the mind. We have some fun news on deck for next Season, and we’re looking at some long-term goals that the team is planning to execute for Lightfall. We’ll also be discussing some important information around Stadia and Cross Save, followed by Bungie Bounties and a Prime Rewards refresh.
Let’s get to it!

Since the addition of weekly featured Raids and Dungeons for pinnacle drops, we’ve seen more players engaging with a variety of raid activities in Destiny 2. While an increase in Power is always exciting, or even the fabled chance at a raid Exotic, we’re taking an opportunity next Season to make your return trips to Beyond Light’s Deep Stone Crypt even more enticing. Starting next season, Legendary Deep Stone Crypt weapons can be crafted! 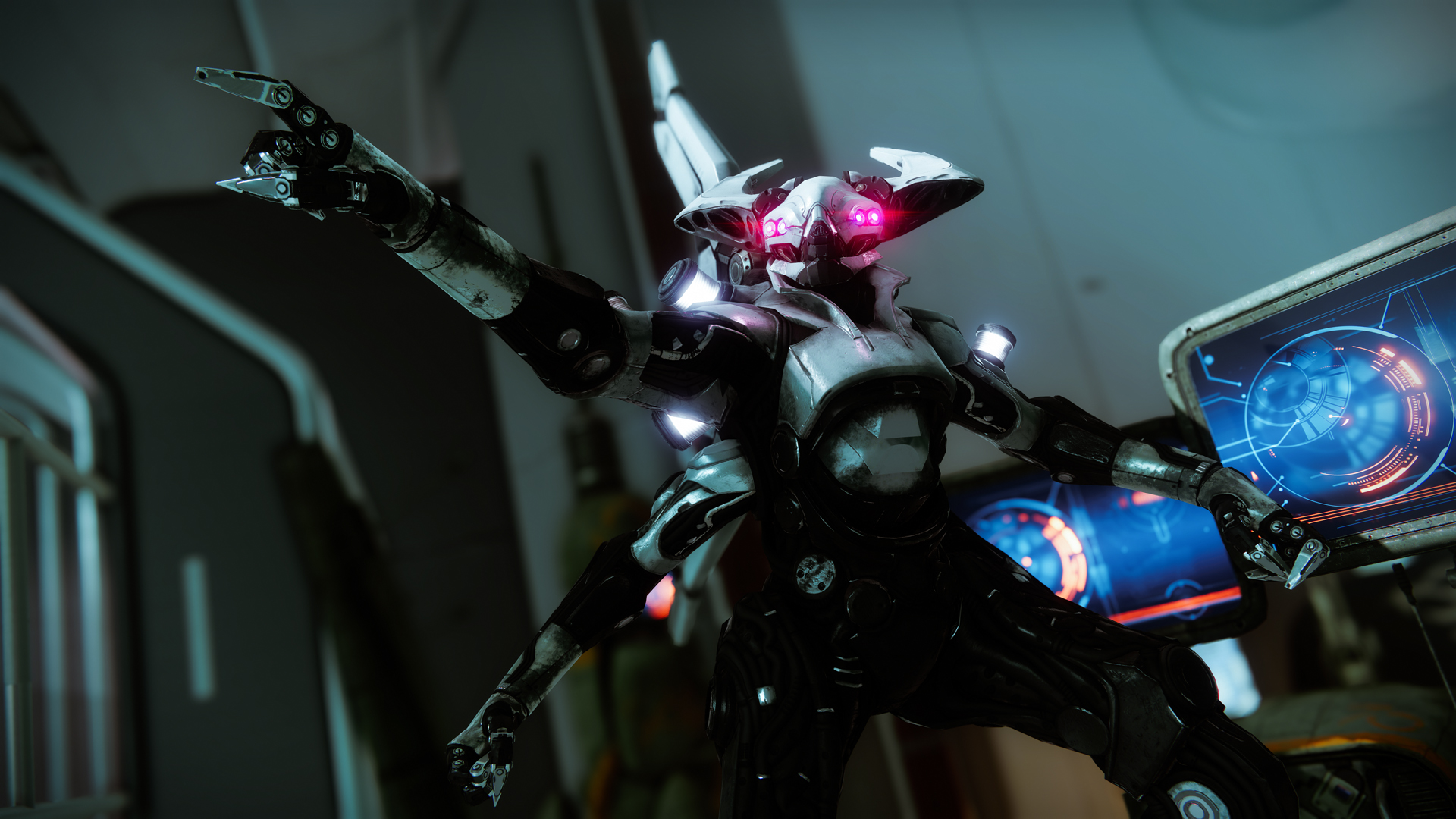 Each encounter has a chance to drop a Deepsight version of a raid weapon, and players may purchase one per week from the final chest after defeating Taniks. When Deep Stone Crypt is the featured raid of the week, encounter drops are uncapped! This means you can run a full raid and each encounter multiple times hunting for Deepsight drops.
When it comes to these weapons, there was quite a bit of excitement internally as the team started freshening up the perk pools. We asked one of our resident Sandbox experts, Senior Design Lead Chris Proctor, about their approach:

Proctor: When updating perk pools on older weapons, our goal is to keep the most beloved combinations and drop the rest to make room for new perks. With Deep Stone Crypt specifically, we looked for new perks that synergize well with the perks that originated with Deep Stone Crypt: Reconstruction, Recombination, and Redirection. (I.e., new perk combinations could look like: Reconstruction + Focused Fury, or Fourth Time's the Charm + Redirection).
We also took the opportunity to add perks to weapons that have never had them before. We’ve created quite a few new perks since Beyond Light shipped, and we’re excited to see how players mix and match for their builds.
Here are some that I'm personally excited for:

Oh, and we took this opportunity to create a new origin trait for the weapons: Bray Inheritance.

Wait, did Proctor just say that Reconstruction is going to be a crafted trait? Enhance! Owners of Beyond Light can start crafting these awesome raid weapons starting on December 6, 2022. We’ll see you in space next Season, Guardians.

With the excitement around upcoming Deep Stone crafting, we felt this would be a great opportunity to talk about some plans the team is eyeballing for the system overall. When crafting was introduced in The Witch Queen, we were very excited to see how players would engage with the feature. Having a direct path to acquiring a powerful perk or a "godroll" can be a bit risky in a game like Destiny, but we’re happy with how players are taking great advantage of what the system offers. That said, there are aspects that the team is looking to address, not only to help address player feedback, but to improve crafting overall. 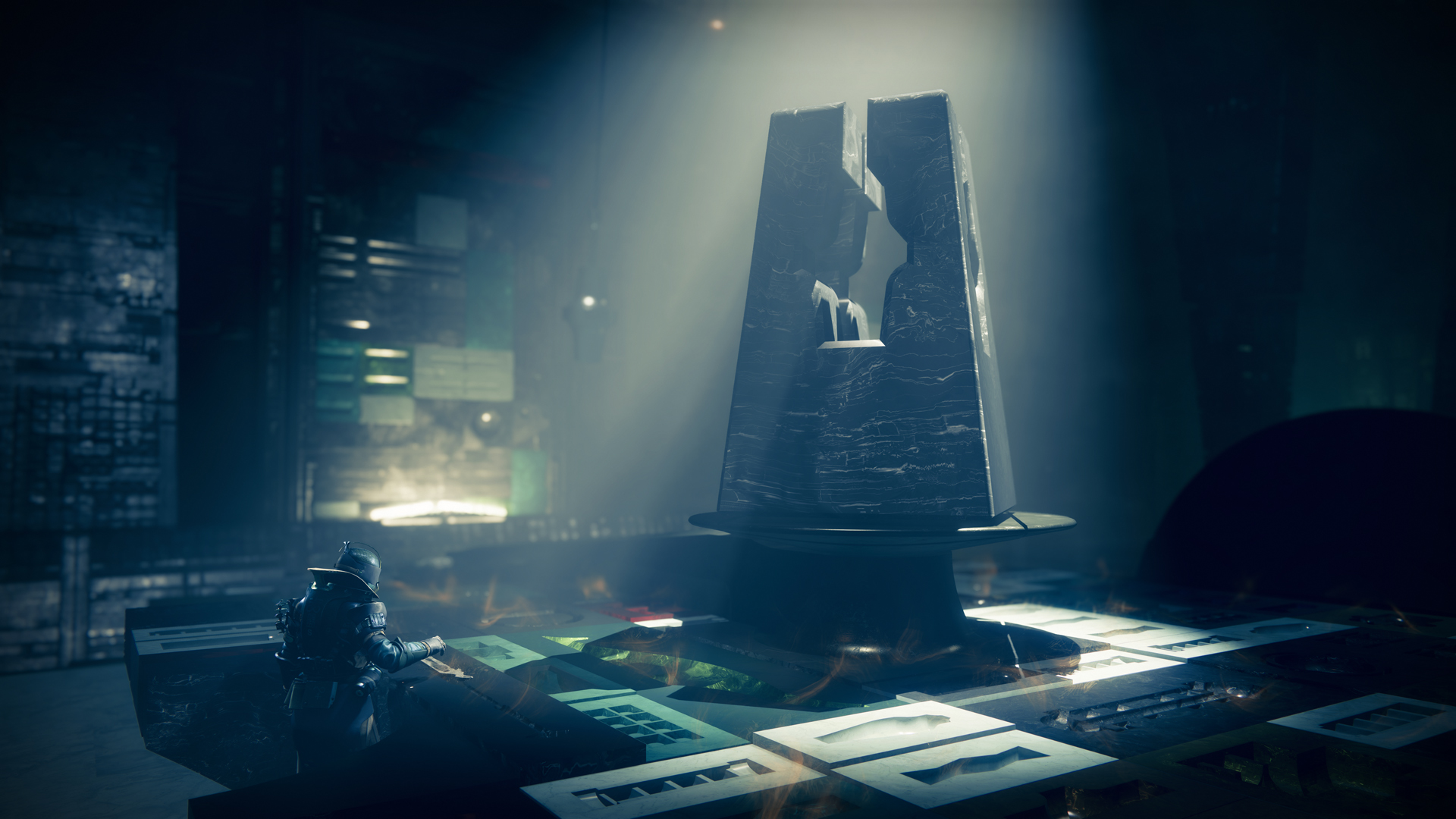 First, let’s start with some of the pain points that we’d like to address:
To address these points, the team is actively working on some changes coming with Lightfall. While these changes are being developed, tested, and finalized, we wanted to share our list of goals and some strategies behind them.
In the near term, we do want to give players a heads up. Starting in Lightfall, weapons that cannot be crafted will no longer drop with Deepsight. This will help us achieve our goal of reducing Deepsight weapon hoarding and help alleviate some stress on your vaults. Players who currently have these weapons in their inventory should complete their Deepsight objectives and extract their Resonant Elements before February 28 to avoid the loss of Resonant Elements.
Expect more details around the changes before Lightfall launches in February.

It’s been a while since we’ve challenged you in the ways of old, hasn’t it? No, not in the Prison of Elders, but a good old fashioned Bungie Bounty. For those who may be new around these parts, Bungie Bounties challenge you to find us, or a group of players from our community, and achieve victory in the target activity. If you snag that win? Well, you get a sweet emblem to commemorate your achievement.

When Bungie Bounties first formed, these primarily took place in PvP activities. For this go, we’re opening the funnel a bit. Starting November 1, we’ll be hosting Bungie Bounties across multiple game modes. Player vs. Player, Player vs. Enemy, and Player vs. Enemy vs. Player. We’ll have a little bit of Crucible, some strikes, some Gambit, and even a bit of Seasonal content for you to engage with. Seeing as though it’s still spooky season, we’re even looking to have some bounties take place in Haunted Lost Sectors.
Your targets for this Bounty? Well, you may recognize some of them. Since the release of Destiny, we’ve been graced by a group of community volunteers dedicated to helping players in need. Whether you’re hitting some connection issues or looking for workarounds on a given bug, our Community Mentors are ready to help you out in our #Help forums. Their tagline: White Gloves, Gold Standards. We’ll also have a few of our Community Ninjas on the prowl. If you’ve never seen or heard of them, that’s expected. They keep our forums clean by applying the banhammer where applicable. A few of them will be streaming for this Bounty to help you on your hunt, while others will be running through activities solo and under the radar, matching whoever the wind may bring to them.
Now, let’s get on to the rules and schedule.
Rules
Players must match with a Bungie Bounty target during their timeslot and win or complete the match.
Note: Habitually quitting activities during these Bounty timeframes can result in disqualification. Leaving too many matches can also result in your account being suspended from activities.
Schedule
We’ve got a bounty of participants from all around the world, so check the time zones to make sure you’re hunting for them at the appropriate time.
Tuesday, November 1
Wednesday, November 2
Thursday, November 3
We’re excited to light the Bounty beacons once more. Stay tuned for further announcements!

I Challenge You to a Duel – Prime Gaming Update

Ah, it’s a wonderful time of month. Here in the States, the leaves are falling, rain has returned, and I’m searching my house for gloves to keep my hands warm. With our Prime Gaming rewards update, we have a fun emote for you that includes a glove of sorts. Not for comfort, but to challenge your friends (or enemies) to a quick battle. If that battle goes sideways? Well, don’t worry – we've got a Ghost for your resurrection and a ship and Sparrow for you to high-tail it out of the fray. 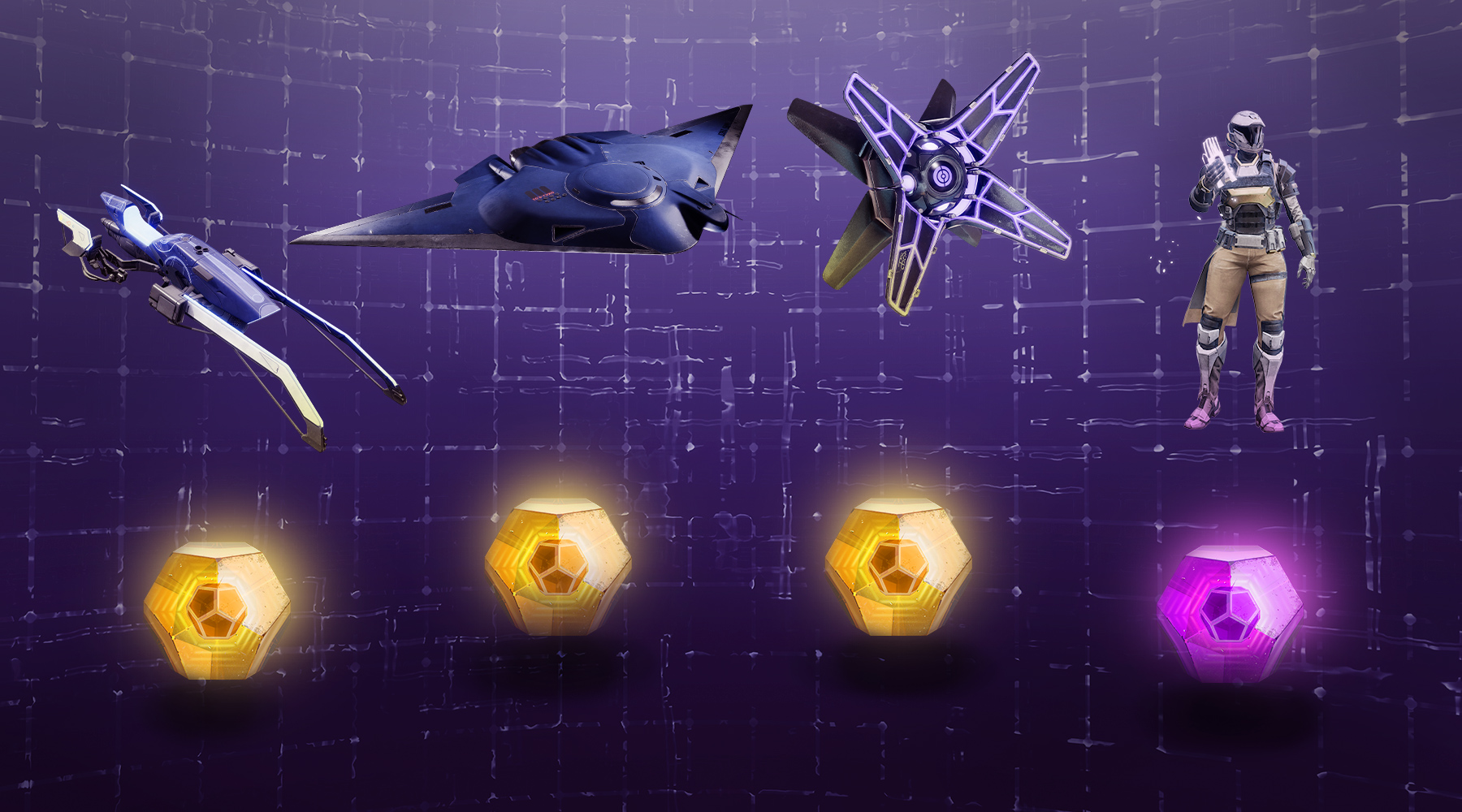 If you haven’t yet signed up for Prime Gaming, we highly recommend it! There are quite a few perks they have for you, including some monthly cosmetic rewards with Destiny 2. Check out our guide for more details.

There have been some spooky bugs popping up with Festival of the Lost. Spectral Pages gone missing, deceased weapons rising from the grave, and more. Player Support has the latest on what’s been fixed and what we’re still trying to exorcise from the game.
This is their report.
Known Issues List  |  Help Forums  |  Bungie Help Twitter
WORKAROUNDS FOR CONVERTING PAGES
Players still having issues converting their Spectral Pages into Manifested Pages should ensure that they:
If Spectral Pages aren’t converting into Manifested Pages after confirming the above, players may need to:
Complete a Haunted Lost Sector (Note that not all Spectral Pages will convert into Manifested Pages).
HOTFIX 6.2.5.2
Next Tuesday, November 1, Destiny 2 Hotfix 6.2.5.2 will be released. View our Destiny Server and Update Status page for maintenance times, as well as the timeline below (all times are Pacific):
KNOWN ISSUES
While we continue investigating various known issues, here is a list of the latest issues that were reported to us in our #Help forum:
For a full list of emergent issues in Destiny 2, players can review our Known Issues article. Players who observe other issues should report them to our #Help forum.

Sam: When it comes to this time of year, I really am quite a scaredy cat about anything spooky or creepy or alarming, but this was a really cool spin on storytelling that we think you might enjoy!
Movie of the Week: So hungry

Headphones on, volume up for this spooky #destiny2 video. Thanks to @notoklauren for the VA, she did great! #destiny2lore #MOTW @Cozmo23 pic.twitter.com/J15wFhwJjs

Bruno: So, it's that time of the year again! We wear amazing masks, collect tons of sweet candy, and put those spooky Headless Ones down for some loot (I love the new Mek-uh-ber Sniper Rifle). And we also listen to the awesome banter between Eido, Glint, and Drifter. Don't you love how innocent and sweet Eido and Glint are? And don't you love how creepy and good with nicknames uncle Drifter is? Because I do.
Art of the Week: Tales from the Haul

"You best start believing in ghost stories. You're in one!"

Ivan: Smallens attack… And they do it with their only weapon, which is cuteness. I’d give away all my candy to such a beautiful crowd.
Art of the Week: Happy Festival of the Lost, Eido and the House of Light!

And More Art of the Week: Titan – Mint condition 9.0

And even More Art of the Week: Cutest pumpkin I've ever seen

And the last AOTW, I promise: Colonelhead, ready for deployment

It’s been a while since I had the pleasure of writing one of these. It’s always a thrill to dive in just a bit deeper with what’s coming to Destiny and what the team is excited about. Make no mistake, these are honestly written by a good sized group of folks here at Bungie. Subject matter experts, editors, localizers, asset creators, and so many more. Some TWABs may be brief, and some may be massive, but each one is authored with the same amount of love. Thanks for stopping by for another blog installment.
Until next time, I’ll be dreaming of a fully crafted Trustee. Which DSC weapon are you most looking forward to? Holler at us in the comments.
Cheers,
dmg04