Sep 23, 2021 - Cozmo_BNG
This week at Bungie, we are heading to the lab.
Tomorrow, we are kicking off our first Trials Labs. These experimental weekends will allow us to test out targeted changes to the game mode and collect data and feedback on what works and what should remain an abomination of science. In keeping with our Trials revamp this Season, we are sticking to our “test and learn” mindset not only with Labs, but also with matchmaking, rewards, and other quality of life improvements.
This week, the normal Trials of Osiris playlist is replaced with Trials Labs: Capture Zone. This new mode is still Elimination, with the following changes:
Also for this week, double Trials rank points for every match! If you are feeling the blues of Fabled and Mythic, this is a great week to reset!

We tried something new for Trials this past weekend, something that has been requested in feedback since Trials launched back in Destiny 1. We tested out separating off flawless players (and their fireteams) from players who hadn't yet gone flawless that week. Before we discuss what to expect this week (and in the future) we'd like to talk about the goals we have for matchmaking in Trials of Osiris and look at some key data points for the first two weeks.
One of the main changes we made with Trials this Season was to allow solo and duo players to queue up. This had two main benefits:
Solo players are a key to the entire system working. For example, in our first week, a whopping 54% were full fireteams vs. solos/duos. Cut to this week, where only 45% were fireteams vs. solos/duos -- a pretty sharp drop.
To get enough solo players in, we need to offer rewards that are good enough and matchmaking that feels reasonable regardless of skill level. Right now, we have engrams that you can grind for, as well as attractive seven-win rewards, but only if you win.

We learned a lot from the first two weeks of solo matchmaking.
Most worryingly, the blowout rate for solo players went steadily up over the weekend. But then in the second weekend, the matchmaking changes pushed that rate back down.
This feels a lot better for solo players, but obviously it had some side effects for fireteams of mid-to-high skill. Long-term, we are looking to keep the solo win-rate above 30% and solo-fireteam blowouts under 33%.

We talked about blowouts as one way of looking for competitive matches. We also consider 5-1 matches as non-competitive. The sweet spot is really between 5-2 and 5-4. Those matches tend to feel good while playing, even if you end up losing.
In Week 1, we saw 60% of matches end at either 5-0 or 5-1. In Week 2, the number of non-competitive matches dropped to 52% -- a nice improvement, but we would like to see this number drop to 30-40% over the long-term.

Other Things that Worked

To address this, we are making two changes in Week 3:
In addition to the previously announced changes:
Looking further forward:
Iron Banner is back next week, so after Trials Labs: Capture Zone, Trials takes a week off and will return October 8!

Earlier today, we announced our first digital fashion magazine dedicated to showcasing the frabjous style of Guardians. This is your time to shine, in the first edition of Threads of Light. 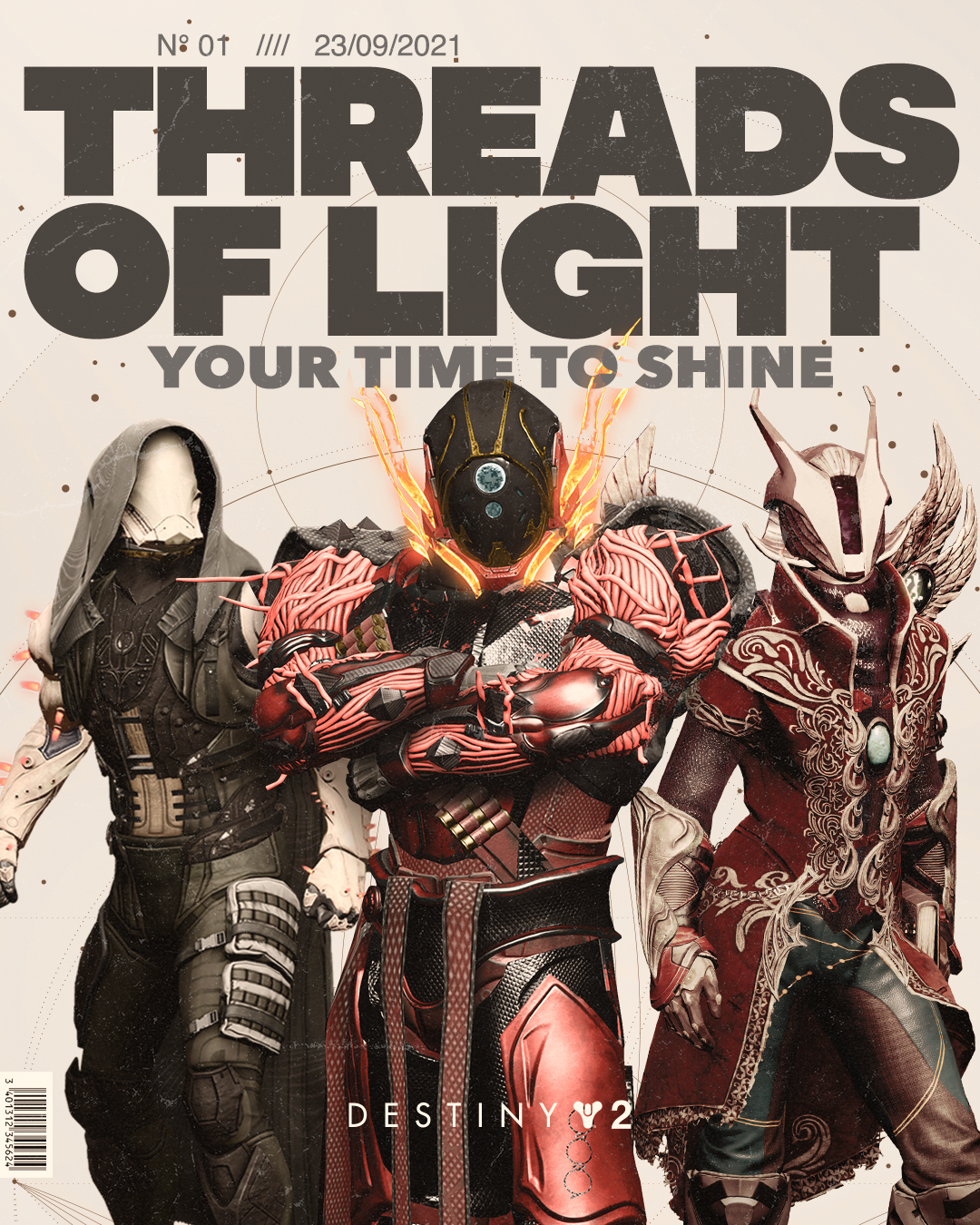 We partnered with three Guardians who had previously created their own fashion looks to highlight on our first cover. They posed for our cameras and outlined their looks for you to recreate. The next time you’re on the red carpet, be ready to answer the question “Who are you wearing?” with either Numley, Muffinbandit, or Vanguard Vogue. 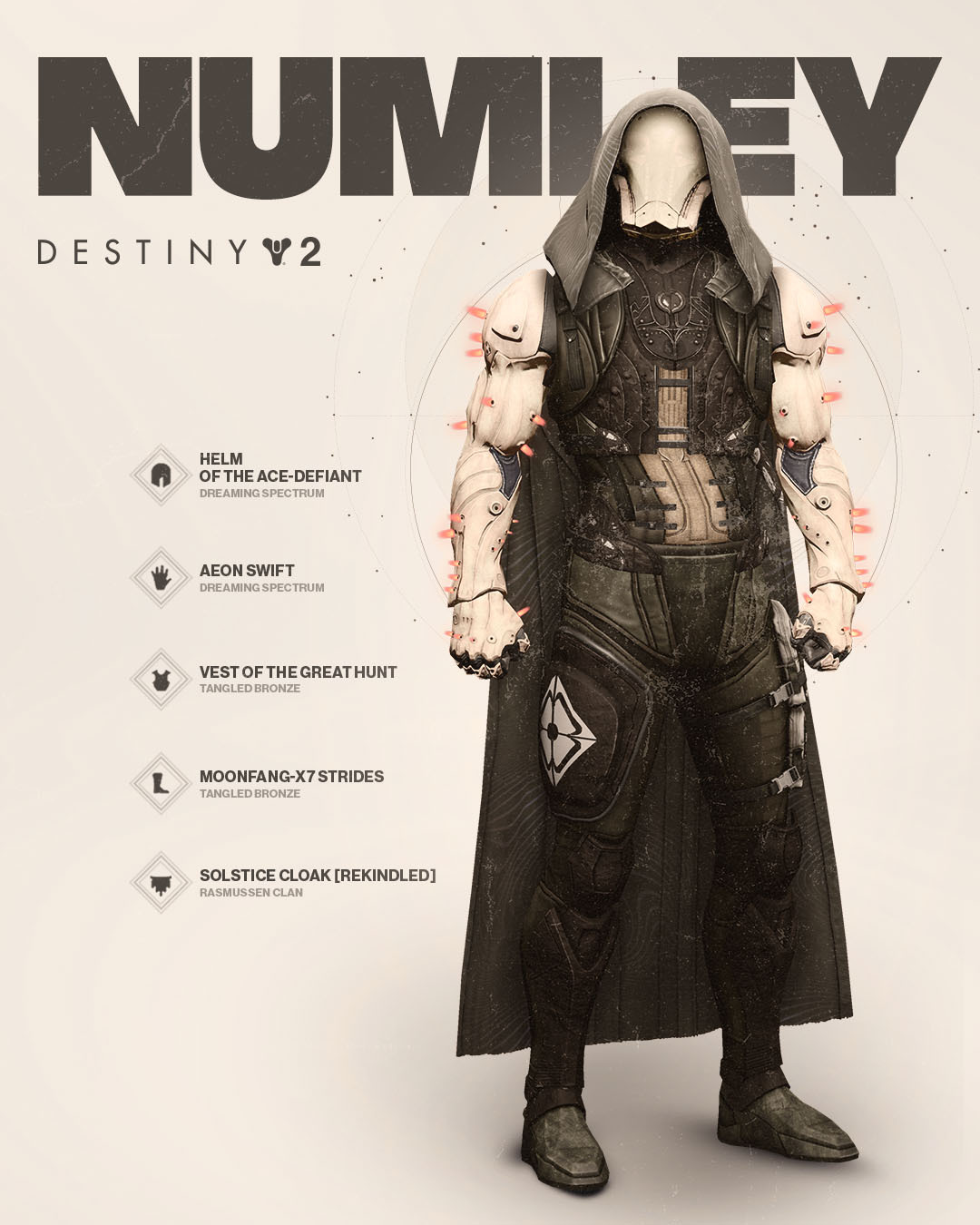 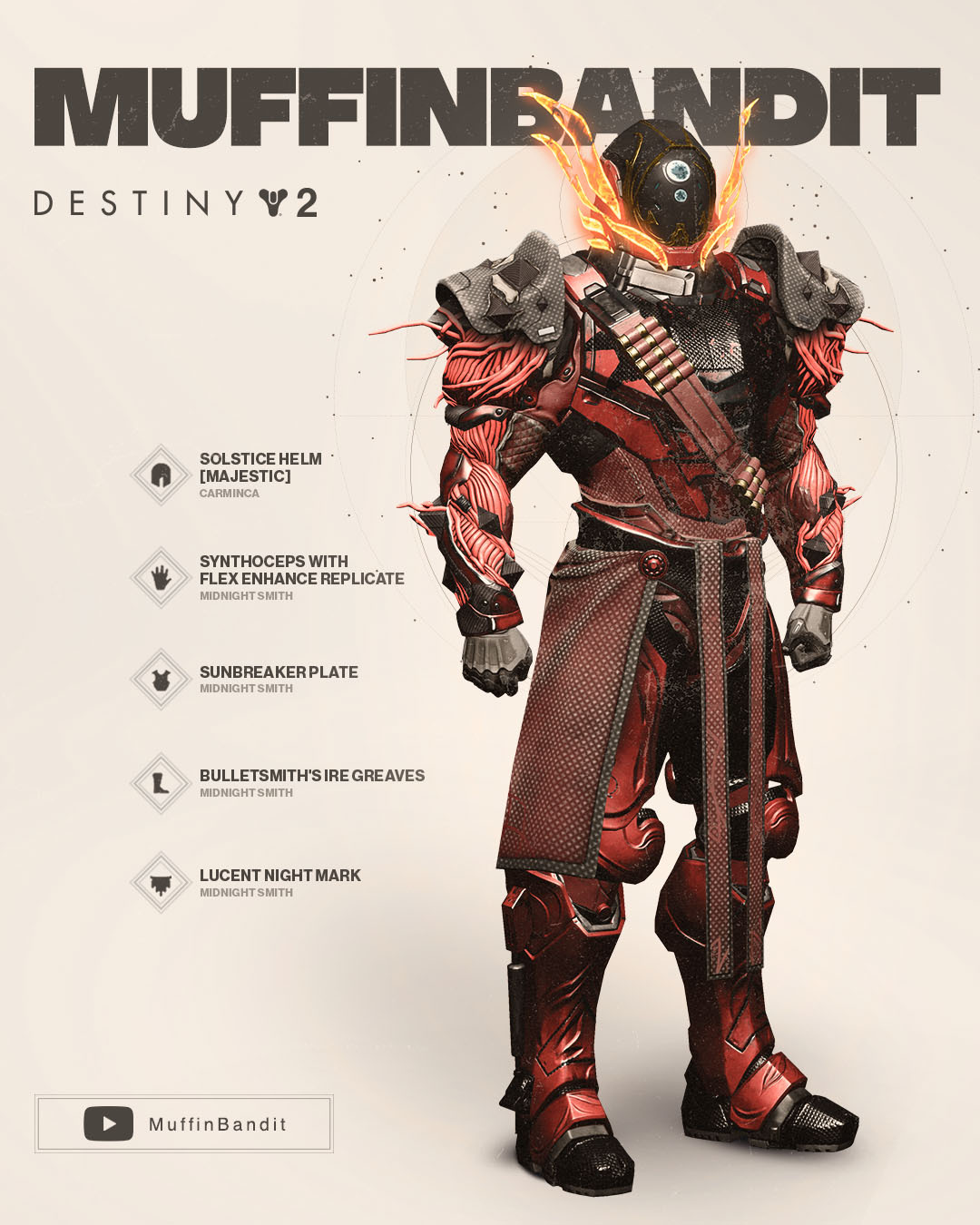 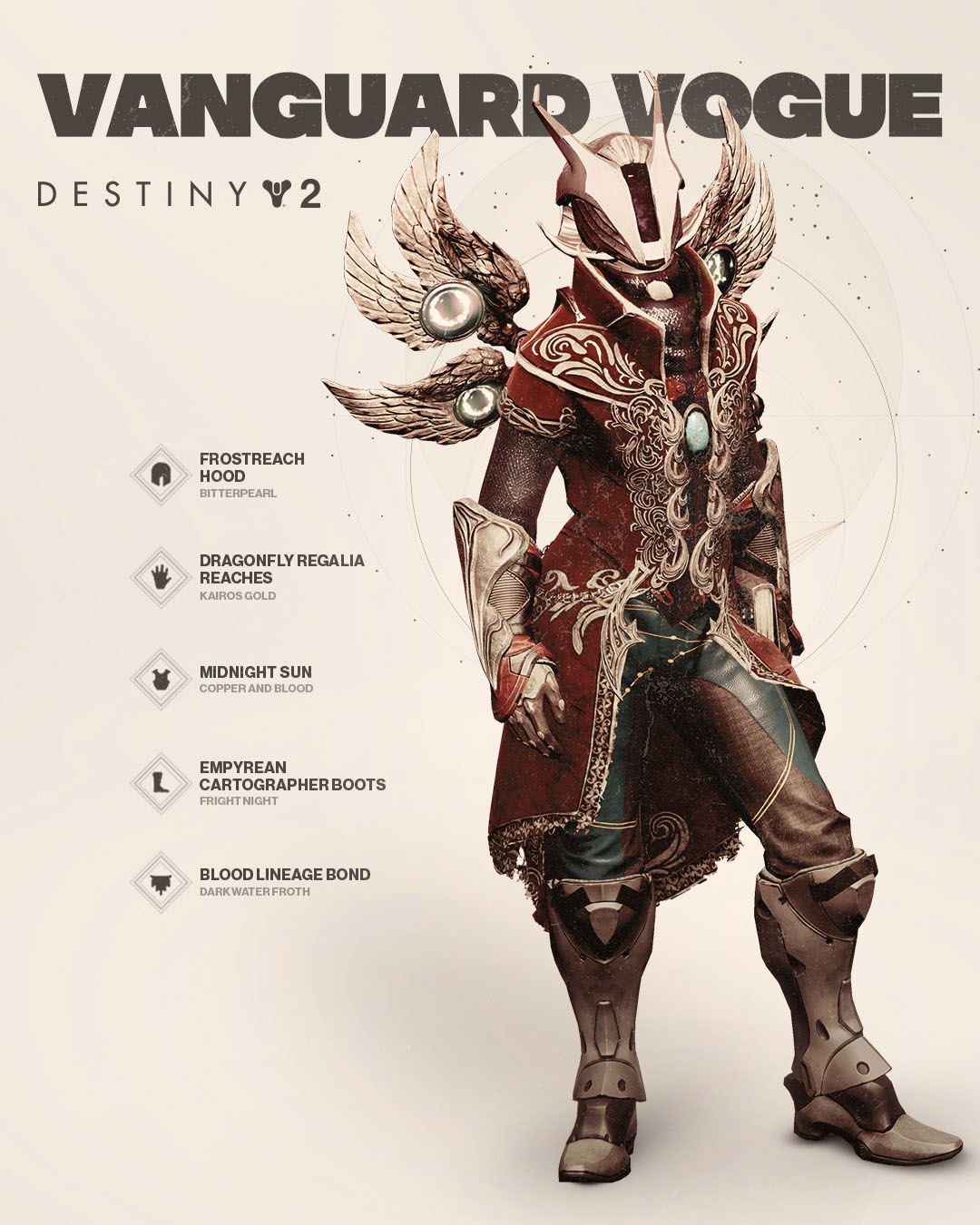 Your inner vanity might be whispering, “Hey, I want to be on the cover!” If you fancy your Guardian posing for the next edition of Threads of Light, we have good news for you. It’s time for another fashion show!
Similar to previous shows of fashion, we will be hunting for looks that catch our eye and sharing them on our suite of social channels across the globe. All you have to do to enter is share a shot of your Guardian’s appearance page and use #ThreadsOfLight on Instagram or Twitter. You can also tag @DestinyTheGame or our account for your region.
We will be picking winners until September 30, then will pick one of each class to be on the next cover of Threads of Light sometime in the next few months. Everyone we feature will still get the fashion show emblem, but only one Hunter, Titan, and Warlock will make it on the next cover.
Start digging through your wardrobes and creating your look. Good luck on the runway!

We refreshed our Prime Gaming rewards this week. If you’re not signed up, head over to the Prime Gaming portal and pick up your rewards from Amanda Holliday in the Tower. Here’s what we’ve got for you this month:

Another update went live this morning. Let’s check in with Player Support on what was fixed and what known issues are still being tracked.
This is their report.

THE CLASH AT COBALT’S HEAD

We have seen some questions about the new Cobalt Clash Flawless Shader and why it’s showing up in Collections. Design Lead Josh Kulinski has stepped up to the mic to share some answers.

We currently have a Collections entry for Cobalt Clash which states the source as: “Complete a flawless Trials Ticket.” While this is the means by which players gain access to gear with the shader applied to it, we were not specific enough with our wording here, as these shaders are bound to the gear and not unlocked for use on all items like other shaders in the game.

We apologize for the confusion and will be removing the Collections entry. Furthermore, we realize that this is not an ideal player experience, and we will be reevaluating how we distribute special shaders like this in the future.

It started with a rat infestation... then came the hornets. Now, our poor editor went to investigate a “drip, drip, drip” sound coming from his laundry room to find a leaky pipe and a massive alien-esque buildup of black mold under the sink. We need to all encourage our dearest TWAB editor, that now is the time to move. Anyways, welcome to Movie of the Week. This is where we pick our favorite videos from the community.
[Editor’s note: Infestation is a strong word.]
Movie of the Week: Striker

Movie of the Week: Counter Sniping

Congratulations to this week’s winners! If that’s you, please make sure you add a link to your Bungie.net profile in the description of the video.

Time to take a moment to appreciate the finer things. Every week we dig into the wide selection of community-created art and select a few to show off on our digital stage. Here are the pieces that caught our eye this week.
Art of the Week: "Truth and Power" time lapse

Art of the Week: Gamer Worm

If you see your art above, please make sure you make a reply to your post with a link to your Bungie.net profile so we can get your emblem sent out.
We’re excited to see what new fashion trends you start during the fashion show. It’s not just about the emblem and bragging rights – now you can land yourself on the cover of Threads of Light magazine!
That’s all for this week. I’m looking forward to trying out the Trials Labs changes tomorrow. I’m going to build a fireteam – so if you want to play, keep an eye on our LFG site on Bungie.net Friday evening. For everyone who will be playing this week remember, control that zone!
<3 Cozmo