May 6, 2021 - dmg04
This week at Bungie, Season of the Splicer was revealed!
If you’re the type of player that wants to go into a fresh Season of Destiny content with no knowledge of what’s to come, hopefully you’ve been living under a rock for the last two days. One of those old-fashioned rocks that don't have internet access. If you haven’t seen the trailer or any news about our upcoming Season, this is your final SPOILER WARNING.
Alright, still here? Cool. That means you’ve thrown caution to the wind and want to know more about the new Season before it’s out. Before we go on, watch the trailer. Doesn’t matter if you already have. Watch it again. We all need a little more neon in our lives.

Vex? Endless night? Mithrax? Baby Eliksni? Yeah. This is going to be a wild Season. Things will kick off with a bang, followed by activities, rewards, and more. We shared the Vault of Glass launch date last week, and now you can see everything from Iron Banner to the new 6-player offensive: Override. 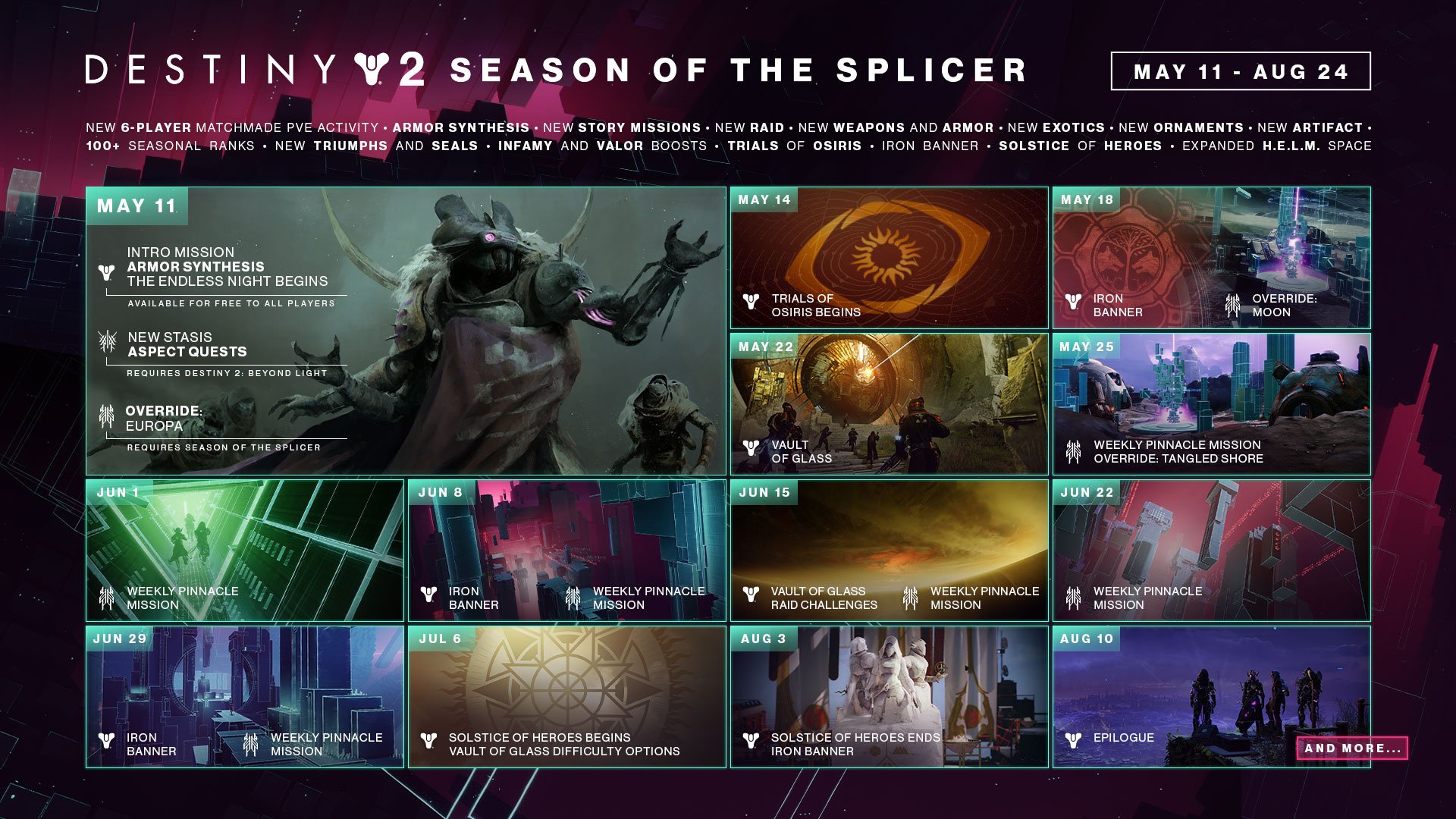 Want a handful of stunning visuals to go along with your details? Don’t miss out on the new Bungie.net Season of the Splicer page.

Loot is the name of the game for many a Guardian, so let’s get down to business. We’ll be working with the Fallen this Season, and we’ve got new armor pieces to earn. If you’ve ever wanted to embrace the Splicer lifestyle, this Season will be your chance. 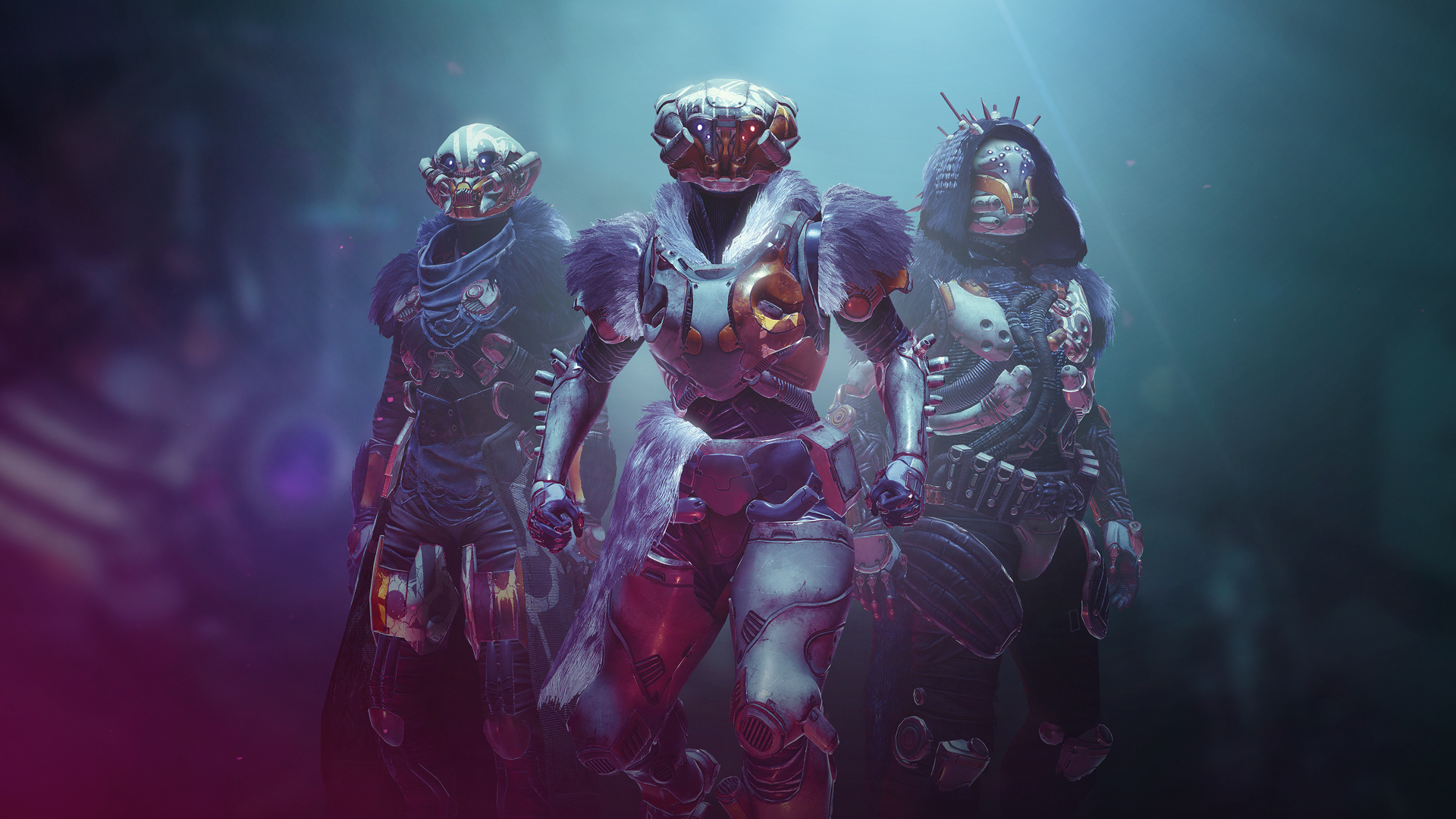 Previously, you would earn this armor by leveling your Season Rank and unlocking new pieces on the Seasonal Track. Moving forward, Seasonal Armor will be earned from Seasonal activities. You'll also be able to guarantee pieces from these sets using Focused Umbral Engrams. Season Rank levels that once featured armor have been updated with packages of Glimmer, Legendary Shards, Upgrade Modules, Exotic Engrams, Enhancement Cores, and Enhancement Prisms. Universal Armor Ornaments will continue to be earned towards the end of the Season Pass. 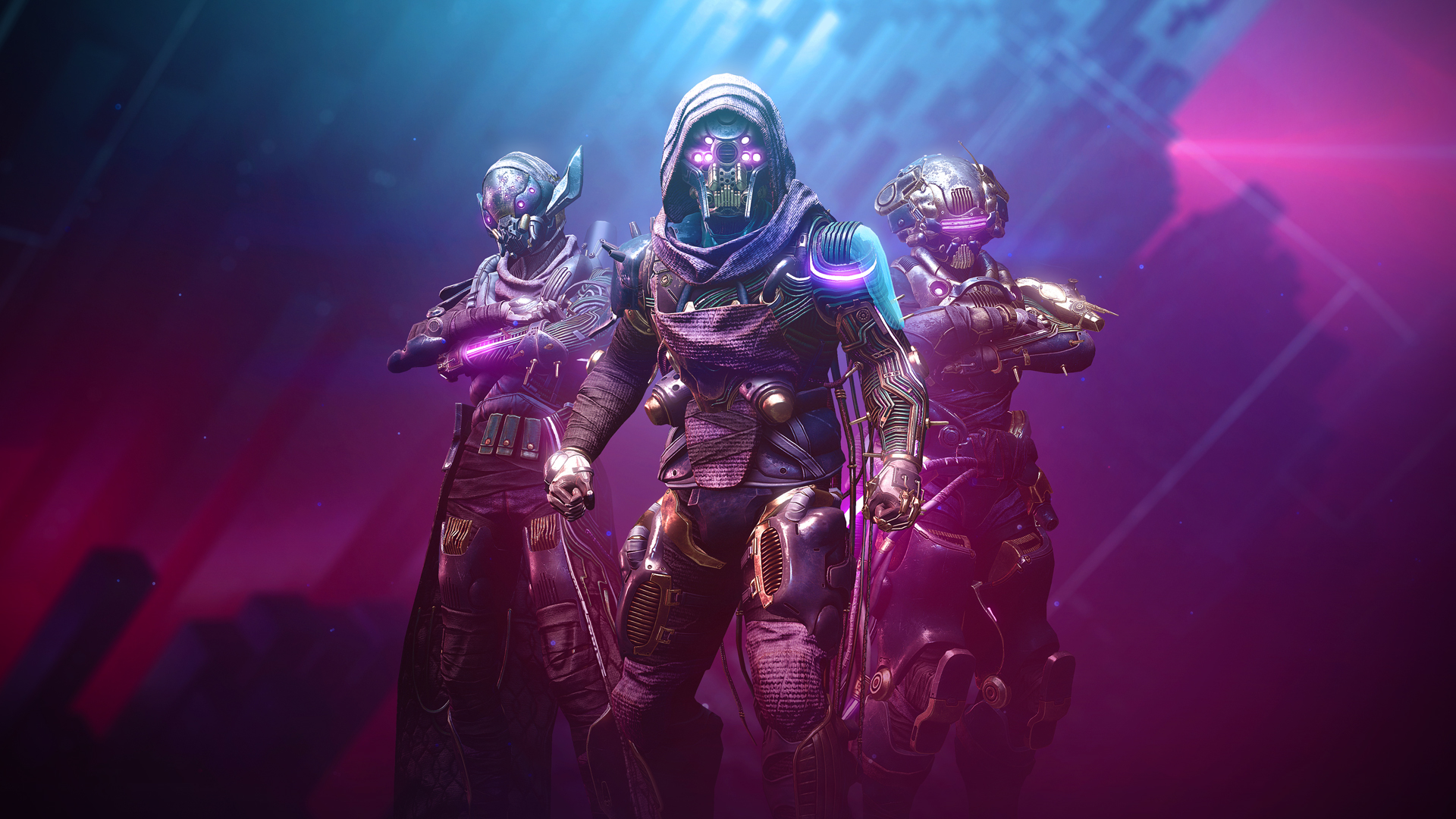 Now, let’s talk tools of destruction. There’s still gold to find in them Seasonal Rank hills. On the Seasonal Track, there will be three weapons to earn. Season Pass owners will unlock the new Exotic Sidearm on day-one of the Season as soon as they claim their first reward. Additionally, the new Shotgun and Heavy Machine Gun will be up for grabs as you level up.

If you want a full loadout of this style, we’ve got you covered. New weapons will be available through Umbral Engrams and Override completions. 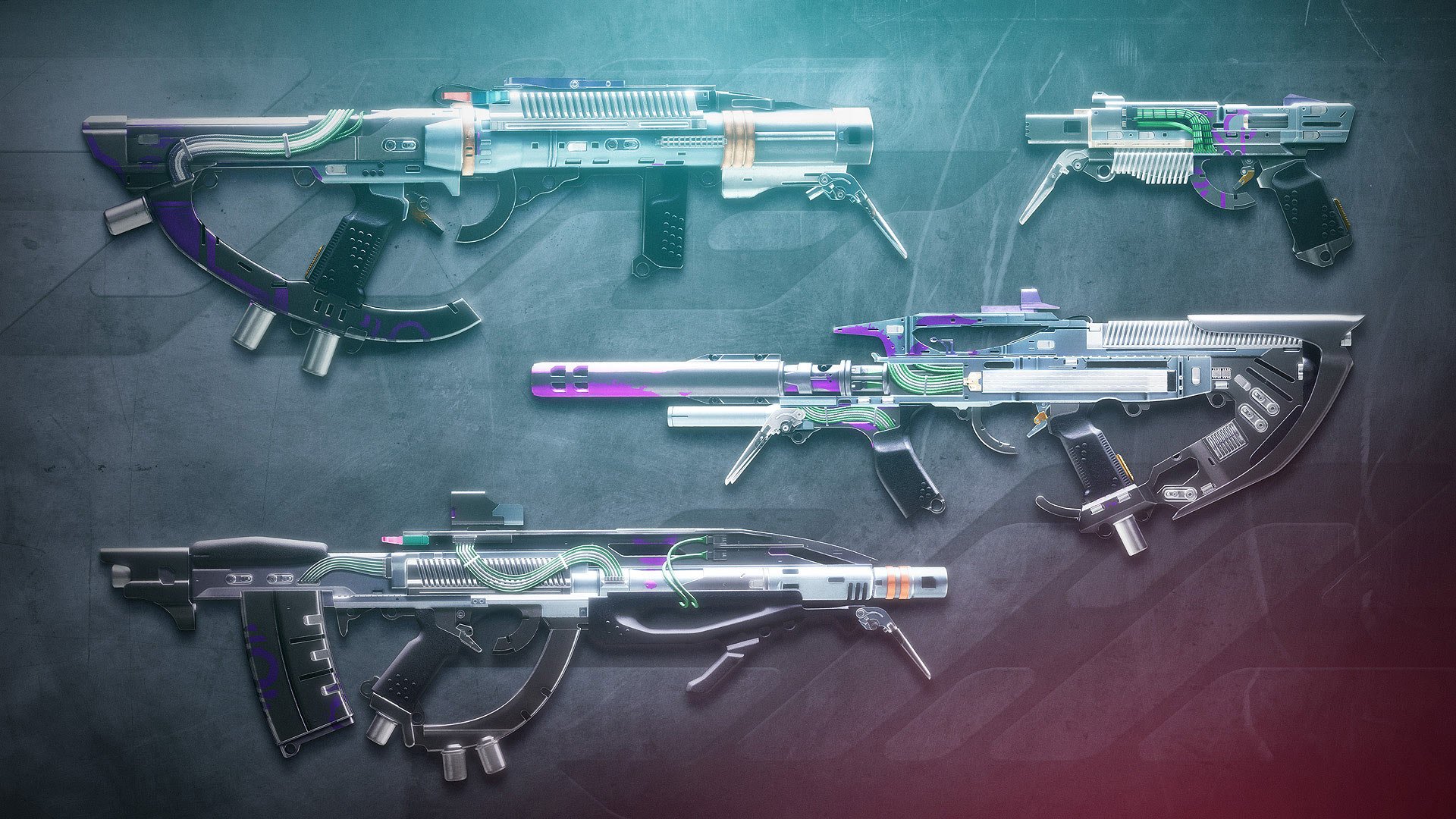 Outside of Override, there's even more Legendary loot to claim. To start, you'll receive a new quest to earn the Null Composure Fusion Rifle. Once the weapon is unlocked, you can collect Gambit, Crucible, and Vanguard themed weapon ornaments to further customize your style.

There are also weapons joining the current slate of post-game rewards for Gambit, Crucible, and Vanguard Strikes. In total, there will be 12 Legendary weapons to earn -- four per activity.

For the endgame focused Guardians out there, three familiar weapons will be up for grabs. We have no doubt the Destiny 1 veterans among you will recall these legends in an instant.
Like last Season, each weapon will be on a weekly rotation in Nightfall playlists. Upping the difficulty will give you a higher drop chance as you search for desired rolls. Starting June 22, Grandmaster Nightfalls will become available, introducing Adept versions of each weapon.

Now, here’s the part where we say, “and more.” There are still more weapons left for you to discover as you play.
Some of the best feelings in Destiny are those moments where you uncover a sweet weapon with the perfect perk combination. Want an Auto Rifle that gains extra damage after defeating an enemy with a grenade? How about a Sniper that’s quick on the draw, but can also be rolled with Dragonfly? Every Season invites interesting choices and new playstyles.
I’m personally amped for a new Pulse Rifle from the Seasonal offering that’ll fire quick with just a little kick, so to speak. The team has cooked up some fun new perks this season too, so you'll have some opportunity to mix some flavors you know with fresh ingredients. We haven’t even covered Artifact mods yet, which can turn some of these weapons up to 11.
Five days, and the hunt for loot begins anew. See you soon.

Each Season brings opportunities to address longstanding feedback items, or even make some backend changes to prepare for bright futures. Destiny 2 Update 3.2.0 has quite a few bullets in the changelist, but we’d like to highlight a few things that we’re pretty excited for! Let’s dive in:
Abilities, Aspects, and Fragments
Regarding future tuning plans, we also wanted to pull a word from Sandbox Discipline Lead Kevin Yanes:

Kevin: Hey all!
The Sandbox team is working on a slew of tuning updates over the next few Seasons. We're aware of key points of feedback in PvE and PvP. In update 3.2.0, we have a few minor changes to Stasis Hunters and some bug fixes that you see above. Here’s a quick list of some key places we're actively looking at for the future: Stasis Freeze, Slow accuracy penalties, and Whisper of Hedrons. We will share more with you soon.

Now, back to the patch notes preview!
Nav Mode (Menu that appears when pulling out your Ghost)
UI
H.E.L.M.
Glory, Valor, and Infamy
These changes are a precursor to some larger improvements planned for Season 15 (e.g., introducing Vanguard reputation, rebalancing Infamy to bring a reset in-line with Valor, and more). We’ll have more information on those changes in a few months!
Eververse
General Things...
Patch notes are planned to drop, in full, around 10 AM PDT next Tuesday, right alongside the release of Season of the Splicer.
Ah, and one more thing before we go. While the following won’t happen in Update 3.2.0, we have some news concerning 2018 and 2019 Solstice of Heroes Armor Glows. In the April 22 TWAB article, it was stated that glows for these armor sets would not be supported by Armor Synthesis due to technical issues. Since the new 2020 ornament mechanics were well received, we were able to rework/rebuild how 2018 and 2019 glows worked to address the community's request.
Our current plan is to make these glows into universal ornament sets like 2020 Solstice of Heroes Universal Armor Ornaments. This fix will have some limitations. These ornaments will not be updated to support Stasis, but will support Solar, Arc, or Void subclasses. In addition, the granted ornaments will be for the legendary armor set from each year only. Players who acquired any subclass type glow for that year/slot will receive the corresponding Legendary Universal Ornament for all three classes.
We are hoping to have this fix deployed by Solstice of Heroes 2021, but we cannot yet guarantee the date. Stay tuned to future TWAB’s for additional information.

There’s no such thing as a “final countdown” in a live-service environment. We’ve preformed this ritual many times before, but it’s just as exciting today as it was back in 2014. Player Support knows the song, and it’s almost time to dance.
This is their report.
SEASONAL TITLES AND BUNGIE REWARDS
Season of the Chosen ends on May 11. View our Update 3.2.0 timeline below for what time it will end, and Season of the Splicer begins.
Before the Season ends, players who earned the Chosen, Conqueror, and Flawless titles should claim and equip them to ensure that they don’t get removed.
Multiple Bungie Rewards should also be earned in-game before May 11 at 10 AM PDT, and claimed on the Bungie Rewards site by May 14, 2021, at 9:59 AM PDT:
SEASONAL CHALLENGES
As we announced earlier, when Season of the Chosen ends and Season of the Splicer begins, Seasonal Challenges from Season of the Chosen will be retired. Any Seasonal Challenges that are required to upgrade the War Table in the H.E.L.M. will still be available to complete.
SHADER UPKEEP
Beginning in Season of the Splicer, we are overhauling our shader system and how shaders can be applied to armor. Due to the overhaul, shaders will become permanent unlocks, and all shaders in player inventories will be removed. We encourage everyone to dismantle their shaders before Season of the Splicer begins to receive Glimmer and Legendary Shards.
UPDATE 3.2.0 AND MAINTENANCE TIMELINE
Friday, May 7, Destiny 2 will undergo maintenance in preparation for Destiny 2 Update 3.2.0. Below is a timeline of events. Note, some times may be subject to change during this maintenance period:
Next Tuesday, May 11, maintenance for the deployment of Update 3.2.0 will begin. Below is a timeline of events:
Below are some issues that will be resolved with Update 3.2.0. A complete list will be shared when the update goes live.
KNOWN ISSUES
While we continue investigating various known issues, here is a list of the latest issues that were reported to us in our #Help forum.
For a full list of emergent issues in Destiny 2, players can review our Known Issues article. Players who observe other issues should report them to our #Help forum.

Guardian Games is coming to a close this weekend, and one of our community members has the perfect dish to celebrate. Hunters, Titans, and Warlocks can all set aside their competitive spirit for an evening and come together to enjoy this beautiful meal.
Will there likely be an unspoken pie-eating contest taking place around the dinner table? Of course. Do we talk about it? No.
Movie of the Week: Guardian Games Pie

Movie of the Week: Wait, I know this song

If you’re submitting a video for Movie of the Week, make sure to tag it with #MOTW, include the Bungie.net profiles of contributors in the description, and upload it to the Creations page on Bungie.net.

Who knew baby Eliksni could be so cute? Seeing the outpouring of love since reveal has been wonderful. Artists throughout the community couldn’t contain themselves to words and expressed their adoration through some awesome imagery.
Art of the Week: Baby

Cheers to all the artists in the Destiny community. If you’d like your work to be featured, don’t forget to include a #Destiny, #Destiny2, or even #SeasonoftheSplicer tag with your posts.
We scroll through a lot of hashtags. Too many, some might say. We disagree.
That's it! You've arrived at the end of the TWAB. A few thousand words of fun, but every show must come to an end.

This week was a wonderful opportunity to show off some shiny new toys, but the real fun will kick off next Tuesday. The team will be watching as players embark on a new journey of discovery. While I said that earning new loot can be one of the best feelings in Destiny, I don’t think there’s anything more satisfying for us on the development side than seeing content finally get into your hands. New story, new lore, new loot, and hopefully some new friendships to make along the way.
Thanks for stopping by. See you again soon. This time next week, I'll be wearing some fancy new clothes as I start to prep for Vault of Glass...