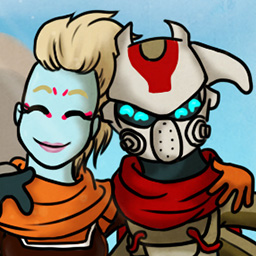 [Spoiler] previous chapter https://www.bungie.net/en/Forums/Post/254568862 [/spoiler] [spoiler] next chapter https://www.bungie.net/en/Forums/Post/254608782 [/spoiler] They both arrived at Agis' house, using a secret tunnel to enter the basement without being seen. The room had a complex array of machinery along with two metal beds. "lay down on one of these" it said slowly gesturing before laying down on the other. After the two had been rendered unconscious the ghost then began to slowly and methodically activate and deactivate various sections of the machinery before doing as instructed in an effort to transfer their light to the new body. There was bright lights and so much noise and then it all stopped and their was silence. The mechanical body, that was now the splicer rose after a minute but it was immediately obvious she had no memory of where she was or what she was doing. Upon noticing this the ghost suddenly had an idea. "Where am I?" she demanded to the small light. "you don't remember?" The ghost asked struggling to keep up the act. "no, I don't, Where am I and why am I here?" The splicer asked with less aggression in her tone. "Well, in that case..." the ghost paused realizing this was also an opportunity to give it's self a name like many other ghosts had instead of being referred to to as 'ghost'. "...I am Fragment, a mote of light from the traveler, you where here to negotiate peace with the city and you must have hit your head hard and since you've already completed your negotiation you should return to your people to spread word of the value of petitioning to join the city would bring them." The splicer took the Fragment's word as she couldn't remember anything to the contrary. "Thank you, Fragment." it said before leaving through the secret tunnels.The Fragment then turned to their guardian who at that moment began to wake up.
English
#lore #destiny2
Kommentieren Antworten Thema erstellen
Melden