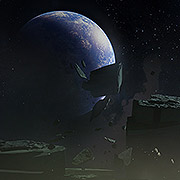 [b][i]Author's note:[/i][/b] Hello ladies and gentleguardians and welcome to the seventh chapter of Everything Changes. As always have a cookie and enjoy. [u]Transmission[/u] [i]Earth, Old America, Midwest[/i] The old motorcycle revved to life and Gage jumped for joy. He had been working on this old motorcycle for nearly a year now hoping to make it work once more. Now that it finally did he planned to take it for a test ride. An Ahamkara, taking the shape of a bird cawed and Gage looked at the pure black dragon bird. "What's up Nightingale?" he asked. Nightingale cawed again. Gage shrugged "It was worth it," he said. [i]Urgent transmission,[/i] His Ghost said appearing besides Nightingale. [i]The source of it is the Vault of Glass.[/i] Gage waved his hand and said "Put them on hold. It's time to ride." He hopped on the bike and revved the engine again. Gage hit the gas and the bike went flying down the road. "WHOOOOOOO," he screamed at the top of his lungs. "AS SHAXX WOULD SAY, THIS IS AMAZING." [i]Gage[/i] His Ghost said [i]THIS transmission could be important.[/i] "Alright, alright put it through." He responded as he slowed down and pulled over. A voice cut through his comms and said, "Gage, hey buddy it's Praedyth." Gage sighed loudly and cursed underneath his breath. "Haha no need for that. I just need a small favor. You se-" He was cut off by Gage who said "No, no never again." "Gage, at least hear me out." Praedyth pleaded. "Alright you have my attention." "Kabr is back Gage. You know what this means." Gage hopped off his motorcycle and started pacing. "He needs to go back to wherever he came from before the world changes. Before everything changes Gage." "I'm in" Gage said in a quiet voice. =--------------------------------------------------= [i]Mercury, Location classified.[/i] A small group of Titans were sparring when a transmission came through. A large Titan in Trials armor answered the transmission. He called out to a second Titan who was in the middle of a spar and he came over. "It's for you Balear." The Titan who answered the transmission said. "Thanks Marb." Balear said as Marb walked over to the other sparring Titans. Balear looked at the little radio that had picked up the transmission. A voice cut through the static and said "Balear are you there?" He looked at the radio in shock as the voice continued to speak. "I know you're there," It said. "It's Praedyth and I have news. Kabr Is back, and he's alive and well. So I need a favor and I need you to come into the Vault and help me and this team get Kabr back-" "No," Balear said in an angry voice. "Aw come on-" "Wait you can hear me?" "Obviously. This isn't a one way transmission you know." "Oh um." "So are you in or out?" "I'm out." "We need you. Please Balear I'm asking you as a friend." "Uggggggggggggh." Balear groaned, "Fine. I'm in. Have you called-" "Yes I have already called Gage, now only Osiris remains." "I'll be there in a few hours." "See you then Balear." The transmission cut out and Balear turned the radio off, not wanting to hear anything else. He sat down and grabbed a bottles of water. He took a long sip and said "Here we go." [u]End of Part One[/u] Catch up here: https://www.bungie.net/en/Forum/Post/151065243/0/0/1
English
#Story #Destiny #fanfiction #Caff #glossary #Everythingchanges
Kommentieren Antworten Thema erstellen
Melden